Genistein induced molecular changes in a squamous cell carcinoma of the head and neck cell line.

Epidemiological studies have shown lower incidence of breast and prostate cancers in Asian populations consuming a traditional diet rich in soy. Protection from these cancers was attributed to the isoflavones, particularly genistein and daidzein found in vivo as the major metabolites of soy isoflavones. However, the role of isoflavones in head and neck cancer is less clear. In our previous studies we reported that genistein can induce cell growth inhibition by arresting the cells at S/G2-M phases, and also induces apoptosis in HN4 squamous cell carcinoma of the head and neck cell line (HNSCC). In this report we show that these changes are accompanied by the down-regulation of Cdk1, and CyclinB1, and up-regulation of the cyclin dependent kinase (Cdk) inhibitor p21WAF1, which may be responsible for the induction of cell cycle arrest and apoptosis. The evidence for the induction of apoptosis was supported by the appearance of DNA ladder as reported previously, and further supported by our current results on the cleavage of poly-ADP-ribose polymerase (PARP), hallmark of apoptosis. This was also accompanied by the up-regulation of Bax, with modest down-regulation of Bcl-2 protein expression, which changes the balance between pro- and anti-apoptosis molecules in favor of pro-apoptosis. Furthermore, we also observed down-regulation and degradation of Cdc25C, which is a marker of cell proliferation, and plays important role in CyclinB-Cdk1 complex activation. The down-regulation followed by the degradation of Cdc25C is an indicator of G2/M arrest and anti-proliferation effects of genistein. Collectively, these data provide strong molecular evidence for the anti-tumor activity of genistein in HNSCC cells. 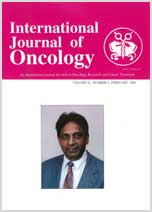