Ovarian cancer remains the leading cause of death from gynecologic malignancy in Western countries. This cancer results from a succession of genetic alterations involving oncogenes and tumor suppressor genes which have a critical role in normal cell growth regulation. Mutations and/or overexpression of three oncogenes, HER-2/neu, c-myc and K-ras, and of the tumor suppressor gene p53, have frequently been observed in sporadic ovarian cancer. In the context of high risk families, the most frequently involved genes are BRCA1 and BRCA2. We review the function of these different proteins, the incidence of mutations in their genes in carcinogenesis and as potential prognostic factors in sporadic and hereditary ovarian cancer. 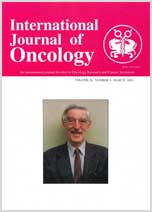