Effect of p16INK4a on chemosensitivity in nasopharyngeal carcinoma cells.

The p16INK4a tumor suppressor gene is frequently inactivated in nasopharyngeal carcinoma (NPC) and hence it may play an important role in the suppression of this tumor. In order to study the effect of p16INK4a restoration in NPC cells, full-length human p16INK4a gene was transfected into a NPC cell line, CNE1. Four individual clones with differential levels of p16INK4a protein expression, were selected for further studies. The introduction of p16INK4a into CNE1 cells induced growth suppression through G0/G1 cell cycle arrest; however, the cell growth rate was not correlated to the levels of p16INK4a protein expression. To study whether transfection of p16INK4a could protect NPC cells from radiation, cisplatin and 5-fluorouracil (5FU), the cellular sensitivity of p16INK4a transfectants and vector control were investigated. An increase in sensitivity to 5FU was observed (2-fold compared to IC50) in all 4 clones compared to vector-transfected control. P16INK4a transfection also resulted in increased sensitivity to cisplatin (1.5-1.8-fold) in 3 out of 4 cell lines. However, no difference in radiosensitivity was found between the p16INK4a transfectants and the control. These findings indicate that p16INK4a suppresses NPC cell growth through G0/G1 arrest and modulating cellular response to chemotherapeutic drugs in NPC cells. Therefore, restoration of p16INK4a may have a therapeutic purpose in the treatment of NPC. 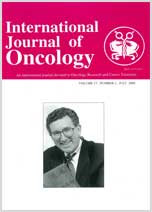