The proper structure of the extracellular matrix, in particular of the basement membrane and the adjacent interstitial matrix, are essential prerequisits for a proper function of tissues. Invasive growth in malignant tumors is associated with a destruction of various matrix structures. Due to extensive recent analyses significant advances have been made in the knowledge of the structure of the extracellular matrix, the composition of its most important constituents, their metabolism and that of matrix degrading enzymes. This information provides insight into the pathophysiology of malignant growth. Thereby, it has been shown that malignant tumor growth is associated with a loss of basement membrane (BM) material which, however, disappears not homogeneously, but affects various BM components to different degree. The loss of an intact BM as the first barrier is therefore the initial step of tumor invasion. Despite this loss there is evidence that the de novo synthesis of BM constituents in tumor and adjacent stromal cells is enhanced. Thus, it is obvious that BM material is degraded during the invasion process to significant degree. In addition, since there is a positive correlation between the amount of retained peritumoral BM and a higher degree of tumor cell differentiation the amount of retained BM material seems to represent a marker for the biological behaviour of the tumor cells. The loss of BM material is well explained by a significant expression of major matrix degrading enzymes, the matrix metalloproteinases (MMPs) both on the mRNA and protein level. Here again, there is considerable data indicating that both tumor and stroma cells are involved in the MMP synthesis. In addition to the loss of BM substances, the interstitial extracellular matrix (ECM) is disarranged. This disarrangement may comprise enhanced de novo synthesis ( 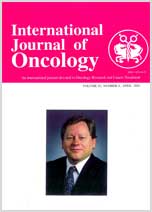