The molecular details of hypoxia-induced cellular responses have been difficult to identify since there is as yet no known oxygen receptor. We used cDNA microarray technology to extend our studies pertaining to these molecular details in human hepatocellular carcinoma (Hep3B) cells that produce erythropoietin (Epo) in response to hypoxia. Of approximately 1200 genes in the array, those associated with integrin-linked kinase (ILK), fibronectin precursor and glycogen synthase kinase-3β (GSK-3β) were markedly stimulated after exposure of Hep3B cells to low oxygen (1%) for 6 h. Epo, HIF-1, and von Hippel-Lindau cDNAs were measured in parallel as markers of low oxygen responses in Hep3B cells. ILK is a serine, threonine protein kinase that interacts with the cytoplasmic domains of integrin β1 and β3. This interaction localizes ILK to focal adhesion plaques. ILK is stimulated by cell-fibronectin interaction as well as insulin. It is regulated in a phosphatidylinositol 3-kinase dependent manner and can phosphorylate protein kinase B (PKB/AKT) and GSK-3β. As a result of these and other activities ILK has been shown to affect anchorage-independent cell survival, cell cycle progression and tumorigenesis in nude mice. ILK has also been implicated in the Wnt pathway and as a critical target in PTEN-dependent tumor therapies. To our knowledge this is the first report implicating the ILK pathway in low oxygen responses. Other genes identified as a result of the microarray analysis not previously known to change as a result of low oxygen treatment were elongation factor-1α, glycyl-tRNA synthetase, and laminin receptor protein-1. These findings were all corroborated by RT-PCR assays and in some instances Western blot analysis. 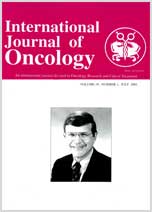