The relation between the consumption of cruciferous vegetables and reduced prostate cancer occurrence has been documented, although the responsible phytochemicals are unknown. The effects of sulforaphane (SFN) which occurs as the precursor glucosinolate in broccoli and other cruciferous vegetables, and its metabolite N-acetylcysteine conjugate (SFN-NAC) on prostate cancer cells were investigated. SFN and SFN-NAC were analyzed with the androgen-dependent human prostate cancer LNCaP cell line model. Cell growth and apoptosis were determined with the expression of androgen receptor and prostate specific antigen, DNA synthesis, cell cycle progression, DNA strand breaks and caspase activation to ascertain the effects and mechanism. SFN and SFN-NAC were demonstrated for the first time to mediate a dose-dependent apoptosis and growth arrest in the prostate cancer cells. Caspases were activated and DNA strand breaks were detected in apoptotic cells. The expression of phosphorylated and dephosphorylated androgen receptors, and the production of prostate specific antigen were attenuated. The expression of cyclin D1 and DNA synthesis were inhibited along with G1 cell cycle block, causing decreased cell density and growth. SFN and its metabolite SFN-NAC have similar activities to induce growth arrest and apoptosis, indicating that the effects of SFN are maintained through the metabolic processes. SFN as a dietary component of cruciferous vegetables active in the prevention of prostate cancer is discussed. 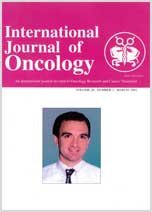