Telomerase in relation to expression of p53, c-Myc and estrogen receptor in ovarian tumours 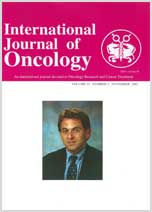