Radiotherapy is widely used in the treatment of breast cancer and reduces the risk of loco-regional recurrence. Overexpression of the erbB2 receptor occurs in 20-30% of all breast cancers, and seems to be involved in chemotherapeutic resistance of breast cancer cells and radioresistance of lung cancer cells. The hypothesis of this study was that erbB2 confers resistance to radiation-induced apoptosis in breast cancer cells through the phosphatidylinositol 3-kinase (PI3-K)/Akt signalling pathway. Two human breast cancer cell lines were used, BT-474 and MCF-7. BT-474 cells overexpress erbB2 and have mutated p53, while MCF-7 have normal expression of erbB2 and functional p53. The cells were treated with the PI3-K inhibitor wortmannin or the erbB receptor ligand heregulin-β1, which is expressed by both malignant and stromal cells in vivo. After pharmacological treatment, the cells were irradiated with 10 Gy γ-radiation. Consistent with the p53 status in the cell lines, γ-radiation caused G1 arrest in MCF-7 cells, but not in BT-474 cells. 10 Gy γ-radiation increased apoptosis by on an average 76% (95% CI, 44-109%) in MCF-7. Treatment of MCF-7 with heregulin-β1 decreased apoptosis by 66% (95% CI, 48-84%) compared to the untreated controls. In BT-474 cells, wortmannin in combination with radiation resulted in 119% (95% CI, 76-161%) more apoptosis compared to wortmannin alone, whereas radiation alone resulted in 45% (95% CI, 15-75%) increased apoptosis. This radiosensitising effect was not seen in MCF-7. Furthermore, transfection of MCF-7 cells with constitutively active Akt made the cells more resistant against apoptosis. Taken together, our results support the hypothesis that the erbB2/PI3-K/Akt signalling pathway is involved in resistance to radiation-induced apoptosis in breast cancer cells in which this signalling pathway is overstimulated. 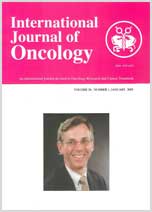