Conjugated linoleic acid (CLA) refers to a group of naturally occurring positional and geometrical conjugated dienoic isomers of linoleic acid (C18:2), of which the cis-9,trans-11 (c9,t11) and trans-10,cis-12 (t10,c12) isomers predominate. Accumulating evidence has demonstrated that CLA isomers are capable of inhibiting the growth of a variety of cancer cell lines in vitro; however, their modulatory effects on the proliferation and differentiation of myeloid leukemia cells remain poorly understood. In the present study, CLA was shown to inhibit the proliferation of murine myeloid leukemia WEHI-3B JCS cells in a dose- and time-dependent manner. Morphological, flow cytometric and functional analyses revealed that CLA induced the differentiation of WEHI-3B JCS cells into matured macrophage-like cells, as indicated by increases in the cytoplasm:nucleus ratio and vacuolation, the expression of macrophage differentiation antigens (Mac-1 and F4/80) and the enhanced monocytic serine esterase activity of CLA-treated WEHI-3B JCS cells. RT-PCR analysis showed that CLA up-regulated the expression of TNF-α, IL-1β and IFN-γ genes in WEHI-3B JCS cells, which had previously been shown to play an important role in triggering the differentiation of myeloid leukemia cells. Moreover, CLA-treated WEHI-3B JCS cells had also shown reduced tumorigenicity in vivo. Collectively, our results indicate that CLA might exert its growth-inhibitory effects on myeloid leukemia cells by triggering their terminal differentiation, which is mediated, at least in part, by modulation of the cytokine gene expression in the leukemia cells. 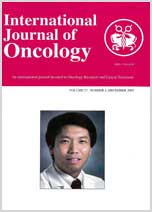