Targeting gene expression to cancer cells remains a challenge for the development of gene and viral therapy for gliomas. Recent studies have highlighted transcriptional targeting as one of the possible solutions to overcome this limitation. In this context, melanoma associated antigens (MAAs) are usually over-expressed in brain tumors in comparison to normal brain tissue. For this reason, we investigated the use of the tyrosinase promoter as a transcriptional element to target oncolytic therapy for gliomas. Tyrosinase mRNA expression was evaluated by qRT-PCR in normal human brain tissue as well as in human glioma specimens. We found that this gene was significantly over-expressed in glioma cell lines and in primary glioma samples. Tyrosinase expression correlated with the grade of the tumor (p-value range: 0.05-0.001). Furthermore, transfection of several cell cultures with human and mouse tyrosinase promoters driving a luciferase reporter gene confirmed the activity of this promoter in mouse and human cells. To evaluate whether tyrosinase-activated conditionally replicative adenoviruses (CRAds) could induce toxicity in glioma cells, two vectors (Ad h/m and Ad24TYR) were tested in a mouse glioma model. C57BL/6 mice underwent intracranial injection of tumor cell line GL261. Survival was used to evaluate efficacy of the tested vectors. Mice receiving 1x109 MOI of Ad h/m and Ad24TYR following intracranial tumor implants had a median survival of 46±3 days (p<0.05); in contrast, those treated with medium had a median survival of 31±2 days. These results suggest that injection of tyrosinase CRAds leads to prolongation of survival in mice with experimental brain tumors. The tyrosinase promoter stands as a proof of principle of the potential use of MAA over-expression patterns for targeting novel anti-glioma therapies. 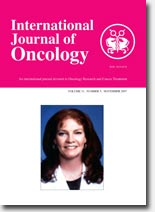