The influence of dihydrotestosterone (DHT), the epithelial growth factor (EGF) and the basic fibroblast growth factor (bFGF) was investigated on LNCaP, DU145 and PC3 cell growth, which represents the ratio between cell gain (cell proliferation) and cell loss (cell death). In the present study, cell growth was assessed by means of the computer-assisted microscope analysis of Feulgen-stained nuclei combined with the mathematical Delaunay triangulation and Voronoi paving techniques, which enabled the cell colony patterns, i.e. their density and level of organisation, to be determined. The results from a previous study (Janssen et al, Prostate, in press) combined with those of the present one show that DHT was found to activate proliferation of the LNCaP model, as evidenced by increase in size of colonies, increase in number of cells within colonies, increase in cell colony density and, accordingly, decrease in mean segment length value (which is the distance between adjacent cell nuclei). Using the same criteria, DHT was found inhibitory on growth of DU145 cell line, and devoid of significant effect on PC3 cell line. Basic FGF was found to be a powerful stimulator of growth of PC3 cell Line and to induce a weaker stimulation of DU145 cell line. On LNCaP cell line, it increased the size of colonies without increase of the number of cells per colony. This feature can be explained by a decrease in cell colony density. With respect to the same colonies, the proliferation index (percentage of cells in the S+G2 phases of the cell cycle) was found similar to that of the controls. This suggests that the increase in the size of the colonies is due to a difference of spreading of the cells on their supports. EGF had no significant effect on LNCaP and PC3 models, and was decreasing cell density of DU145 colonies. 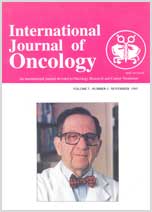