Spontaneous tumor regression is still one of the most puzzling events in human cancer. A cell culture model of malignant transformation designed to permit the study of this phenomenon in vitro was applied to examine reversion and re-expression of the transformed phenotype in two X-ray transformed mouse 10T1/2 cell clones. By alternating cell passages at low and high seeding density, the expression of cell contact inhibition and tumorigenic capacity were both reverted and restored. Growth of non-transformed wild-type cells was not affected by seeding density. This reversion of the transformed phenotype was associated with a modification in genomic 5-methylcytosine content. Initially, the transformed clones were hypomethylated, as occurs in most human tumors. After only four passages at low seeding density, the phenotype was reverted to that of non-transformed 10T1/2 cells and genomic 5-methylcytosine content was significantly increased to levels measured in non-transformed C3H/10T1/2 mouse cells. Thus, hypomethylation induced by ionizing radiation was not a permanent feature of malignantly transformed 10T1/2 cells. Although genomic 5-methylcytosine content returned to normal levels during low density passaging, the methylation pattern of the c-myc gene specifically was not associated with cell passages either at low or high seeding density. In an attempt to identify genes involved in this process, expression of the tumor suppressor gene p53 was measured. Western blot analysis failed to detect any correlation between expression of p53 protein and reversion of the transformed phenotype. The results of this study indicate that the transformed phenotype is not permanently associated with the malignant transformation of C3H/1OT1/2 cells, and can be modulated by growth conditions in vitro. We propose that modulation of genomic 5-methylcytosine levels may be involved in this process. 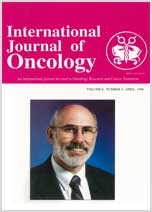