Cachexia is a common systemic manifestation. Additionally, myostatin is known to be a negative regulator of skeletal muscle development. The present study aimed to investigate whether formoterol down-regulates the myostatin system in skeletal muscle of tumour-bearing rats. Real-time PCR and Western blotting were used for the analysis. Results showed that rats bearing the Yoshida AH-130 ascites hepatoma, a cachexia-inducing tumour, exhibited marked muscle wasting that affected the mass of the muscles studied. The cachectic animals exhibited a significant increase in the mRNA levels of the myostatin receptor (ActIIB) in gastrocnemius muscles. Notably, the expression of the various forms of follistatin, a protein with the opposite effects to those of myostatin, was significantly reduced as a result of the implantation of the tumour. When the animals were treated with formoterol, a β-agonist with anti-cachectic potential, increases in skeletal muscle weights were observed. The β-agonist significantly increased levels of various follistatin isoforms and significantly decreased the expression levels of the myostatin receptor. In addition, formoterol treatment resulted in a significant decrease of the myostatin protein content of the gastrocnemius muscle. In conclusion, the results presented indicate that certain anabolic actions of formoterol on the skeletal muscle of cachectic animals may be mediated via the myostatin system.

In advanced malignant diseases, cachexia appears to be one of the most common systemic manifestations. The presence of cachexia always indicates a poor prognosis, having a marked impact on the patients’ quality of life and survival (1). Several important molecular mechanisms have been shown to be involved in the increased muscle catabolism observed in cancer-induced cachexia, such as greater ubiquitin-proteasome-dependent proteolysis, apoptosis, and activation of uncoupling proteins (2–5). Interaction of these mechanisms leads to muscle-mass loss by promoting protein and DNA breakdown and energy inefficiency.

Myostatin, also known as growth and differentiation factor-8 (GDF factor-8), which was cloned in 1997, is a member of the transforming growth factor-β (TGF-β) superfamily of secreted growth factors. It is a negative regulator of skeletal muscle development (6–8). During the embryogenetic process, myostatin expression is only observed in developing skeletal muscles, but the protein continues to be expressed and secreted by skeletal muscles during adult life (9,10). Mice and cattle with genetic deficiencies in myostatin exhibit marked increases in skeletal muscle mass, thus supporting the role of myostatin in supressing muscle growth (11). Myostatin acts systemically (it is produced in muscle and adipose tissue and released in the circulation) and binds to cell-surface receptors, causing muscle loss. The myostatin protein can be detected in the circulation as a full-length precursor that is cleaved into an amino-terminal pro-peptide and a carboxy-terminal mature region, which is the active form of the peptide. In skeletal muscle and circulation, myostatin is detected in inactive complexes of differing composition with other proteins, including its own pro-peptide, follistatin-like 3 (Fstl3, also known as follistatin-related gene), and latent TGFβ binding protein (12–15). The mechanism of activation of these inactive complexes (or whether they can be activated at all) is unknown. For complexes containing the pro-peptide, activation likely requires proteolysis of the pro-peptide, possibly by specific target cells (16,17). Once activated, myostatin has a high affinity for the activin IIB receptor (Acvr2b, also known as ActRIIB) and a weak affinity for Acvr2a (also known as ActRII and ActRIIA), both of which, as with other receptors for TGF-β family members, bind multiple ligands (18).

Skeletal muscle possesses the ability to respond and adapt to changing environmental stimuli, leading to a set of metabolic and morphological adaptations, which allow it to better meet the energy demands of sustained physical activity. Active myostatin binds to its receptor ActRIIB with high affinity and regulates the expression of target genes through a TGF-β signaling pathway (10). Myostatin signaling acts through this receptor on skeletal muscle by activating an intracellular cascade of events. First, there is presumed recruitment of a type I co-receptor. Thus, activin receptor-like kinases 4 and/or 5 (ALK-4, ALK-5) are candidate coreceptors that are phosphorylated by ActRIIB. This activates phosphorylation of TGF-α-specific Smads 2 and 3, which form a complex with Smad 4. The Smad 2/3/4 complex is translocated to the nucleus to regulate the expression of targeted genes such as MyoD and other myogenic regulatory factors (19). Myostatin also activates the p38 MAPK, Erk1/2 and Wnt pathways (10,19–22). Inhibition of myostatin by injection of neutralizing antibodies or antagonists causes an increase in skeletal muscle mass, thus myostatin inhibitors exhibit great potential as candidates for treatment of muscle-wasting diseases (15,23). Conversely, the ectopic expression of myostatin induces atrophy in adult skeletal muscle by decreasing muscle structural genes such as those of myofibrillar proteins (myosin heavy-chain IIb, troponin I and desmin) and myogenic transcription factors (MyoD and myogenin) (24). Myostatin induces muscle wasting by activating the ubiquitin proteolytic system. The ubiquitin-associated genes atrogin-1, MuRF-1 and E214k are upregulated following myostatin treatment (25). Of note, myostatin signaling is able to inhibit Akt phosphorylation, thus downregulating the IGF-1/PI3K/AKT hypertrophy pathway. In addition, myostatin increases the levels of the active form of the transcription factor FoxO1, allowing for increased expression of atrophy-related genes (atrogenes). Notably, myostatin does not exert its action through NF-κB (25).

β2-adrenergic agonists are potent muscle growth promoters in many animal species (26,27), resulting in skeletal muscle hypertrophy (28–31). Formoterol is one of these compounds with important anti-cachectic effects in animal models. The model of action of this drug is based on its ability to prevent muscle-wasting by inhibiting proteolysis in skeletal muscle. Thus, this β2-agonist decreases the activation of the ubiquitin-dependent proteolytic system, the main mechanism activated in muscle-wasting conditions (32). In addition to its anti-proteolytic effects, formoterol decreases muscle apoptosis in muscle-wasting animals (32).

Bearing the above in mind, the aim of the present study was, in addition to observing the myostatin gene expression in a catabolic condition characterised by profound muscle-wasting implantation of the Yoshida AH-130 ascites hepatoma, to test the hypothesis that certain anabolic actions of formoterol on skeletal muscle (32) involve the myostatin system.

Male Wistar rats (Interfauna, Barcelona, Spain) of 5 weeks of age were used in the experiments. The animals were maintained at 22±2°C with a regular light-dark cycle (light on from 08:00 a.m. to 08:00 p.m.) and had free access to food and water. The food intake was measured daily. All animal manipulations were performed in accordance with the European Community guidelines for the use of laboratory animals.

Rats were divided into control and tumour host groups. The latter group received an intraperitoneal inoculum of 108 AH-130 Yoshida ascites hepatoma cells obtained from exponential tumours (33). The two groups were further divided into treated and untreated sub-groups, the former being administered a daily subcutaneous dose of formoterol [0.3 mg/kg body weight (bw), dissolved in physiological solution], and the latter the corresponding volume of solvent. On day 7 after tumour transplantation, the animals were weighed and anaesthetised with an intra-peritoneal injection of ketamine/xylazine mixture (3:1) (Imalgene® and Rompun®, respectively). The tumour was harvested from the peritoneal cavity and its volume and cellularity were evaluated. Tissues were rapidly excised, weighed, and frozen in liquid nitrogen.

Total RNA from the gastrocnemius muscle was extracted by TriPure™ kit (Roche, Barcelona, Spain), a commercial modification of the acid guanidinium isothiocyanate/phenol/chloroform method (34).

Statistical analysis of the data was performed by means of the Student’s t-test.

Fig. 1 shows the implantation of the Yoshida AH-130 ascites hepatoma caused significant decreases in the weight of the gastrocnemius (13%), EDL (18%) and tibialis (12%) muscles. Formoterol treatment significantly increased the weight of the above-mentioned muscles (Fig. 1). These data are in agreement with previous results from our own laboratory (32).

Myostatin has been described as a negative regulator of muscle growth and its development, and is involved in several forms of muscle wasting, including the severe cachexia observed as a result of diseases such as AIDS and cancer (35,36). McFarlane et al have demonstrated that myostatin induces cachexia through a NF-κB-independent mechanism by antagonizing hypertrophy signaling through the regulation of the AKT-FOXO1 pathway (25). As with other TGF-β superfamily members, myostatin interacts with a serine/threonine transmembrane receptor known as activin IIB (ActIIB) (22,37,38). Binding of the ligand to ActRII leads to phosphorylation and activation of the activin type I receptor, which in turn initiates intracellular signaling mediated by SMAD proteins (22,37,38). Although the levels of gene expression for myostatin were not affected by tumour burden (Table I), the cachectic animals presented a significant increase (113%) in the gastrocnemius muscle mRNA levels of the myostatin receptor (ActIIB). This increase indicates that muscle wasting in this experimental tumour model involved the myostatin system. Notably, the expression of the different isoforms of follistatin [FLST288 and FLST315 (39,40)], a protein with the opposite effects to those of myostatin, were significantly reduced as a result of the implantation of the tumour (46 and 58% for FLST288 and FLST315, respectively, Table I). This observation further supports a role for the myostatin system in muscle wasting in the Yoshida AH-130 ascites hepatoma model.

Follistatin is a secreted protein capable of binding and neutralising the actions of any member of the TGF-β family of proteins such as myostatin. In addition to our finding that follistatin is decreased in tumour-bearing animals, two independent approaches provide clear evidence that downregulation of this gene contributes to the atrophic phenotype in cachectic muscles. One approach is based on the observation that follistatin is required to increase the muscle capillary density and improve endothelial cell function in ischemic mice and that its expression is associated with AKT1 signaling (41). This result indicates that follistatin downregulation in cachectic muscles leads to a decrease in AKT1 expression resulting in a decreased protein synthesis (41). The other approach, using transgenic mice and C2C12 cells overexpressing follistatin, demonstrated that follistatin over-expression in mouse skeletal muscle promotes hypertrophy and an oxidative fibre-type switch, leading to increased whole-body strength and fatigue resistance; follistatin overexpression enhances myoblast fusion, resulting in hypertrophic myotubes in C2C12 cells, acting via regulation of the CnA-NFAT pathway (42). Our results are in agreement with those of Costelli et al who observed similar changes in both myostatin and follistatin mRNA levels in gastrocnemius muscles of tumour-bearing rats at day 4 of tumour growth (36). However, at later stages of tumour growth (day 7, as used in the present study) the same authors observed increased myostatin and follistatin mRNA levels. The reasons for this discrepancy are not known.

No changes in myostatin, myostatin receptor or follistatin mRNA were observed in the heart of the tumour-bearing animals (Table I). This indicates that the myostatin system does not appear to be responsible for cardiac muscle wasting. Similar observations have been made in patients with chronic heart failure (43).

When the animals were treated with formoterol, a β-agonist with anti-cachectic potential (32), in addition to an anabolic action of skeletal muscle that was clearly reflected on increases in muscle weights [gastrocnemius (13%), tibialis (10%) and EDL (12%) (Fig. 1)], the β-agonist significantly decreased ubiquitin gene expression (Table I). This is a clear marker of protein degradation, a process that has extensively been described during muscle wasting (44–49). Formoterol treatment significantly increased the two follistatin isoforms (94% for FLST288 and 201% for FLST315) as well as the FLSTL3 (69%), termed FLST-like 3. FLSTL3 is a protein that has recently been discovered to share significant structural and functional homology with follistatin (50). Moreover, treatment significantly decreased the levels of expression of the myostatin receptor (50%) (Table I). In addition, formoterol treatment resulted in a significant decrease in the myostatin protein content [both active (32%) and inactive myostatin (46%)] of gastrocnemius muscle (Table I). It is clear that the antiwasting effects of formoterol involve the myostatin system.

In conclusion, the results presented indicate that certain anabolic actions of formoterol on the skeletal muscle of cachectic animals may be mediated via the myostatin system. This treatment modality should therefore be regarded as a potential therapeutic target in cancer cachexia.

This study was supported by a grant from the Ministerio de Ciencia y Tecnología (SAF-02284-2008). The authors would like to thank Industriale Chimica s.r.l. (Saronno, Italy), who kindly provided micronised formoterol fumarate. 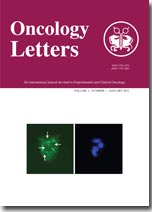