In our previous study, we reported that the cannabinoid receptors CB1 and CB2 are overexpressed in human hepatocellular carcinoma (HCC) tissues. Recently, the antitumor potential of the endogenous cannabinoid anandamide (AEA) has also been addressed. The present study was conducted to investigate the anti-proliferative effects of AEA in HCC cells. The human HCC cell line Huh7 was used. Cell proliferation was measured by MTT assay and flow cytometry. Apoptotic analysis was investigated by TUNEL assay. Real‑time PCR and western blot analysis were used to analyze the expression of relevant molecules. The results of this study demonstrated that AEA inhibited the proliferation of Huh7 cells, resulted in G1 cell cycle arrest and induced apoptosis. Furthermore, downregulation of CDK4 and upregulation of p21 and Bak by AEA were observed. This study defines the anti-proliferative effects of anandamide in HCC cells and suggests that AEA has therapeutic potential in the management of HCC patients.

Hepatocellular carcinoma (HCC) is the fifth most common type of cancer worldwide, with 626,000 new cases reported in 2002 (1). Hepatitis B and C virus infection accounts for the main cause in the majority of cases. Chronic excessive alcohol consumption, environmental toxins, aflatoxin B and nonalcoholic steatohepatitis (NASH) are other common causes. The etiological factors also vary by geographical location. The survival rate of HCC patients has been increased due to surgical resection or transplantation, chemoembolization and a combination of chemotherapy (2,3). Further insight into the mechanism of hepatocarcinogenesis may offer novel modalities to improve the outcome of HCC patients.

Arachidonoy lethanolamide (AEA), also called anandamide, was the first identified endogenous agonist for cannabinoid receptors (CB1 and CB2), and shares many of the pharmacological effects of the psychotropic marijuana component Δ9-tetrahydrocannabinol (Δ9-THC). Related acylethanolamines (AEs), including dihomo-γ-linolenoyl ethanolamide, 7,10,13,16-docosatetraenoyl ethanolamide and mead ethanolamide have also been identified as endogenous agonists for cannabinoid receptors (4–6). The endogenous cannabinoid system, comprising the cannabinoid receptors CB1 and CB2 as well as enzymes regulating endocannabinoid biosynthesis and degradation, controls several physiological and pathological conditions. Recent evidence indicates that endocannabinoids influence the intracellular events controlling the proliferation and apoptosis of a number of cancer cell types, including breast cancer, prostate cancer, C6 glioma cells, colorectal cancer, gastric cancer and cholangiocarcinoma, thereby leading to antitumor effects both in vitro and in vivo (7–13). Therefore, the endocannabinoid system has been recommended as a target for the development of new drugs for cancer therapy (14).

We have previously reported that the overexpression of CB1 and CB2 receptors is correlated with dedifferentiation and thrombus of the portal vein (15). In the present study we investigated the inhibitory effects of AEA on the proliferation of HCC cells. Our data demonstrates that AEA induces cell cycle arrest and apoptosis, and may provide a novel therapeutic strategy in the treatment of human HCC.

The human hepatocellular carcinoma cell line, Huh7, was maintained in Dulbecco’s modified Eagle’s medium (DMEM; Gibco BRL Life Technologies, MD, USA) and supplemented with 1.0 mM pyruvic acid. The media were also supplemented with 2 mM l-glutamine, 10% inactivated fetal bovine serum and antibiotic antimycotic solution (100 U/ml penicillin, 100 μg/ml streptomycin and 250 ng/ml amphotericin B; Sigma Aldrich). The cells were maintained in a humidified environment containing 5% CO2 and held at a constant temperature of 37°C. For the experiments, the cells were seeded at 60–70% confluence, unless otherwise indicated, and allowed to adhere overnight. The cells were then kept in serum-free medium for at least 6 h prior to treatment. Control cells were cultured in the presence of vehicle alone.

Cell viability of Huh7 was determined by the 3-[4,5-dimethylthiazolyl-2] 2,5-diphenyl-tetrazolium bromide (MTT; Sigma Chemical Co.) assay as previously reported (16). Following treatment in 96-well plates (triplicate wells for each sample), MTT stock solution was added to each well (final concentration of 1 mg/ml) for 4 h. The medium was then removed and 150 μl lysis buffer (DMSO) was added to dissolve the formazan crystals. Finally, the absorbance at 570 nm (test wavelength) and 630 nm (reference wavelength) was measured using an ELISA microplate reader (Dynex Technologies). The cells were treated with different doses of AEA at fixed molar ratios for 24 h. Relative survival was assessed, and the IC50 was established.

Cell cycle analysis was performed on Huh7 cells plated in 6-well plates, initially seeded at a density of 50×103, 100×103 or 150×103 cells/well, and incubated for 24, 48 or 72 h, respectively, with vehicle or AEA at 0.11 μM. When specified, the cells were synchronized with 30 ng/ml nocodazole for 14 h prior to the addition of the tested compounds. Following treatment, the cells were harvested by trypsinization, washed with phosphate-buffered saline (PBS), pelleted and fixed by rapid submersion in ice-cold 80% ethanol with vigorous vortexing. After overnight fixation at -20°C, the cells were washed with PBS, pelleted, resuspended and incubated for 20 min in a saponin-based permeabilization solution containing 1% BSA, 0.2 mg/ml ribonuclease A and 20 μg/ml propidium iodide. Data were collected on a FACSCalibur flow cytometer (BD Biosciences) and then analysis was performed using ModFit LT v3.0 from Verity Software House, Inc. (Topsham, ME, USA). A total of 10,000 events were collected and corrected for debris and aggregate populations.

Terminal deoxynucleotidyl transferase-mediated dUTP nick-end labeling (TUNEL) was employed to detect DNA fragmentation of cells using an in situ cell death detection kit POD (Roche Applied Science, Mannheim, Germany) in accordance with the manufacturer’s instructions (17). Briefly, the cells were seeded in a 6-well plate for 24 h and then treated with vehicle or AEA at 0.11 μM. After treatment, the cells were fixed with 4% paraformaldehyde for 15 min at room temperature, and permeabilized with 0.1% Triton X-100 for 2 min (on ice). Endogenous peroxidase activity was quenched with 3% H2O2 for 10 min. After rinsing with PBS, the cells were exposed for 60 min at 37°C in a humid atmosphere to the TUNEL reaction mixture containing 0.135 U/ml calf thymus terminal deoxynucleotidyl transferase (TdT), 0.0044 nmol/ml digoxigenin-11-2′-deoxy-uridine-5′-triphosphate (DIG-dUTP), and 1 mM cobalt chloride in 1X reaction buffer in distilled water. After washing with PBS, the cells were treated for 30 min at room temperature with streptavidin-horseradish peroxidase, followed by washing and 0.05% 3-3′-diaminobenzidine tetrahydrochloride (DAB) color reaction. Counterstaining was performed with Harris’s hematoxylin and the morphologic features were visualized by light microscopy. Routine H&E staining was also conducted. A negative control was obtained by omitting TdT. As a positive control, the cells were incubated with 1,000 U/ml DNase I recombinant (Fermentas) prior to the labeling procedures (18).

After treatment with the compounds, protein extracts were prepared by washing the cells in PBS and incubating for 20 min in ice-cold lysis buffer supplemented with protease inhibitor cocktail as reported previously (19). After performing sonication three times for 10 sec and evaluating the protein concentration, equal amounts of protein were electrophoresed and then electrotransferred to a nitrocellulose membrane, which was developed using the alkaline phosphatase colorimetric system. The correct protein loading was verified by means of red Ponceau staining and immunoblotting for GAPDH. All of the antibodies used were purchased from Santa Cruz Biotechnology, Inc.

Cell viability data were expressed as the mean ± SE and evaluated using the Student’s t-test. P<0.05 was considered to indicate a statistically significant result.

Cell growth and the cell cycle

AEA significantly inhibited the growth of Huh7 cells. Statistical significance between cultures treated with AEA versus vehicle is shown in Fig. 1. We then performed flow cytometry analysis at 12, 24, 48 and 72 h after treatment. In the Huh7 cells tested, treatment with AEA for 24 h increased the G0-G1 phase fraction and decreased the S phase fraction when compared to the vehicle-treated cultures. Repeat experiments of cell growth and cell cycle analysis produced similar results. Representative results are shown in Fig. 2, with the following fraction values for cultures treated with AEA versus vehicle, respectively: G0-G1 phase, 64.98 and 57.81%; S phase, 26.13 and 21.04%; G2-M phase, 8.89 and 21.15% (Fig. 2).

Induction of apoptosis by AEA

The pharmacological effects of endocannabinoids in cancer cells have been increasingly reported. In our earlier study of cannabinoid receptor expression in human HCC tissue samples, we found that high expression of CB1 and CB2 was associated with portal vein invasion and dedifferentiated histology, which highlighted the role of cannabinoids in human hepatocarcinogenesis (15). The aim of this study was to investigate the effect of AEA on suppression of growth in HCC cells. The data presented in this study demonstrate the anti-proliferative effect induced by AEA in HCC cells.

The first endogenous ligand of the cannabinoid receptor to be identified was anandamide (AEA), which was isolated in 1992. AEA is an arachidonic acid derivative which appears to act on the central nervous system as a neuromodulator or retrograde messenger inhibiting the release of classical neurotransmitters (5,20). The antitumor effect of cannabinoids was first reported in 1975 when Δ9-THC, Δ8-THC and cannabinol were found to inhibit the growth of Lewis lung adenocarcinoma cells in vitro and in vivo, following oral administration in mice (21). Similar antitumor effects have recently been reported in a variety of cancers including breast cancer, prostate cancer, C6 glioma cells, colorectal cancer, gastric cancer and cholangiocarcinoma (7–13). In HCC, Δ(9)-tetrahydrocannabinol (Δ(9)-THC), the main active component of Cannabis sativa and JWH-015 (a cannabinoid receptor 2 (CB2)-selective agonist) were suggested to demonstrate inhibitory effects on growth both in vitro and in vivo (22). Concordant with these findings, the data in the present study demonstrate that the endogenous cannabinoid AEA reduced the viability of HCC cells.

Cell cycle checkpoints control the proper timing of cell cycle events by enforcing the dependency of late events on the completion of early events. Consequently, checkpoint blocking may result in cell cycle arrest and significantly alter cell proliferation activity (23). We then investigated the action mechanism of AEA as it was effective in reducing cell viability. Treatment with AEA slowed the Huh7 cell cycle progression and reduced transition through the G1-S checkpoint, causing an accumulation of cells in the G1 phase. The concordant effects were observed in hepatoma HepG2 cells, epidermal growth factor-stimulated PC3 prostate cancer cells, the breast cancer cell line EFM-19, and gastric cancer cells (7,11,24,25). From the data of the present study, it was suggested that AEA inhibited the proliferation of Huh7 cells through cell cycle arrest in the G1-S phase. The molecules involved in cyclin-CDK complexes, including the cyclin-dependent kinase (CDK) and cyclin kinase inhibitor (CKI) families, are modulated in the G0-G1 phase of the cell cycle in human hepatocarcinogenesis (26,27). Hence, we further screened the dysregulation natures of these relevant molecules. Huh7 cells treated with AEA demonstrated upregulation of p21 and downregulation of CDK4 at the mRNA and protein levels. In human prostate carcinoma cells, the endocannabinoid 2-arachidonylglyceryl ether (noladin ether, NE) induced cell cycle arrest in the G0-G1 phase in PC3 cells, and downregulated the expression of cyclin D1 and cyclin E in PC3 cells (28). In human breast cancer cell lines, AEA led to cell cycle arrest and inhibited the expression of CDK2 (29). Our findings further supported the hypothesis that AEA arrests the cell cycle in the G1-S phase via the upregulation of p21 and downregulation of CDK4 in HCC cells.

In addition, this study observed the effects of AEA on apoptosis in Huh7 cells. AEA was found to induce apoptosis in Huh7 cells compared with vehicle. In HepG2 cells, AEA or the synthetic cannabinoid WIN induced hepatocyte apoptosis through the activation of proapoptotic signaling pathways (i.e., p38 MAPK and JNK) and inhibition of antiapoptotic signaling pathways (i.e., PKB/Akt), or via transcription factor PPARgamma (25,30). Furthermore, our data demonstrated that AEA upregulated Bak, which is a well-known cell death initiator in the apoptotic signaling cascade (31,32). The role of Bak in hepatocarcinogenesis or for HCC treatment has also been documented. The level of Bak is reduced or even non-detectable in HCC cells (33–35). The pro-apoptotic role of Bak in HCC cells is further supported by studies in which different agents induced apoptosis in HCC cells by stimulating Bak expression (36,37). In accordance with these findings, our results demonstrated that AEA induced apoptosis via the upregulation of Bak in Huh7 cells.

This study was funded by the National Natural Science Foundation of China (grant no. 30750005). 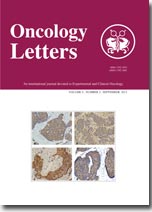