In the present study, to identify the effective components of Chinese traditional herbs, Euphorbia hylonoma Hand.‑Mazz. (Euphorbiaceae), a folk herb that has been used among the Qinling mountain area for hundreds of years, was investigated. 3,3'‑Di‑O‑methyl ellagic acid‑4'‑O‑β‑d‑xylopyranoside (JNE2), an ellagic acid derivative, was isolated from the acetone extract of the herb and its antitumor activity against human hepatoma HepG2 cells was detected in vitro. The results showed that JNE2 inhibited the proliferation of HepG2 cells in a dose‑ and time‑dependent manner and blocked the cell cycle at the G1/S phase. A high dosage of JNE2 induced apoptosis of the tumor cells, but no significant differences were identified between the treatment groups. The invasiveness of HepG2 cells was also inhibited by JNE2. The mechanism of the antitumor effect of JNE2 at the molecular level was presumed to be due to the upregulation of the protein expression of Bax and caspase‑3, and the downregulation of the protein expression of Bcl‑2 and CCND1. The results suggested that JNE2 is a potential antitumor agent that merits further investigation.

Euphorbia hylonoma Hand.-Mazz. (Euphorbiaceae), commonly known as Jiu Niuzao, has long been used as a folk medicine in China. It grows wildly in the Northwestern region of China and is used in antineoplastic intervention, as well as in the treatment of hepatocirrhosis, edema and incontinence (1). The bioactive and chemical constituents from the Euphorbia genus have been widely studied (2–7). It has been previously reported that several Euphorbia species are used in the treatment of skin diseases, gonorrhea, migraines (8) and cancerous conditions (9–11). Previous studies have reported the isolation of the chemical constituents from this plant, including tannins, ferulic acid esters and sesquiterpenoids (12,13). There have also been studies on the pharmacognosy of this plant (14,15).

However, studies concerning the antitumor components from this plant and their mechanisms of action are rare. In the current study, 3,3′-di-O-methyl ellagic acid-4′-O-β-d-xylopyranoside(JNE2), an ellagic acid derivative, was isolated from Euphorbiaceae during the anticancer screening study of traditional Chinese medicine (TCM). After analyzing its chemical features and comparing the spectral data with those of previous studies (16,17), this compound was identified as JNE2. The present study investigated the cytotoxic activity and the antitumor mechanisms of JNE2. Cell cycle, apoptosis and western blot analyses and cell invasion assay were employed, and the HepG2 human hepatoma cell line was adopted as the cell model.

The roots of Euphorbia hylonoma were collected from Qinling Mountain, Shaanxi, China, in September 2010 and were identified by Professor Juxian Lu, Faculty of Pharmacy, Medical College of Xi’an Jiaotong University (Xi’an, China). The voucher specimen was retained at the Department of Pharmacy, Medical School of Xi’an Jiaotong University for future reference.

The HepG2 human hepatoma cell line was obtained from the Shanghai Institute of Biochemistry and Cell Biology, Chinese Academy of Sciences (Shanghai, China). HepG2 cells (5.0×104 cells/ml) were cultured in RPMI-1640 supplemented with 10% fetal bovine serum (FBS), containing 2.0 mmol/l glutamine and 1% penicillin-streptomycin in 5% CO2 at 37°C, and were allowed to adhere for 24 h. The experiments were divided into the following five groups in the cell proliferation assay (MTT assay): Negative control (dimethyl sulfoxide; DMSO); positive control (15 μmol/l oxaliplatin); low-dosage (22.5 μmol/l JNE2); middle-dosage (45 μmol/l JNE2); and high-dosage (90 μmol/l JNE2). However, the low-dosage group was cut-off in other assays due to its low efficiency in the MTT assay.

HepG2 cells (2×104 cells/well) were seeded in 96-well plates. Following overnight incubation, test substances were added and the incubation was continued at 37°C in an atmosphere containing 5% CO2 for 3 days. Subsequently, 20 μl MTT (Sigma-Aldrich, St. Louis, MO, USA) solution (5 g/l) was added into each well and incubated for an additional 4 h. Supernatants were removed and formazan crystals were dissolved in 200 μl DMSO. The optical density was measured at 490 nm using a POLARstar Optima (BMG Labtech GmbH, Ortenberg, Germany).

Cell seeding and treatment were the same as MTT assay. After three days of treatment, cells were harvested by trypsinization and 1×106 cells were counted and used for the analysis. Cells were fixed in ice-cold ethanol overnight at 4°C following washing with PBS. The cells were then washed in PBS again and incubated in 1 ml staining solution (20 μg/ml propidium iodide and 10 U/ml RNase A) for 30 min at room temperature. The cells were examined by fluorescence-activated cell sorting (FACS) using a flow cytometer (FACSort; Becton-Dickinson, Franklin Lakes, NJ, USA), and the cell cycle populations were determined using ModFit software (Verity Software House, Turramurra, Australia).

Cell invasion was evaluated using the Chemicon QCM™ 24-well collagen-based cell invasion assay (Millipore, Billerica, MA, USA) according to the manufacturer’s instructions. In brief, 0.3 ml serum-free medium was added to the interior of each insert to rehydrate the collagen layer for 30 min at room temperature. The medium was then replaced with 0.3 ml prepared serum-free cell suspension containing 3.0×105 cells and the corresponding test substances. Medium (500 μl) containing 10% FBS was added to the lower chamber and the cells were incubated for 24 h at 37°C. Following this, all non-invaded cells were removed from the interior of the insert and the invaded cells were stained with crystal violet. The stained cells were analyzed on an Olympus fluorescence microscope (BX43; Olympus Corporation, Tokyo, Japan).

To evaluate the antitumor role of JNE2 on human hepatoma cells, MTT and colony formation assays were employed to detect the growth of HepG2 cells at various time points following treatment with JNE2 at various concentrations. The results showed that JNE2 exhibited a growth inhibitory effect on HepG2 cells in a dose- and time-dependent manner. Following 24 h of treatment, the OD value of the high-dosage group (JNE2, 90 μmol/l) was significantly lower than that of the negative control group (P<0.05) and also lower than that of the positive control group, but without significant difference (Fig. 2A). The time-effect curve also demonstrated the antiproliferation ability of JNE2 (Fig. 2B). Furthermore, the colony formation results shown in Fig. 3 confirmed that a high dosage of JNE2 may inhibit the growth of HepG2 cells. These results suggested that JNE2 exhibits an inhibitory effect on the proliferation of hepatoma cells.

To explore the mechanism underlying JNE2-suppressed cell proliferation, the impact of JNE2 on cell cycle progression was investigated by FACS and the results are presented in Fig. 4A. Following treatment with high and middle dosages of JNE2, the cell cycle shifted from a high S phase population to a high G1 phase population, together with an accumulation of a G2/M phase population. Whereas, little effect on the cell cycle was observed in the control groups. These results indicated that JNE2 blocks the G1/S transition.

Cancer invasion is the process by which cells break away from the primary tumor and migrate through the surrounding tissue. This enables the cancer cells to move into blood vessels and travel through the body, possibly establishing a secondary tumor at an additional site (18). To determine whether JNE2 inhibits invasion, HepG2 cells were treated with various concentrations of JNE2 and the control groups were treated separately. Evidently, the invasion was inhibited by a high concentration of JNE2, whereas, migration was not altered in the cells that were treated with the negative control (Fig. 5). These results markedly suggest that JNE2 inhibits the invasion of HepG2 cells.

To clarify the apoptotic mechanism of JNE2 on HepG2 cells, western blot analysis was performed to examine the protein expression levels of Bcl-2, Bax, caspase-3 and CCND1 (cyclin D1). The cells that were treated with JNE2 exhibited upregulated levels of Bax and caspase-3 expression when compared with the negative control cells. This result may explain why JNE2 inhibited the growth of HepG2 cells, and this function may be associated with mitochondrial pathway-induced apoptosis. Conversely, the protein levels of Bcl-2 and CCND1 were decreased with JNE2 treatment (Fig. 6). The apoptotic effect of JNE2 was confirmed by the upregulation of Bax and downregulation of Bcl-2. Based on the G0/G1 arresting capability, the downregulation of CCND1 may provide an explanation. These results suggested that JNE2 may exhibit its apoptotic effect through the upregulation of Bax and caspase-3, and the downregulation of Bcl-2 and CCND1.

Ellagic acid, a type of polyphenol compound that widely exists in herbs and numerous types of fruits and nuts, has recently gained increasing attention, although it was once considered useless in TCM. It has been well established that ellagic acid exhibits anticancer (19), antimutagen (20–22) and antimicrobial functions (23), as well as others. Numerous studies concerning the antimutagen and anticancer effects of ellagic acid were performed in the 1970s (24–27). In previous in vitro and in vivo experiments, ellagic acid has shown significant abilities in inhibiting the growth of a number of types of tumor, such as skin, esophagus and lung, as well as other tumors that are caused by carcinogens (28–32). Its anticancer activities are partially based on the quenching of reactive oxygen species, thereby protecting critical cellular targets (i.e. DNA, proteins and lipids) from oxidative insult (33–35). Ellagic acid may also interfere with intracellular signaling pathways, such as those that regulate proliferation, induce apoptosis and respond to oxidative stress (36–39). In the present study, JNE2, an ellagic acid derivative that was isolated from a traditional Chinese herb, Euphorbia hylonoma Hand.-Mazz. (Euphorbiaceae), showed significant antitumor effects on the HepG2 human hepatocellular carcinoma cell line. The antitumor mechanisms of JNE2 were also investigated.

The results of the current study showed that JNE2 may inhibit the proliferation of HepG2 cells. Specifically, JNE2 affected the cell cycle by arresting the cells in the G0/G1 phase, thus, inducing apoptosis. Cancer cell invasion was also inhibited by JNE2, particularly at a high concentration (90 μmol/l). Overall, these results demonstrated the outstanding antitumor ability of JNE2. The regulatory effects of JNE2 upon apoptosis-related protein targets, including Bcl-2, Bax, caspase-3 and CCND1, were measured to determine its antitumor mechanism at the molecular level.

Bcl-2 family proteins that comprise proapoptotic proteins (such as Bax, Bad and Bid) and antiapoptotic proteins (such as Bcl-2 and Bcl-xL) tightly regulate the mitochondrial apoptosis pathway. A number of anticancer drugs trigger mitochondria-mediated apoptosis in cancer cells through the downregulation of Bcl-2/Bcl-xL or the upregulation of Bax/Bad/Bid. Bcl-2 is an antiapoptosis gene (40–44) and is closely associated with cellular apoptosis (45,46), as well as with the mitochondrion (47,48). Bax induces cellular apoptosis and the ratio of Bcl-2/Bax is the determining factor of antiapoptosis for cells (49). The results of the present study showed that JNE2 treatment significantly upregulated the expression of Bax protein and downregulated that of Bcl-2. This suggested that JNE2 acts on the Bcl-2/Bax genes to exert its apoptotic effect.

Caspases, a family of cysteine acid proteases, act as important mediators of apoptosis. They are induced by various stimuli and contribute to the overall apoptotic phenotype by cleaving various cellular substrates (50–52). Caspase-3, a key regulatory protease upon which a number of signaling pathways merge for the execution of apoptosis, is involved in apoptosis induced by Bcl-2/Bax, p38 and JAK-STAT (53,54). In the current study, the protein expression of caspase-3 was detected in HepG2 cells following treatment with JNE2 and the upregulated effect was identified. These results suggested that JNE2 induced the apoptosis of human hepatoma HepG2 cells via the mitochondrial pathway.

CCND1 is a cell cycle control protein that mainly affects G1 progression and G1/S transition. It forms complexes with CDK4 and CDK6, and additionally with RB1. The phosphorylation of RB1 by CCND1/CDK4 prevents cell cycle arrest at the G1/S start point. The overexpression of CCND1 causes oncogenesis due to its stimulation of the expression of Bcl-1, which accelerates cell transition through the G1 phase. Therefore, JNE2 shows the ability to block the G1/S phase transition by downregulating the expression of CCND1.

However, among the downregulated and upregulated expression ratios of Bcl-2/Bax, caspase-3 and CCND1, the predominant mechanism by which JNE2 induces mitochondria-mediated apoptosis in HepG2 cells is uncertain and other regulatory mechanisms, including at the receptor level, require further investigation. 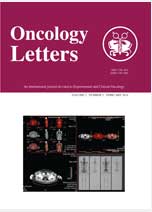