We have investigated the efficacy and mechanisms of antineoplaston AS2-1 against post-operative lung metastasis following removal of implanted human colon cancer in nude rat. The influence of AS2-1 on in vitro KM12SM human colon carcinoma cell activities (growth, cell cycle, and apoptosis) was evaluated. AS2-1 was administered perorally after removal of the implanted KM12SM cecal cancer in nude rat. AS2-1 inhibited KM12SM cell proliferation through G1 cell arrest and, at a higher concentration, induction of apoptosis. AS2-1 showed significant reduction in lung metastasis at 5 weeks after cecal removal. The survival rate in the AS2-1 group was significantly higher than that in the control. TUNEL staining on the lung metastatic tumors revealed that the apoptosis index (AI) in the AS2-1 group was significantly higher. Antineoplaston AS2-1 showed an antimetastatic effect against post-operative lung metastases from colon cancer through G1 cell arrest and the subsequent induction of apoptosis. 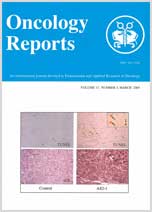