The frequency of gastric cancer in patients with renal cell carcinoma (RCC) is exceptionally high in our region suggesting a common molecular basis. Our study aimed to characterize tumors and to analyze possible underlying molecular features in 12 patients with gastric cancer and concomitant RCC. We performed an immunohistochemical analysis including p53 protein expression, proliferative activity (MIB-1), mismatch repair status (hMLH1, hMSH2, hMSH6, PMS2) and E-cadherin expression in gastric cancers, which were additionally analyzed for Epstein-Barr-Encoded-RNA (EBER) by in situ hybridization. Microsatellite instability was analyzed with a PCR multiplex system and capillary electrophoresis. KRAS mutations in codons 12 and 13 were tested by pyrosequencing. All patients had clear cell RCCs, 10 of which were well differentiated and diagnosed in an early stage, while the gastric cancers of these patients were generally poorly or undifferentiated and diagnosed in an advanced stage. Gastric cancers showed reduced E‑cadherin staining in 10 out of 12 cases. Two gastric cancers demonstrated loss of hMLH1 and PMS2, which was confirmed by molecular analysis showing a high degree of microsatellite instability. All RCCs were microsatellite stable. KRAS mutation was detected in one of the two instable gastric cancers, while none of the RCCs had KRAS mutations. Another gastric cancer was positive for EBV. In conclusion, a coherent cause for gastric cancer and concomitant RCC, such as Lynch syndrome, a prominent role of KRAS mutation or EBV infection, was not found in our series. Other factors leading to a higher susceptibility for cancer must be explored to explain why individuals with RCC have a higher risk of developing gastric cancer in our region. 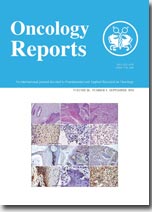