The major obstacle to tumor chemotherapy is drug resistance. In the present study, we investigated the characteristics of FaDu cells (a hypopharyngeal carcinoma cell line) with multidrug resistance (MDR) induced by Taxol. The resistant cell line, FaDu/T, was grown by exposing normal FaDu cells to escalating concentrations of Taxol stepwise for over 12 months. The multidrug resistant sensitivities of the FaDu/T cells to cisplatin (DDP), 5-fluorouracil (5-FU), doxorubicin (Dox) and vincristine (VCR) were investigated by methyl-thiazolyl-tetrazolium (MTT) assay. Cell apoptosis was measured by acridine orange and Hoechst 33342/propidium iodide double staining. Cell cycle distribution and the cell apoptosis index were quantified using flow cytometry. Reverse transcription-polymerase chain reaction (RT-PCR) was conducted to determine the mRNA levels of the MDR-related genes MDR1/ABCB1 and BCRP/ABCG2. Western blotting was used to assay the expression of MDR1/ABCB1 and BCRP/ABCG2 and the apoptosis-related proteins caspase-3, Bcl-2 and Bax. Compared with the FaDu cells, the drug resistance of FaDu/T cells to DDP, 5-FU, Dox and VCR was increased 8.99-, 21.96-, 31.42- and 10.00-fold, respectively. The percentages of FaDu/T cells in the G0/G1 and G2/M phases were increased while the cell percentage in the S phase decreased as compared with the percentages of FaDu cells. The anti-apoptotic ability increased prominently, as the index of apoptosis decreased. Furthermore, caspase-3, Bcl-2 and Bax expression was altered accordingly to resist apoptosis in the FaDu/T cells. MDR1/ABCB1 expression increased significantly at both the mRNA and protein levels, while BCRP/ABCG2 expression appeared to inversely affected, i.e. decreased, in a concentration-dependent manner. These ­findings may provide theoretical support for the prevention of MDR in clinical cancer chemotherapy. 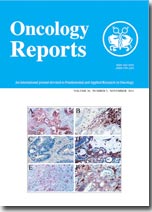