Dendrobium nobile is widely used as an analgesic, an antipyretic, and a tonic to nourish the stomach in traditional medicine. Mounting evidence suggests an antitumor activity of denbinobin, a major phenanthrene isolated from stems of Dendrobium nobile. The present study aimed to investigate the inhibitory effect of denbinobin on the invasive ability of human cancer cells. The cytotoxicity of denbonobin was examined in several human cancer cell lines including SK-Hep-1 hepato­carcinoma cells, SNU-484 gastric cancer cells, and HeLa cervix cancer cells. Because SNU-484 cells showed the lowest IC50 value, we examined the effect of denbinobin on the invasive ability of SNU-484 cells. The present study revealed, for the first time, that denbinobin inhibits the invasive phenotype of SNU-484 human gastric cancer cells in a dose-dependent manner. Expressions of matrix metalloproteinase (MMP)-2 and MMP-9 were significantly decreased by denbinobin, suggesting that MMP-2/-9 may be responsible for the anti-invasive activity of denbinobin. We also provide evidence that denbinobin induces apoptosis through down-regulation of Bcl-2 and an up-regulation of Bax. Taken together, this study demonstrates that denbinobin inhibits invasion and induces apoptosis in highly invasive SNU-484 human gastric cancer cells. Given that gastric cancer has been estimated to be one of the most common causes of cancer-related death among Asians and the major cause of death from gastric cancer is the metastatic spread of the disease, our findings may provide useful information regarding the application of denbinobin as a chemopreventive agent that could prevent or alleviate metastatic gastric cancer. 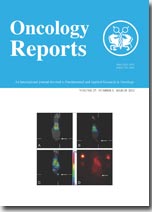