Breast cancer is a serious concern in many countries. Despite public education, cancer prevention and screening, increase in early diagnosis and advances in cancer management, 200,000 women develop breast cancer and more than 40,000 women die of breast cancer in the United States annually (1,2). Since breast cancer is typically a hormone-dependent cancer, targeted endocrine therapy has led to a significant improvement in the outcomes for women with estrogen receptor (ER)-positive breast cancer. However, not all patients respond to first-line endocrine treatment, and other patients will eventually relapse despite an initial response to the treatment (3). Therapeutic options for these patients are limited. Additionally, patients with hormone receptor-negative breast tumors that are not human epidermal growth factor receptor 2 (HER2)-positive [(i.e., triple-negative breast cancer (TNBC)] account for ~15% of breast cancer patients and these TNBC patients have not benefitted from generally well-tolerated, anti-HER2 drugs or targeted endocrine treatment strategies (4–6). Although considerable progress has been achieved through the development of new drugs and treatment strategies, current therapy is unable to elicit a clinical response in these patients (7).

In the last two decades, there have been major efforts to identify the signaling mechanisms responsible for these patients, and new therapeutic targets are being explored against cancer signaling pathways. Cyclooxygenase-2 (COX-2) is overexpressed in approximately 70% of in situ cases and 60% of invasive breast cancer, and elevated COX-2 expression in invasive breast cancer leads to increased tumor recurrence and decreased patient survival (8,9). COX-2-specific inhibitors have been shown to promote growth arrest and induce apoptosis in various cancers, including breast cancer, by down-regulating the prosurvival signaling pathway, protein kinase B (PKB)/Akt (10,11). The Western New York Exposures and Breast Cancer Study results showed a significant reduction in breast cancer risk associated with recent and adult lifetime non-steroidal anti-inflammatory drug use (odd ratio 0.73, 95% confidence interval: 0.51–1.03) (12). Luteolin, 3′, 4′, 5, 7-tetrahydroxyflavone, is a common flavonoid that exists in many types of plants including fruits, vegetables, and medicinal herbs and acts as antioxidants, estrogenic regulators, and antimicrobial agents (13). Studies have been demonstrated that the anticancer property of luteolin is associated with inducing apoptosis, which involves redox regulation, DNA damage, protein kinase inhibition to cancel cell proliferation, and suppression of metastasis and angiogenesis (13,14).

The objective of this study was to examine the effect of combination treatment of celecoxib and luteolin in human breast cancer cells and to subsequently determine the mechanism of action.

Apoptotic MCF-7 and MDA-MB-231 cells were identified using the 5-bromo-2-deoxyuridine/terminal deoxynucleotidyl transferase (TdT)-mediated 2′-deoxyuridine 5′-triphosphate (dUTP)-biotin nick end labeling assay (TUNEL) and Annexin V-fluorescein isothiocyanate (FITC)/propidium iodide (PI) staining. TUNEL assay (Apoptosis detection kit s7100; Chemicon international Inc, Temecula, USA) was performed according to the manufacturer’s protocol. Briefly, total of 1×105 cells/ml were incubated with celecoxib and/or luteolin for 72 h. Then, the cells were washed and incubated with staining solution (10 μl of TdT reaction buffer, 0.75 μl of TdT enzyme, and 8 μl of FITC-dUTP) overnight. The following day, cells were rinsed and resuspended in 1 ml PI/RNase solution. After incubation in the dark for 30 min at room temperature, a manual cell count was performed to obtain the percentage of apoptotic cells.

Annexin V-FITC and PI staining was performed using the detection kit according to the manufacturer’s protocol (BD Pharmingen, CA, USA). Total of 1×105 cells/ml were incubated with celecoxib and/or luteolin for 72 h. The cells were washed with cold phosphate-buffered saline and suspended in 100 ml buffer (10 mM HEPES, 10 mM NaOH (pH 7.4), 140 mM NaCl, 2.5 mM CaCl2). After 5 ml of Annexin V-FITC and 5 ml of PI were added, the cells were incubated for 15 min at room temperature in the dark. After this incubation, 400 ml of binding buffer solution was added, and the cells were analyzed via flow cytometery. The quadrant containing Annexin V-FITC-positive/PI-negative cells represents early apoptotic cells, and the quadrant containing Annexin V-FITC-positive and PI-positive cells represents cells undergoing the end stage of apoptosis, necrotic cells or dead cells.

Statistical analyses were performed between control and treatment groups and among the different experimental groups. Continuous data are presented as the means and standard error deviations with median values. Comparisons of means were carried out using One way ANOVA. Differences with a value of P<0.05 were considered to be statistically significant.

Effect of celecoxib and luteolin on breast cancer cells in vitro

As shown in Figs. 1 and 2, the celecoxib and luteolin combination treatment significantly decreased cell viability and demonstrated greater efficiency in inducing tumor cell death after 72 h of treatment, compared to treatment with either alone or the controls in both cell lines (P=0.01). This was observed in a concentration- and time-dependent manner.

Quantification of the analysis of Annexin V-FITC apoptosis.

To determine the effect of celecoxib and/or luteolin treatment on the expression of representative pro-survival markers, western blots were performed to analyze the steady-state levels of β-catenin, STAT3, Akt and pAkt (Fig. 5). Decreased levels of Akt phosphorylation (pAkt) were noted after combination treatment compared with β-catenin, STAT3, and Akt (P<0.05). pAkt was significantly decreased in the MCF-7 and MDA-MB-231 cells following combination treatment (P=0.02).

The effect of celecoxib and luteolin combination treatment for breast cancer has not been reported. However, in the present study, celecoxib and luteolin combination treatment of breast cancer cells resulted in a synergistic effect on the cell death in a concentration- and time-dependent manner when compared to treatment with either drug alone. Celecoxib was developed as a selective COX-2 inhibitor for the treatment of chronic pain in arthritis. However, considering the regulatory role of various antitumor signaling pathways, inhibition of COX-2 by celecoxib can induce proapoptotic effects. Suh et al reported that celecoxib significantly decreased MCF-7/HER2-18 and MDA-MB-436 breast tumor growth in vitro(15). Basu et al reported that celecoxib treatment altered the expression of genes associated with angiogenesis, proliferation, apoptosis, and the cell cycle (16). In vitro results were corroborated in vivo in tumor-bearing mice treated with celecoxib. In the present study, we have shown that celecoxib treatment decreases cell viability and increases cell death after 72 h of treatment in both ER-positive and -negative human breast cancer cells (P<0.05). Celecoxib inhibited tumor growth by increasing apoptosis. In the MCF-7 and MDA-MB-231 cell lines, the percentage of cells undergoing apoptosis increased by 45% and 26% from the control, respectively.

Luteolin induces several beneficial effects, including acting as an anti-inflammatory and anticancer agent. Chiang et al reported that luteolin significantly suppresses the growth of MCF-7 and MDA-MB-435 breast tumor in vitro(17). Shinh et al reported that luteolin significantly decreased MCF-7 and MDA-MB-231 breast tumor growth in vitro(18). We have shown that the viability of MCF-7 cells was inhibited by luteolin after 72 h of treatment in a time-dependent (P=0.02) and concentration-dependent manner (P=0.04). In the MCF-7 cell line, the percentage of cells undergoing apoptosis increased by 20% from the control to the treated cells. However, in the MDA-MB-231 cell line, luteolin treatment did not inhibit cell viability concentration-dependently (P=0.78) or time-dependently (P=0.13).

The pro-oncogenic mechanism of the COX-2 is not fully understood. Ghosh et al showed that prostaglandin E2 (PGE2) was the major downstream effector of COX-2 (19). Activation of the epidermal growth factor receptor (EGFR) via PGE2 could result in activation of Ras and the mitogen-activated protein kinase (MAPK) pathway (20,21). Protein kinase B (Akt/PKB) activity is implicated in K-Ras-induced expression of COX-2, and the stabilization of COX-2 mRNA partly depends upon the activation of Akt/PKB (22). For example, PGE2 inhibits apoptosis by stimulating the PI3kinase/Akt pathway. Furthermore, celecoxib was able to bind to and inhibit 3-phosphoinositide-dependent protein kinase-1 (PDK1). PDK1 is an essential component of cell growth and survival signaling pathways involving PI3K, upstream of PDK1, and Akt/PKB, downstream of PDK1 (11,23). Since Akt/PKB has a regulatory role of in pro-oncogenic pathways, the discovery of its inhibition by celecoxib provides a suitable explanation for the drug’s COX-2 anticancer effects.

As an anticancer agent, luteolin inhibits proliferation of SCC-9 human oral squamous carcinoma cells, blocks DMBA-induced DNA adduct formation and cytotoxicity in MCF-7 cells, and inhibits CYP1A1 and CYP1B1 EROD activity (24–26). Furthermore, luteolin inhibits the proliferation of several cancer cell line via the inhibition of the protein tyrosine kinase activity and autophosphorylation of EGFR, transphosphorylation of the EGFR downstream effecter protein enolase and activation of MAPK/ERK (27). Luteolin is able to inhibit IGF-1-induced activation of IGF-1R and Akt, and phosphorylation of Akt (28).

Therapeutic selectivity is important in anticancer treatments. The use of celecoxib has drawn much attention since the review of cardiac safety compared to another COX-2 inhibitor (29). Horinaka et al and Chen et al showed that luteolin induces marginal cytotoxicity in normal cells (30,31). These results imply that luteolin is relatively safe when used as an anticancer agent. The anticancer properties of luteolin have been tested in conjunction with other anticancer drugs. Luteolin was observed to increase drug-induced cytotoxicity in a variety of cancer cells (14). These results support the idea that a celecoxib and luteolin combination treatment will provide a better therapeutic strategy to treat breast cancer than treatment with celecoxib alone.

The study was funded by Catholic University of Korea St. Vincent’s Hospital. 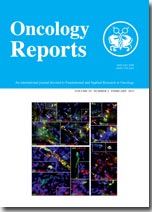