Non-alcoholic fatty liver disease (NAFLD) encompasses a spectrum of liver diseases in the absence of significant alcohol consumption. The aim of this study was to investigate the effect of quercetin on insulin resistance and lipid metabolic abnormalities in free fatty acid (FFA)‑ and insulin‑induced HepG2 cell model of NAFLD, and to determine the possible underlying mechanism. Quercetin markedly improves hepatic lipid accumulation and decreases the levels of triglyceride (TG). The lipid‑lowering effect of quercetin at concentrations between 0.1 and 100 µM demonstrated a dose‑dependent pattern. Quercetin was found to enhance tyrosine phosphorylation in the insulin‑signaling pathway and to downregulate the expression levels of the sterol regulatory element-binding protein-1c (SREBP-1c) and fatty acid synthase (FAS) in quercetin‑treated groups, compared to the control group. These results demonstrated that quercetin was able to improve insulin resistance and hepatic lipid accumulation by suppressing two lipogenesis gene expression levels of SREBP-1c and FAS. As a result, quercetin has the therapeutic potential for preventing or treating NAFLD and IR‑related metabolic disorders.

Non-alcoholic fatty liver disease (NAFLD) is characterized by histological changes similar to those observed in individuals with alcoholic hepatitis, while alcohol intake is absent or not significant. NAFLD includes conditions ranging from bland steatosis to nonalcoholic steatohepatitis (NASH), and it has also been associated with obesity and metabolic syndromes (1). Pathogenesis of NAFLD is believed to be a result of a series of liver insults, also known as the ‘multi-hit’ hypothesis (2–4). Insulin resistance-induced hepatic steatosis constitutes the first hit that leads to elevated serum levels of non-esterified or free fatty acids (FFAs). Subsequently, the increased transport of FFAs into hepatocytes leads to enhanced hepatic de novo lipogenesis with exceeded hepatic FFA β-oxidation and an extremely low-density lipoprotein (VLDL) export, resulting in hepatic steatosis. A number of previous studies have suggested hepatic steatosis to occur due to an increase in lipogenesis and a decrease in lipid export.

NAFLD treatments have mostly targeted the main components of the metabolic syndrome, including obesity, diabetes, hypertension and dyslipidemia. Additional mediations have focused on insulin resistance, oxidative stress, pro-inflammatory cytokines, apoptosis, bacterial overgrowth and the angiotensin pathway, the pathways potentially involved in the pathogenesis of NAFLD. No pharmacological agent has been approved for the treatment of NASH, or has been determined for routine use in the clinic (5).

Quercetin is one of the most studied flavonoids. It is present in several fruits, vegetables, nuts and seeds mainly as glycoside and, thus, is a main component of the daily human diet (6). Quercetin is known to protect cells from oxidative stress and it has also been shown to modify eicosanoid biosynthesis, prevent platelet aggregation, protect low-density lipoprotein from oxidation and promote relaxation of cardiovascular smooth muscle (6). The anti-oxidant activity of quercetin has often been suggested to be associated with a pharmacological function in the cardiovascular system (7). The aim of this study was to investigate the effect of quercetin on NAFLD. Consequently, the effects of quercetin on FFA-induced steatosis and insulin-induced IR in HepG2 cells as well as the underlying mechanism of action were examined. The characteristics of the cell model used were consistent with the pathogenesis characteristics of NAFLD, a fact facilitating the investigation of potential effective therapies for NAFLD.

HepG2 cells were grown as a monolayer culture in Dulbecco’s modified Eagle’s medium (DMEM) supplemented with 10% fetal bovine serum (FBS), 100 U/ml penicillin, 100 g/ml streptomycin, in monolayer culture, and were incubated at 37°C in a humidified atmosphere containing 5% CO2 in air. The experiments were performed when cells reached ∼80% confluence. All cell culture components were purchased from Gibco-BRL (Carlsbad, CA, USA). The HepG2 cell model of FFA-induced steatosis and insulin-induced IR was developed as previously described (8,9). Cells (1×104/ml) were plated into a 48-well plate containing 100 μl of cell culture medium in triplicate. When ∼80% confluence was reached and HepG2 cells were cultured in FBS-free medium for 24 h, the cells were treated with 500 μl of FFA solution (1.0 mM) and insulin (50 nM) to develop a steatosis model with IR for 48 h. Control cells were treated with FFA-free medium containing 0.1% dimethyl sulfoxide (DMSO) and 1% bovine serum albumin (BSA).

Cell proliferation was determined using an MTT assay as previously described (10). Briefly, 1×104 cells/ml were plated in a 96-well plate containing 100 μl of cell culture medium in triplicate and were treated with various concentrations of quercetin (0.5, 1,5, 10, 50 and 100 μM; National Institute for the Control of Pharmaceutical and Biological Products, Beijing, China). The effects of quercetin on HepG2 cell growth were then determined using optical density absorbance, as previously described (10).

To estimate the lipid accumulation, the cellular lipid droplets were stained using ORO, according to a method described in a previously published study (11). After removing the induction solution from each well of the 48-well culture plate, the cells were washed three times with PBS and incubated with formalin (10% formaldehyde, 90% PBS) for 15 min, and then fixed. After fixing, cells were washed 3–4 times with tap water. ORO solution (500 μl) was then added to each well and the cells were incubated at room temperature for 15 min. After removing the ORO solution from each well, the cells were washed a number of times with ddH2O until the solution became clear. After being dried and mounted with glycerin, the cells were examined under a light microscope, and the red oil droplet in staining in the cells indicated FFA-induced steatosis. Isopropanol (200 μl) was added to each well. After shaking and incubating at room temperature for 15 min, the extract was added to a 48-well culture plate and the absorbance was determined at 500 nm.

Determination of triglyceride in the HepG2 cell model

Following removal of the induction solution from each well of the 48-well culture plate, the cells were washed three times with PBS. RIPA extract was added to each well on ice for 10–20 min. The cells were then collected and lysed using ultrasonication methods. Supernatant (50 μl) was used for protein assay by coomassie blue. Double mixture of chloroform and methanol (2:1) were added to the other supernatant and the solution was then mixed. After resting for 30 min, samples were centrifuged (4°C; 12,000 × g; 2 min), the upper solution was removed and the lower solution was dried at 70°C. PBS (20 μl) was added to dissolve lipids (12). TG was determined using a kit, according to the manufacturer’s instructions (Bei Hua KangTai Clinical Reagent Co., Beijing, China).

Total RNA was extracted from the cells using TRIzol reagent. Complementary DNAs (cDNAs) were synthesized using the High-Capacity cDNA Reverse Transcription kit (Applied Biosystems, Inc., Foster City, CA, USA). Semi-quantitative detection of peroxisome proliferator-activated receptor α (PPARα), SREBP-1c, FAS, fatty-acid-binding proteins (FABP), carnitine O-palmitoyltransferase-1 (CPT-1), microsomal TG transfer protein (MTTP) and β-actin was performed. Primers for each gene (Table I) were synthesized by China Takara Biomedical Technology (Beijing, China). PCR amplification was performed in a total volume of 20 μl, containing 1 μl cDNA solution, 10 μl of 2X PCR Master mix, 0.25 μl of each primer at 10 μM and 8.5 μl of nuclease-free water. PCR was conducted for 28–30 cycles. PCR conditions were: denaturation at 94°C for 2 min, 28–30 cycles of 94°C for 30 sec and annealing at 54°C for 2 min, extension at 72°C for 1 min and a final extension at 72°C for 5 min. The PCR products (10 μl) were run in a 1.5% agarose gel, and the DNA was visualized by ethidium bromide, using UV transilluminator and then photographed. The signal intensities were estimated using the Gel Doc™ software. β-actin was used to normalize the expression values of the other genes.

Sequences of the primers used in the PCR measurements.

[i] PCR conditions were as described in the Materials and methods.

Results were shown as the means ± standard deviation (SD). Differences were evaluated by one-way analysis of variance (ANOVA). P<0.05 was considered to indicate a statistically significant difference.

Effects of quercetin on TG levels in the HepG2 cell model

In order to investigate the mechanisms of quercetin-improving hepatic lipid accumulation, we monitored the mRNA levels of PPARα, SREBP-1c, FABP, CPT-1, MTTP and FAS in various groups. The results demonstrated that SREBP-1c and FAS expression was reduced in the quercetin-treated compared to the model group (P<0.01) (Fig. 4A). The mRNA expression levels of PPARα, FABP, CPT-1 and MTTP did not demonstrate a statistically significant change in each group (Fig. 4A). We confirmed the protein expression of SREBP-1c and FAS, using western blot analysis. The results also showed that quercetin downregulated SREBP-1c and FAS gene expression (Fig. 4B).

NAFLD includes a spectrum of diseases that have insulin resistance in common and are associated with metabolic conditions, such as obesity, type 2 diabetes mellitus and dyslipidemia. The prevalence of NAFLD has been on the increase in the last two decades and it affects ∼30% of the adult population in the USA (13). Currently, no pharmacological agent has been approved for the treatment of NASH, or has been included for use in the clinical practice. As a result, novel drugs are needed for the treatment of NAFLD.

Quercetin, one of the most studied flavonoids, has a variety of biological functions, including antioxidant, anti-inflammatory, anti-virus and anticancer effects. In the present study, we examined the effect of quercetin on insulin resistance and the hepatic lipid accumulation of NAFLD as well as the underlying mechanism, in order to identify effective therapies.

Insulin resistance and steatosis are highly involved in the development of NAFLD. We used a NAFLD cell model of FFA-induced steatosis and insulin-induced IR, characteristics that are consistent with the pathogenesis of NAFLD, in order to investigate the effect of quercetin on NAFLD. The results of ORO staining and TG level examination showed markedly accumulated intracellular lipids and higher TG levels in the HepG2 cell model. These results might be used for the investigation of disease mechanisms as well as the development of novel therapy for NAFLD.

The association between NAFLD and insulin resistance is known to be almost universal (14). Phosphorylation of IRβ and IRS1 was found to be improved in the quercetin-treated group, suggesting that quercetin improved IR by enhancing insulin signal transduction.

NAFLD is one of the most common forms of liver disease worldwide. The exact mechanisms promoting progressive liver injury are not well-defined, although substrates derived from adipose tissues, such as FFA, tumor necrosis factor-α (TNF-α), leptin and adiponectin have been suggested. The NAFLD cell model induced by FFA and insulin may be used for the investigation of the mechanism of development, pathogenesis and treatment of diseases. As a result, quercetin might protect the liver from NAFLD and also decrease hepatic lipid accumulation by reducing fatty acid syntheses, as well as improve insulin resistance through the regulation of the insulin signaling pathway.

This study was supported by the Natural Sciences Fund of the Inner Mongolia Autonomous Region (no. 20080404Zd31). 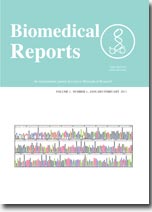