Glia make up the majority of the cells present in the brain. They do not fire action potentials like neurons, but instead surround and ensheath neuronal cell bodies, axons and synapses to protect and maintain the microenvironment throughout the nervous system. Of these glial cells, microglia exhibit unique and specific characteristics in the central nervous system (1). Microglia serve as the resident innate immune cells in the brain and respond quickly to brain injuries and immunological stimuli, changing from resting branched microglia into activated, amoeboid microglia, undergoing dramatic alterations in morphology, which is thought to favor phagocytosis and mobility (2). In order to understand the cell biology of microglia more directly, an increasing number of studies are being performed in vitro using both primary microglial cultures and immortalized cell lines.

Mitogen-activated protein kinase (MAPK)-mediated signaling serves a critical role in the activation of microglia, including modulation of the p38, extracellular signal-regulated kinase (ERK) and JNK cascade (3). The p38 cascade has been implicated in cell death triggered by cytokines, growth factor withdrawal and environmental stressors (4). A previous in vivo study showed that in chronic pain models, p38 phosphorylation in the spinal cord was upregulated (5,6), which has been reported to be exclusively expressed on microglia (7). The ERK pathway, which is activated by growth factors and hormones, is also involved in mediating cellular proliferation, transformation and differentiation (8). Numerous studies have been performed to assess whether certain compounds are able to inhibit microglial activation in vitro, and the effectiveness of these compounds is assessed by measuring the expression of phospho-(p-)p38 and p-ERK as the functional activation markers of microglia (9-11). For in vitro studies, certain studies have cultured microglia in specific media, whereas others have used serum-free media as the control group (12,13), in which case the effect of serum can be disregarded.

In the present study, it was hypothesized that microglial cells could be activated by serum deprivation. The effect of serum deprivation on morphological changes, and on the expression of p-p38 and p-ERK was assessed in primary microglia, BV-2 cell and astrocytes.

Cell culture preparation experiments were conducted between 8:00 am and 4:00 pm. The experimental protocols were performed in accordance with the Animals in Research: Reporting in vivo Experiments (ARRIVE) guidelines (14), and approved by the Institutional Animal Care and Use Committee of Peking University (approval no. LA2012-34).

Primary cultures of cortical microglia were prepared from newborn (within 24 h after birth) ICR mice (15). Mice were sacrificed by decapitation and the brains were removed, followed by careful elimination of meninges and blood vessels under a dissecting microscope in ice-cold DMEM (Gibco; Thermo Fisher Scientific). After mechanical dissociation, the cell suspension was passed through 70-µm nylon filters (Spectra/Mesh; Spectrum Medical Industries). FBS [10% (v/v); Hyclone; Cytvia] was added to the medium containing filtered cell suspensions. The mixed cell suspensions were first seeded at 1x107 cells/ml in 75-mm2 flasks coated with 0.25% poly-D-lysine. Flasks were then incubated at 37˚C, with 95% air/5% CO2 (v/v) and 95% humidity. Culture medium was changed twice per week with DMEM containing 10% (v/v) FBS. After 12-14 days, when the cells were present as two separate layers, the mixed glial culture was placed on a Forma Orbital Shaker (250 rpm; 37˚C; Thermo Fisher Scientific, Inc.) for 4 h. Following agitation, the suspended cells were collected, pooled, centrifuged (room temperature at 500 x g) and re-suspended. Cells were seeded at 3x105 cells/ml in 35-mm2 tissue culture dishes (Corning, Inc.) for identification and 12-well plates for the other experiments.

BV-2 cells were obtained from the Cell Bank of the Chinese Academy of Medical Sciences and grown in DMEM supplemented with 10% FBS. After 3-5 days of seeding the cells in 60-mm dishes, cells were cultured until they were close to 100% confluent. Cells were split 1:5 when they reached confluence, using trypsin solution in PBS. The cells were then were seeded into 35-mm dishes 1 day prior to subsequent experiments.

Primary cultures of cortical astrocytes were prepared from newborn (within 24 h after birth) ICR mice as previously described (16). Briefly, mice were sacrificed by decapitation and the brain cortexes were removed, followed by careful elimination of meninges and blood vessels under a dissecting microscope in ice-cold modified DMEM. After mechanical dissociation, the cell suspension was passed through a 70-µm nylon and then 10-µm filters (Spectra/Mesh; Spectrum Medical Industries). FBS (10%) was added to the medium containing filtered cell suspensions. These mixed cell suspensions were seeded onto 35-mm dishes at 1x106 cells/ml. Culture medium was changed twice per week with DMEM containing 10% (v/v) FBS. After 4 weeks, these astrocytes became mature and ready for use for the subsequent experiments.

The control group were the cells cultured under normal conditions. Cells which were treated with LPS by directly adding LPS (Sigma-Aldrich; Merck KGaA) to the media were considered as the positive control. The remaining two groups were cell cultures in which media was removed and replaced with serum-free medium or serum-free medium containing 100 ng/ml LPS. A light microscope (magnification, x40) was used for observing and capturing images of the morphological changes in cells following treatment. Cell morphology was observed at different time points (within 24 h).

Statistical analysis was performed using GraphPad Prism version 5 (GraphPad Software, Inc.). All data are presented as the mean ± the standard error of the mean. Differences between groups (quantification of western-blot results) were compared using a one-way ANOVA and corrected using a Bonferroni's correction. P<0.05 was considered to indicate a statistically significant difference.

LPS treatment resulted in rapid upregulation of p-p38. The time of peak p-p38 expression was thus determined. Fig. 3 shows that the expression of p-p38 increased within 30 min and peaked at 1 h, which was significantly different from the control group; after which it decreased gradually, but remained higher than the control group. Thus, a time point of 1 h was used for subsequent experiments.

Effect of serum deprivation on p-p38 and p-ERK expressions in microglia, BV-2 and astrocytes

In the present study, it was found that: i) Once serum was depleted, the processes of primary microglia and BV-2 cells became shorter and the body became more rounded in shape, indicative of activation; ii) serum deprivation significantly increased the expression of p-p38 and p-ERK in the primary microglia and BV-2 cell culture, and iii) both morphological changes and upregulation of p-p38 and p-ERK caused by serum deprivation were not observed in the primary astrocytes within the limited time period assessed.

Microglia serve as immune cells monitoring the brain's microenvironment for any damage (17). It has been reported that the rapid and constitutive motion of microglial processes contributes to their function (18). Toll-like receptors (TLRs) are expressed by several cells in the innate immune system, and form part of a larger family of so-called pattern recognition receptors, which sense danger signals in the form of pathogen-associated molecular patterns (19). LPS is a common inflammogen that is used to activate the glia via TLR4 in several animal models of inflammation-mediated neuro-degeneration, including both in vivo and in vitro models (20,21). In the present study, LPS-treated microglia were used as a positive activation control.

MAPKs are critical regulators of pro-inflammatory cytokines which are involved in the inflammatory process. Of the several MAPKs, p38 has been crucial for anti-inflammatory drug discovery, due to its importance in the production of the pro-inflammatory cytokines and other mediators (28). p-p38 and p-ERK are commonly used in in vitro studies as activation markers of primary microglia, microglial cell lines and astrocytes (29,30). Serum-deprivation has been shown to selectively upregulate the expression of certain genes (31-33). The present study demonstrated that serum deprivation significantly increased the expressions levels of p-p38 and p-ERK in primary microglia and BV-2 cell cultures, and this was not observed in primary astrocytes in the limited time period of assessment. Culture medium supplemented with serum provides a migratory stimulus for BV2 microglia (34). Serum deprivation is not only a simple stressful condition compared with others forms of mimicked stresses. For example, serum depletion but not hypoxia and glucose depletion increased mRNA, protein and enzyme activity of SPHK2, and this was dependent on activation of the JNK/CREB signaling pathway, although the cells grew slowly compared with cells grown in supplemented culture (35). Serum deprivation caused cell death, nuclei condensation and upregulation of Bax expression in cultured microglia. SB203580, a specific inhibitor of p38MAPK, was able to reverse cell death (36). It is also hypothesized that overstimulation or overactivation of microglia results in microglial apoptosis (37,38). Serum exposure influences microglial survival, specification and function (24). MTT analysis (data not shown) was used to assess the cell viability caused by serum deprivation, which did not cause significant levels of cell death. Thus, 24 h was selected as the longest time point for observation of morphological changes. Cell death may have increased if serum deprivation was prolonged. It is speculated that serum deprivation causes the activation of microglia over a short period of time, while microglia may eventually die due to longer periods without an adequate nutrient supply.

In summary, the present study showed that microglia responded quickly to external stimuli both in vivo and in vitro. The biological responses of microglia were different to that of astrocytes to a certain degree. In serum-deprived conditions, the morphology of microglia changed such that the processes became shorter and vesicles were present in the cell body. The expressions levels of p-p38 and p-ERK were also upregulated in both primary microglia culture and BV-2 cell lines. However, all the aforementioned changes were not observed in astrocytes. In addition to the changes in the levels of phosphorylated MAPKs and morphology, other changes may also occur in the cell lines following serum deprivation and/or LPS treatment, and these require further study.

We would like to thank Professor Albert Cheung Hoi Yu and his lab (Peking University and Department of Neurobiology, Peking University Health Science Center) for their aid with the cell culture.

The present study was supported by a grant from the Discipline Construction Fund of Beijing Stomatological Hospital (grant no. 17-09-12).

The experimental protocol was performed in accordance with the Animals in Research: Reporting in vivo Experiments (ARRIVE) guidelines, and approved by the Institutional Animal Care and Use Committee of Peking University. 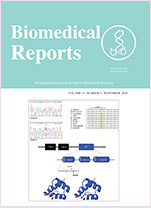