OCT angiography, RNFL and the visual field at different values of intraocular pressure

In hypertensive glaucoma (HTG), the ganglion cells of the retina and subsequently the entire visual pathway, including the cortical centers in the brain, are damaged, with high intraocular pressure (IOP) playing a major role (1). Early diagnosis and treatment are important for the preservation of visual function in this disease. Current detection of HTG is based on changes in the nerve fiber layer (RNFL), ganglion cell complex and visual field (VF), in addition to a high IOP. Optical Coherence Tomography (OCT) angiography has improved glaucoma diagnosis as well as research on the examination of vessel density (VD) (2).

With increased IOP, a number of biochemical and morphological processes occur in the visual pathway. Of the pathological changes, the most important change is the shrinkage of predominantly retinal ganglion cells (3-6).

Changes in RNFL are likely secondary; Naskar et al (5) found that ~40% of retinal ganglion cells were lost within 2.5 months of glaucoma induction. However, they did not observe the initial changes in the optic nerve target until 2 months later. In experimental glaucoma, retinal ganglion cell axons degenerate first in their retrolaminar and then in their intraocular regions (7). As not all ongoing abnormalities have been demonstrated in early glaucoma (in vivo), whether certain parameters would be of higher value for determining changes than others should be determined. In the present study, a focus was placed on the status of the blood vessels (based on VD), which play a major role in this disease. In the literature, a large body of research has shown the influence of the amount of IOP on VD in HTG. Conversely, work on the relationship between VD and RNFL in normal IOP is lacking in the ophthalmic literature.

The aim of this study was to investigate the relationship between IOP and VD, RNFL parameters and total visual field (VF) defects in eyes with values of IOP ranging from 17-34 mmHg.

Correlation analysis between the measured parameters in the entire cohort.

Correlation between the measured parameters in the 18 eyes with an IOP ≤20 mmHg.

Correlation between the measured parameters in the 39 eyes with an IOP of 20-22 mmHg.

Correlation between the measured parameters in the 32 eyes with an IOP of 22-24 mmHg.

Correlation between the measured parameters in the 33 eyes with an IOP of ≥24 mmHg.

Early diagnosis and treatment is very important for preserving visual function in patients with HTG. The question remains as to which investigations, other than IOP values, are most relevant for improving diagnosis.

However, more important for clinical ophthalmology are the results of the examinations, which can provide clues about the early diagnosis as well as the pathogenesis of glaucoma. These undoubtedly include OCTA and RNFL (8-19). Relatively recently, in the study of glaucoma, special interest has been paid to VD in glaucoma. In PubMed alone, at the time of writing, there were 512 papers on this subject. Feher et al (20), using electron microscopy, demonstrated that increased IOP induced ultrastructural modifications of the microvessels of the optic nerve head. The number of β-adrenergic receptors increased markedly in the eyes of patients with raised IOP values. Further studies are required to clarify the physiological and pathological roles of these receptors (20).

A high correlation between VD and RNFL was also observed by Yu et al (8). Lee et al (9) suggested that the decrease in VD in glaucoma is a secondary consequence of RNFL loss, and Triolo et al (10) took a similar view.

As glaucoma progresses, VD decreases (12), whilst RNFL decreases (10-13). However, Khayrallah et al (14) demonstrated a lower validity of OCTA than RNFL at different stages of HTG (15), with other studies having reached similar conclusions (15,16). Thus, as HTG progresses, VD and RNFL decrease (17). Rao et al (18) demonstrated a faster progression of RNFL loss with reduced VD (18). In addition to the direct effect of IOP on VD, glutamate may have a secondary effect; with higher levels of glutamate at all levels of the visual pathway in HTG (21), there is also an ischemic effect on the surrounding vascular system (22). This may be one of the reasons why vascular alteration may occur before the degeneration of RNFL, even with in a patient with a normal IOP. Conversely, with RNFL atrophy, there is a subsequent change in VD.

Mansoori et al (19) demonstrated that peripapillary VD is responsible for RNFL nutrition. A high IOP induced a significant decrease in vessels per unit area in the laminar and retrolaminar regions of the optic nerve (23). There was also a decrease in the capillary length per unit volume. After the application of timolol and latanoprost, the diameter of the vessels of the studied area improved, but the density of the capillaries did not change (23). This is important information for understanding the development of HTG. In clinical ophthalmology, one cannot wait for other significant irreversible changes to appear, and it is hypothesized that these irreversible changes have likely already occurred after an increase in IOP on the optic nerve vessels.

Magnocellular ganglion cells are localized in the periphery of the retina (24), and thus does not have the same validity as RNFL examination. Existing VF examination programs in glaucoma mainly focus on the central region of the VF. Regarding the choice of the test, Heijl and Patella recommend the use of a central 30˚ examination in glaucoma with 54 examination points (Humphrey field analyzer from Carl Zeiss Meditec SRN) (25). This view is shared by the authors of the fourth edition of Essential Perimeters (26). The Medmont device examines the VF in glaucoma from 0-22˚ temporally, and 0-50˚ nasally, for a total of 104 points.

As ganglion cell fibers converge on the optic nerve target, their examination is also much more accessible and has a higher sensitivity than VF examination. Therefore, even changes in ganglion cells that are not detectable by VF examination will show up in the RNFL on the optic nerve target (27). When using the Medmont device to examine the VF, the overall defect and pattern defect indices are used (28). In our previous study, the specificity of OD VF for HTG was confirmed (27). Therefore, this parameter was selected for analysis in the present study. In the present study, RNFL and OD were moderately correlated only in the group of eyes with IOP ≥24 mmHg. In the other groups, there was a very weak correlation. However, changes in OD of VF were already observed in eyes where the IOP was 20-22 mmHg. There was a moderate correlation between IOP and OD in eyes with IOP >24 mmHg. With an increase in IOP, RNFL changes and damage of the posterior pole vessels was observed in this study. The most important factor of this study was the identification of the relationship between VD and RNFL; in the eyes with an IOP value ≤20, a moderate to strong correlation was observed between these parameters. This relationship increased as the IOP value increased, with a very strong correlation in the eyes with an IOP value >24 mmHg).

The clear and most important conclusion of this paper is the relationship between VD and RNFL. In the eyes with an IOP value ≤20, a moderate to strong correlation between these parameters was observed, and this relationship increased with increasing IOP, up to a very strong correlation in eyes with an IOP value >24 mmHg. Optic nerve angiography should be a useful and integral part of the diagnosis of hypertensive glaucoma.

All datasets generated and/or analyzed during the current study are available from the corresponding author on reasonable request.

JK and JL are the authors of the main idea and designed and created the main theoretical parts of this review. EN contributed to the design and implementation of research, examination image results analysis and to writing of the manuscript. All authors have read and approved the final manuscript.

All patient results and images included in this review were retrospectively used with prior patient consent. The consent was in accordance with the principles stated in the Helsinki Declaration and as approved by the Internal Ethics Committee of the Eye Clinic JL Faculty of Biomedical Engineering CTU in Prague. 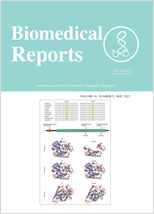