Transient receptor potential channel 6 (TRPC6) channels constitute non‑selective cation channels that are localized in the plasmalemma or sarcolemma, and have a leading permeability for the bivalent calcium ion. Animal models indicate an involvement of TRPC6 in malignant hyperthermia. The expression of TRPC6 in the sarcolemma has been demonstrated in the skeletal muscle fibers of mice. The importance of TRPC6 channels for the influx of calcium into the muscle cell has also been established. The presence of TRPC6 in tissues of human skeletal muscle is surmised. In order to confirm the presence of TRPC6 in human skeletal muscle, tissue samples of various skeletal muscles (Musculus deltoideus, pectoralis major, trizeps brachii and rectus femoris) from eight different human donors (n=8; six preserved cadavers and two non‑preserved cadavers) were examined using immunohistochemistry. TRPC6 was found in all muscle fibers of all investigated bodies. Appropriate controls yielded the expected results. As demonstrated in animal studies and in studies of human cells, the presented results confirmed the presence of TRPC6 in human skeletal muscle tissue. Thus, TRPC6 is most likely important for calcium homeostasis and the proper function of human muscle fibers and may be a target for treatment in various muscular diseases.

The expression of transient receptor potential channel 6 (TRPC6) was investigated using real-time PCR in rat tissues and it was revealed that the highest level of expression was found especially in the lungs, cerebrum and ovaries (1). Further investigations provided evidence of the occurrence of TRPC6 in the smooth muscle cells of human blood vessels and their functional significance (3). In an investigation on the calcium regulation of dystrophin-deficient skeletal muscle of mice, with the help of antibody-based immunofluorescence staining, TRPC6 was found in the sarcolemma of muscle fibers and to a lesser extent in the cytoplasm (4). The authors of this study concluded that TRPC6 may contribute to the influx of calcium. A previous study revealed that a mutation in the TRPC6 channel is associated with focal segmental glomerulosclerosis, which ultimately leads to kidney failure through the death of podocytes (5). Further associations with regard to TRPC6 and pathophysiological conditions have been described for idiopathic pulmonary hypertension, in which the channels lead to the progression of the disease due to increased calcium influx (6,7), but also for malignant hyperthermia, in which TRPC6 was shown to be involved in the pathophysiological process in a mouse model (8). The latter study reported that muscle fibers of mice expressing a distinct mutation (RYR1-p.G2435R) are hypersensitive to activators of TRPC3/6 and have increased resting intracellular calcium and sodium (8). This hypersensitivity can be stopped using agents which inhibit TRPC3/6 indicating that TRPC channels play a crucial role in causing intracellular overloads of calcium and sodium in malignant hyperthermia-susceptible muscle.

For this investigation six human cadaver donors from the local body donation program of Saarland University and two cadavers from the departments of the Institute of Pathology of Saarland University, were used. The bodies of two cadavers were not preserved, while four donors were preserved according to a protocol in a previous study by Janczyk et al (11) and two other donors using classical formaldehyde fixation. Data of the body donors is provided in Table I.

List of skeletal muscle samples which were investigated using immunohistochemistry.

[ii] bAccording to a protocol in a previous study by Janczyk et al (11).

The present study was approved by the Permanent Ethics Committee of the Saarland Medical Association (Ärztekammer des Saarlandes), Saarbrücken, Germany (approval no. 163/20 for samples obtained from the Department of Anatomy and approval no. 130/21 for the samples obtained from the Department of Pathology of Sarlaand University, Homburg, Germany). This committee is responsible for all medical research projects in Saarland.

Samples from the Departments of Anatomy and Pathology of Saarland University were obtained from May to October 2021. A biopsy punch and a scalpel were used to remove the tissue from the Musculus (M.) deltoideus, pectoralis major, trizeps brachii and rectus femoris from the right half of the bodies of the donors. For comparability M. pectoralis major samples from each donor were used. Furthermore four M. rectus femoris, four M. trizeps brachii and five M. deltoideus samples were included.

After fixation in 4% buffered formaldehyde at room temperature overnight the specimens were embedded in paraffin and 7-µm thin sections were prepared using a microtome. The specimens were first stained with hematoxylin and eosin (H&E) at room temperature for 5 min and assessed to determine the intact morphology. The first step of IHC was antigen retrieval using 1% citrate-buffered solution for 60 min at 95˚C in heating incubator. After washing the samples twice for 2 min in PBS each time, they were incubated with a knockout-validated antibody against TRPC6 channel antigen structures (cat. no. ACC-017; Alomone Labs). The specificity and quality of the antibody was assessed using peptide-blocked control samples (cat. no. BLP-CC017; Alomone Labs). For antibody specificity, 40 µg control peptide was dissolved with 20 µl PBS and then incubated with 40 µl 1:100 diluted TRPC6 primary antibody overnight at 7˚C, in tubes. Negative controls were incubated with rabbit serum (from an untreated rabbit obtained from the Institute for Biochemistry, Homburg, Germany) instead of TRPC6 antibodies. The protein concentration in both solutions was similar (~0.01 mg/ml). Horseradish peroxidase-conjugated goat anti-rabbit antibodies (cat. no. A10547; 1:500; Invitrogen AG; Thermo Fisher Scientific, Inc.) were used as secondary antibodies. The sections were incubated with the secondary antibodies for 10-12 h at room temperature in a humidity chamber. The dilutions as aforementioned (1:100 and 1:500) were performed with normal goat serum (cat. no. 01-6201; Invitrogen; Thermo Fisher Scientific, Inc.). The added chromogen, diaminobenzidine (cat. no. SK-4103; Vector Laboratories, Inc.), became visible as a brown color after the HRP substrate catalyzed the reaction. The incubation time with the DAB substrate was 10 min. A total of 21 samples were examined using this procedure. Evaluation was performed using a light microscope (Nikon Eclipse E200; Nikon Corporation). Microphotographs were obtained using a digital camera (TrueChrome Metrics with software TCapture; Tucsen Photonics Co., Ltd.).

The results were evaluated microscopically and the samples were categorized according to staining intensity: Strong, weak and negative. From all the investigated samples, 19 samples exhibited strong staining and 2 samples exhibited weak staining. Nearly all (11 out of 12) samples that were preserved according to a protocol in a previous study by Janczyk et al (11) showed a strong immunohistochemical signal (Fig. 1, M. pectoralis major), while one sample was weakly stained. The four unfixed skeletal muscle samples consistently showed a strong immunohistochemical signal similar to the protocol by Janczyk et al (11). The five samples preserved using classical formaldehyde fixation showed a strong immunohistochemical signal in four cases (Fig. 2, M. triceps brachii), and a weak signal was detected in one case. Both controls, the normal rabbit serum control (Fig. 3) and the control with the peptide pre-incubation (Fig. 4), exhibited almost no immunohistochemically-stained structures. Another representative example of the presence of TRPC6 was revealed in a sample of M. deltoideus, which was obtained from an autopsy of a non-preserved cadaver (Table I, donor 8; Fig. 5, M. deltoideus). Collectively, representative examples of TRPC6 detection in human bodies are presented in M. deltoideus (Fig. 5), M. pectoralis major (Fig. 1) and M. triceps brachii (Fig. 2). An example of M. rectus femoris was lacking since it appeared identical to the other skeletal muscles. Skeletal muscles were presented from three different post mortem conditions: Non-preserved (Fig. 5), preserved according to the protocol by Janczyk et al (11) (Fig. 1) and preserved using classical formaldehyde fixation (Fig. 2).

All skeletal muscle fibers were labelled with brownish color whereas the fat cells were not labelled (Fig. 5). In summary, TRPC6 was found in the fibers of all investigated skeletal muscles independent of whether the tissue was freshly obtained during autopsy or after preservation.

The immunohistological data for TRPC6 using the described Alomone antibody appears to be valid since corresponding bands in the western blots were absent when tissues from knockout mice were assessed (12). A limitation of the present study is that it is lacking western blot analysis because the unfixed tissue was prepared for histology. However, western blotting was performed using the identical TRPC6 antibody as aforementioned with homogenized human vessels containing mainly smooth muscle tissue. This was a recently published study (13).

To investigate human tissues, the body donation programs of anatomical institutes are of great value if the body donors have agreed to their donations not only for teaching but also for experimental research in an informed consent during their lifetime.

It is necessary to preserve the bodies for different purposes such as anatomical or surgical teaching and research. In the present study, it was demonstrated that both a classical preservation using formalin and a ‘soft preservation’ using pickle salt and alcohol could conserve a protein of interest and did not inhibit its detection using immunohistochemistry.

In summary, the present study detected TRPC6 protein in human skeletal muscle tissue for the first time, to the best of our knowledge. The results are consistent with a previous study, in which, for example, skeletal muscle of the mouse displayed channels in the sarcolemma (4). This study assessed the mRNA expression, protein levels and localization of TRPC3, TRPC6, TRPV4 and TRPM7. All these aforementioned channels may mediate store-operated, stretch-activated and background Ca2+-influx into muscle fibers. In addition, this previous study revealed that further investigations are required to ascertain whether TRP channels could be targets for new drugs of Duchenne muscular dystrophy (4).

However the exact localization should be investigated further using high-dissolving techniques such as immune electron microscopy. The junctional sarcoplasmic reticulum including L-tubule and T-tubule and the triads play a major role in the electro-mechanical linkage and are areas where calcium channels are localized (14). For the non-junctional sarcoplasmic reticulum within striated muscles, it has been demonstrated in 293 cells that TRPC channels interact with the proteins junctate and inositol-1,4,5-triphosphate receptor (15). Junctate has been demonstrated to be associated with the calcium ion content of the stores of the sarcoplasmic reticulum (16). Junctate has also been identified as a calcium-sensing component of ORAI1 and stromal interaction protein 1 (STIM1) (17,18). Notably, TRPC3 and presumably TRPC1 interact with triadic proteins such as ryanodine receptor type 1 (RyR1) and are involved in the release of calcium ions during the excitation-contraction process (19). In this previous study RyR1- or TRPC3-interacting triadic proteins were found by using a co-immunoprecipitation assay after establishing potential candidate proteins with chemical cross-linking of triadic proteins and mass spectroscopy. The results indicated that in muscle, TRPC3 and RyR1 interact indirectly via a linker protein, TRPC1. A panel of data is available on the physiological and presumed pathological role of TRPC channels in smooth muscle cells (20-22). The presented study is limited to descriptive results. In future, functional investigations with human muscle cells or tissue is necessary.

In view of the studies of animal skeletal muscles in which the importance of TRPC6 and TRPC3 for calcium flux, and thus also for the muscular contraction, was demonstrated (4,19) it is evident that TRPC channels could play an important role. Thus, TRPC6 and TRPC3 and most likely other TRPC channels are important for the calcium homeostasis in human muscle fibers and may be targets for treatment approaches in various muscular diseases.

We would like to thank Ms Irina Scheck, Mr Ronald Dollwett, Ms Helga Meyer and Ms Barbara Michahelles-Horzella (all from the Institute of Anatomy and Cell Biology, Saarland University, Homberg, Germany) for the technical support.

All microphotographs from the present study are available from the corresponding author upon reasonable request.

The present study was approved by the Permanent Ethics Committee of the Saarland Medical Association (Ärztekammer des Saarlandes), Saarbrücken, Germany (approval no. 163/20 for samples obtained from the Department of Anatomy and approval no. 130/21 for the samples obtained from the Department of Pathology of Sarlaand University, Homburg, Germany). 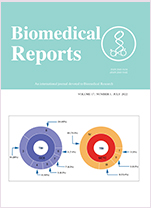