Cilostazol is a selective inhibitor of phosphodiesterase type III that inhibits platelet aggregation. The beneficial effects of cilostazol have been attributed not only to its antiplatelet functions but also to its actions on the endothelium. Whether cilostazol regulates endothelin‑1 (ET‑1) and endothelial nitric oxide synthase (eNOS) through mitogen‑activated protein kinase (MAPK) remains undetermined. The aim of this study was to investigate the effects of cilostazol on ET‑1 and eNOS expression in HUVECs, and to assess its relationship with MAPK activity. HUVECs were cultured in vitro, stimulated with TNF‑α, and pretreated with different concentrations of cilostazol. ET‑1 and eNOS levels in the supernatant were detected by ELISA. RT‑qPCR was performed to detect the mRNA expression levels of ET‑1 and eNOS. The phosphorylation levels of p38/MAPK and protein expression levels of ET‑1 and eNOS were assessed using western blotting. A P38 inhibitor, SB203580, was utilized to further validate the involvement of p38/MAPK in the regulation. Expression of ET‑1, which was upregulated by TNF‑α, was significantly suppressed by cilostazol in a dose‑dependent manner, meanwhile, with as the cilostazol concentration was increased, the expression of eNOS increased as well. In addition, cilostazol also decreased phosphorylation of p38, which was upregulated by TNF‑α. The observed upregulation of eNOS and ET‑1 levels were completely abolished upon p38 inhibitor treatment, indicating the involvement of the p38/MAPK pathway in cilostazol‑induced regulation of eNOS and ET‑1 in HUVECs. The results indicated that cilostazol regulates ET‑1 and eNOS production by suppressing the p38/MAPK signaling pathway in TNF‑α‑stimulated HUVECs, and this may contribute to the protective effects of cilostazol on the endothelium.

The vascular endothelium is an active monolayer of cells lining the entire circulatory system, and it is indispensable for the regulation of vascular tone and in the maintenance of vascular homeostasis (1). Endothelial dysfunction is regarded as a key early event in the development of atherosclerosis and the occurrence of atherosclerotic complications (2,3). Notably, endothelial dysfunction is an established predictor of cardiovascular outcomes (4).

The endothelium regulates the remodeling of the vessel wall by releasing a large number of vasoactive substances. Nitric oxide (NO) is an endothelium-derived relaxing factor that is produced by endothelial NO synthase (eNOS) (5). It protects the vascular system by acting as an endogenous defense against the development of atherosclerosis. The reduction in the generation and bioavailability of NO is accepted as an important factor in the process of atherosclerosis and thrombosis (6,7). Endothelin (ET)-1 is a potent vasoconstrictor produced by endothelial cells that plays a pivotal role in the etiology of atherosclerotic vascular disease (8). It induces endothelial dysfunction and contributes to atherosclerosis by stimulating platelet aggregation, cell adhesion molecule expression and the proliferation of vascular smooth muscle cells (9,10). A pathophysiological imbalance in NO and ET-1 is usually referred as endothelial dysfunction (11).

Cilostazol is a selective inhibitor of phosphodiesterase type III (PDE3) that inhibits platelet aggregation (12). It is widely used in patients after receiving percutaneous coronary intervention (PCI) to reduce the risk of thrombotic events (13,14). The beneficial effects of cilostazol have been attributed not only to its antiplatelet functions but also to its actions on the endothelium. Recent studies suggested that cilostazol could protect endothelial function by inducing NO production (15-17) and decreasing ET-1 production (18,19).

As an important member of the MAPK pathway, p38 MAPK plays an important role in inflammation and stress response. Animal studies have confirmed that p38/MAPK is closely related to the expression and secretion of ET-1 (20,21). It has also been reported that p38/MAPK can regulate the expression of eNOS (22). A number of studies have shown that p38/MAPK is one of the targets of cilostazol, which may explain its endothelial protective effect (23,24). A study published by Chao et al (25) suggested that cilostazol could regulate NO production via the p38/MAPK signaling pathway, however, it did not assess the effects of cilostazol on ET-1. Thus, whether cilostazol regulates NO and ET-1 via the p38/MAPK signaling pathway remains to be determined.

Taking the above evidence together, the objective of this study was to examine the effects of cilostazol on the regulation of ET-1 and eNOS, as well as its relationship with p38/MAPK. HUVECs were used in this study as they have proven invaluable in investigating endothelial damage and repair, and on the potential impact of atherosclerosis during the early stages and during atherosclerosis progression (26). Specifically, HUVECs were exposed to TNF-α and cilostazol with or without specific inhibitors of p38/MAPK, and the changes in p38/MAPK activity, and in the expression levels of ET-1 and eNOS were determined.

HUVECs were cultured at 37˚C in a humidified 5% CO2 incubator and split in accordance with standard procedures. When they grew 60-85% confluent, HUVECs were treated with different concentrations (0, 1, 10 or 50 uM) cilostazol (25) or TNF-α (10 µg/l) for 24 h and then collected for further analysis.

ET-1 and eNOS levels in the cell culture supernatant were quantified by spectrophotometry using ELISA kits according to the manufacturer's protocol (cat. no. H093 and cat. no. H195, respectively; both from Nanjing Jiancheng Bioengineering Institute).

Total mRNA was extracted from HUVECs using TRIzol® reagent. Reverse transcription was performed using a Prime Script RT reagent kit (Takara Bio, Inc.) according to the manufacturer's protocols. The mRNA levels of ET-1 and eNOS were measured by qPCR using an iCycler real-time system (Bio-Rad Laboratories, Inc.). The thermocycling conditions were as follows: An initial pre-denaturation step for 10 sec at 95˚C; followed by 45 cycles of denaturation at 95˚C for 10 sec, annealing at 60˚C for 20 sec and extension at 70˚C for 30 sec; with a final extension step at 70˚C for 5 min.

All experiments were performed at least three times. The representative results and corresponding quantification data of one repeat is shown for each experiment. Data are presented as the mean ± SEM and were compared using a Student's t-test or a one-way ANOVA with a post-hoc Tukey's test using GraphPad Prism version 5.01 (GraphPad software, Inc.). P<0.05 was considered to indicate a statistically significant difference.

To determine whether ET-1 and eNOS expression in HUVECs was affected by cilostazol at the mRNA level, the HUVECs were incubated overnight with TNF-α and then treated with different concentrations of cilostazol (1, 10 or 50 µM). Total RNA was isolated from HUVECs and subjected to RT-qPCR analysis. As shown in Fig. 2, HUVECs exposed to cilostazol exhibited upregulated eNOS mRNA levels and downregulated ET-1 mRNA levels in a dose-dependent manner (P<0.05).

HUVECs were pre-treated with a p38 inhibitor (SB203580-10 µM) for 2 h prior to incubation with cilostazol. The increase in ET-1 mRNA expression levels were fully abolished in the presence of this p38 inhibitor indicating the involvement of this kinase in cilostazol-induced regulation of ET-1 in HUVECs (P<0.05; Fig. 3A). Additionally, the effects of cilostazol on eNOS mRNA were also abolished by SB203580 (Fig. 3B).

Effect of cilostazol on p-p38 MAPK expression in HUVECs

Lysates from HUVECs treated with different cilostazol concentrations were analyzed by western blotting utilizing specific antibodies against the activated (i.e. phosphorylated) form of p38. Compared with the untreated cells, TNF-α markedly increased the p-p38 MAPK levels in HUVECs. Treatment of HUVECs with several different concentrations of cilostazol resulted in a decrease in p-p38 levels in a dose-dependent manner (Fig. 4).

To further validate the above findings, lysates from HUVECs exposed to p38 inhibitor (SB203580) and cilostazol were analyzed by western blotting. Compared with the untreated cells, TNF-α markedly increased the levels of and ET-1, and decreased the levels of eNOS in HUVECs. Cilostazol administration significantly decreased the protein expression levels of ET-1, and increased the protein expression levels of eNOS in HUVECs. These effects of cilostazol on ET-1 and eNOS were also abolished by SB203580 treatment (Fig. 5).

Endothelial dysfunction increases the vulnerability of plaque formation, triggers plaque rupture, and promotes thrombosis. It is considered a key precursor in the initiation, progression, and complication of coronary atherosclerotic heart disease (30,31). Given its role in the development of coronary artery and cerebrovascular diseases, endothelial dysfunction may be an attractive target in the efforts to optimize individualized therapeutic strategies to reduce cardiovascular morbidity and mortality rates (32).

Endothelial cells can release mediators and transcription factors to regulate important functions such as the tension of blood vessels and the growth of smooth muscle cells. Among those endothelial active factors, the relaxation factor NO and the contraction factor ET-1 are two leading active substances (5,33). Endothelial dysfunction is in part characterized by enhanced ET-1 and diminished eNOS expression (34). The balance between ET-1 and eNOS expression maintains the normal function of endothelial cells in terms of cellular integrity.

Cilostazol is a novel type of antiplatelet drug, which inhibits platelets by selectively inhibiting PDE3, and functions to expand blood vessels, inhibiting intimal hyperplasia and protecting the endothelium. Unlike other antiplatelet agents, cilostazol not only exhibits antiplatelet properties, but also appears to have beneficial effects on endothelial function (34-37). A number of studies suggested that cilostazol can induce NO production (15-17). Furthermore, it has been reported that cilostazol can decrease ET-1 production (18,19).

The MAPKs are a family of kinases that transduce signals from the cell membrane to the nucleus in response to a wide range of stimuli, including stress and injury. The MAPK pathway regulates cell proliferation, mitosis, transformation, apoptosis and other biological activities by affecting gene transcription and regulation. p38/MAPK is an important member of the MAPK family. There is a close relationship between the p38/MAPK signaling pathway and vascular remodeling. Recent studies have shown that the p38/MAPK signaling pathway is closely related to the regulation of ET-1 and eNOS expression (20,22). It has also been suggested that p38/MAPK is one of the targets of cilostazol, which may explain the beneficial effects of cilostazol in slowing down the progression of atherosclerosis (23,24).

In summary, we found that cilostazol regulates ET-1 and eNOS production by suppressing the p38/MAPK signal pathway in TNF-α-stimulated HUVECs, and this may contribute to the protective effect of cilostazol on the endothelium. Further experiments are required to confirm these results.

Funding: This study was supported by the Natural Science Foundation of China (grant no. 81803630).

YX and QL designed the study. YX, ZW and XL performed the experiments. YX analyzed the data and wrote the manuscript. All authors have read and approved the final manuscript. YX, XL and ZW confirmed the authenticity of all the raw data. 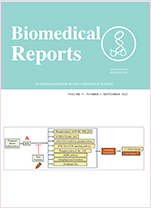