Hyaluronic acid (HA), also referred to as hyaluronan, is one of the most predominant glycosaminoglycans in the extracellular matrix (1). In 1934, Karl Meyer and John Palmer extracted HA from the vitreous fluid of the eye of a cow (2). ‘HA’, as it originated from hyalos (meaning glass in Greek), possessed two sugar molecules, one of them being uronic acid. Moreover, this linear polysaccharide exhibits numerous repeating disaccharide units (3). Notably, a healthy adult (weight, 70 kg) possesses ~15 g HA in the body (4). The majority of cells in the human body synthesize HA; thus, it may play a role in a variety of key biological processes. This evidence demonstrates the potential of HA as a therapeutic option (5).

At present, HA is used for the treatment of chronic inflammatory diseases. Notably, periodontal disease is an inflammatory disease involving the periodontium. The mineralized periodontal tissues of alveolar bone and cementum contain very little HA; however, it is necessitated by the extracellular matrix of the gingiva and the periodontal ligament (4). Wound healing is accelerated following treatment with HA, due to the subsequent impact on HA receptors, which play a role in cellular migration, angiogenesis and inflammation. HA relieves symptoms, both in the marginal gingiva and deeper periodontal tissues (6). This wound-healing characteristic of HA has also been used in different periodontal treatments, involving non-surgical and surgical therapy, and soft and hard tissue regeneration. Moreover, HA plays a crucial role in cell signaling and hemostasis, and manages the cell-matrix and cell-cell exchanges. HA also plays role in the inflow and outflow of nutrients and waste products (7). Notably, HA may be used in periodontal research due to the extensive scope of applications, which are summarized in the present review. No systemic search strategy was performed for the review. An online search was performed for studies, without a specific time frame, using key words (hyaluronic acid, periodontics, periodontal therapy, periodontal regeneration and wound healing) in combination.

HA plays a variety of roles in the body, leveraging physicochemical and biological properties. These biological functions vary from basic structural roles in the extracellular matrix to developmental regulation via effects on cell behaviour through tissue macro and microenvironment control. These functions of HA also exert direct receptor-mediated effects on gene expression (8,9). HA exhibits hygroscopic and viscoelastic properties. Hydrogen and adjacent carboxyl and N-acetyl group bonding occurs after HA is absorbed by an aqueous solution, allowing HA to maintain conformational rigidity through water retention (10). Through maintaining gaps and preserving surfaces, HA modifies the surrounding cellular and extracellular micro and macro environments. HA exhibits bacteriostatic activity, and this was demonstrated to be the highest when high concentrations of medium and lower molecular weight HA were used (11). HA is biocompatible and non-immunogenic in nature. Esterification and cross-linking are two modifications of HA that provide a gel-like structure and rigidity for cell seeding (12). In addition, HA exhibits anti-inflammatory properties. It performs scavenging actions, through the clearing of prostaglandins, metalloproteinases and other bioactive molecules (12). HA also exhibits antioedematous properties associated with osmotic action (13), and antioxidant properties. HA scavenges reactive oxygen species; thus, stabilizing the granulation tissue matrix (14).

HA is a negatively charged glycosaminoglycan that differs from other glycosaminoglycans. HA synthesis occurs in the cellular plasma membrane in mammals, whereas glycosaminoglycan synthesis often occurs in the Golgi apparatus. Moreover, HA synthesis occurs via three hyaluronan synthase isoenzymes (HAS1, 2 and 3) (7). HA exhibits a high molecular weight of 103-104 kDa, a length of 2-25 µm, and it does not contain any sulphate groups (8). The synovial fluid, epidermis, umbilical cord and other tissues exhibit the highest concentrations of HA, while the blood serum exhibits the lowest concentration (15). A membrane-bound protein present in plasma membranes produces HA through the transportation of activated monosaccharides to glycosaminoglycan chains, and the release of uridine diphosphate, secreted directly into the extracellular space. Lymphatic drainage into the circulatory system or local metabolism causes HA turnover in tissues. Depending on its removal, HA exhibits a tissue half-life ranging from 12 h to 2-3 days (16).

4. Role of HA in wound healing

HA plays a role in numerous physiological and biological processes, serving as a structural component of cartilage and other tissues. To produce proteoglycans, HA interacts with proteins rich in numerous forms of glycosaminoglycans. It increases inflammatory cell and extracellular matrix infiltration, assisting inflammation. Thus, HA exhibits the potential to impact cellular behaviour via influencing the environment surrounding cells (16). HA is engaged in numerous cell functions which increase tissue healing, such as cell proliferation, locomotion and recognition. This makes HA increasingly susceptible to colonization by tissue repair cells (17). In its highly purified form, HA has been used in medicine for a number of years, due to its physiochemical characteristics and non-immunogenicity. As HA retains water in large amounts, it affects and improves tissue regeneration; thus, preventing the production of scabs and scars (18,19). It has been proposed that HA stimulates angiogenesis, leading to increased levels of wound healing in the bone matrix. At a low molecular weight, HA is angiogenic, whereas at a high molecular weight, HA is anti-angiogenic (20). High molecular weight HA enhances osteo-induction or bone production during wound healing (21). Results of previous studies demonstrated that exogenous HA exerted satisfying wound healing benefits (22-24). In cosmetic dermatology, HA is also used as a dermal filler (25). As it forms an integral part of cell migration, organogenesis and development, HA exhibits potential in tissue engineering (26). The esterification and crosslinking of HA are two modifications that provide the gel-like structure and rigidity for cell seeding. These biopolymers are biodegradable which help fibroblasts, chondrocytes and mesenchymal stem cells to proliferate (27). HA has been employed as a chemotherapeutic agent in the treatment of gingivitis. Moreover, osseointegration of dental implants indicates the involvement of HA (28). As HA exhibits bone induction properties, it may exhibit potential as a biomaterial scaffold in guided bone regeneration and tissue engineering (29). In 2022, Ibraheem et al (30) demonstrated improved wound healing in extraction socket wounds following treatment with HA. Moreover, HA exhibited dose-dependent bacteriostatic effects on a range of microorganisms in the planktonic phase (31).

Hylauronan generates cell responses via interaction with cell receptors. Notably, there are numerous different cell receptors involved in HA signaling. The most common receptor involved in HA signaling is CD44(32). CD44 signaling plays a crucial role in wound healing, as CD44 in fibroblasts is required for emigration into the affected region (33). Notably, receptor for hyaluronan-mediated motility (RHAMM), also known as CD168, plays a key role in signaling. RHAMM-hyaluronan interactions are vital for tissue repair and inflammation (34). In addition, hyaluronan receptor for endocystosis is involved in hyaluronan endocysotsis, and lymphatic vessel endothelial hyaluronan receptor 1 plays a role in the regulation of tissue hydration and other biochemical properties, via the absorption of HA in the lymphatic system (35,36).

5. Role of HA and overview of studies in periodontal therapy

HA is located in the periodontium in differing amounts. There are higher levels in the gingiva and periodontal ligament, compared with the cementum and alveolar bone. Moreover, high amounts of HA in the circulatory blood serum represent a serum overload factor of gingival crevicular fluid (40).

Scaling and root planing (SRP) exerts a positive effect on periodontal parameters, as it decreases the pathogens present in the periodontal pocket and alters the microflora to be less pathogenic (41). Results of previous studies investigating SRP combined with non-mechanical therapy demonstrated that the use of local or systemic antibacterial medicines further improved clinical parameters (42,43). However, systemic antibiotics should not be utilized to treat all types of periodontitis. Limiting the use of systemic antibiotics is vital as the development of resistance and unwarranted drug interactions may occur. In patients with gingivitis and chronic periodontitis, HA is utilized as an adjuvant therapy following SRP. Treatment with HA results in a reduction in prostaglandins, metalloproteinases and bioactive materials. This results in the impediment of tissue destruction; thus, promoting healing (44).

Improvements have been observed in healing, periodontal indices and clinical attachment level (CAL) following treatment with HA. In a split-mouth study, Al-Shammari et al (49) evaluated the effects of SRP + HA and SRP alone in patients with chronic periodontitis. Improvements in gingival indices, CAL and PPD were observed following 6 and 12 weeks in the test group (49). In addition, Madkour et al (50) assessed the effects of HA in patients with chronic periodontitis under medication. Comparable with the results obtained by Al-Shammari et al (49), the levels of gingival indices, PPD and CAL were improved in both groups, but these levels were most improved in the SRP + HA group (50). Eliezer et al (51) also conducted a systematic review, which demonstrated that HA offers beneficial effects in pocket depth reduction, CAL gain and reduction in bleeding on probing during both surgical and non-surgical periodontal therapy.

HA improved CAL and boosted keratinization. Treatment with injectable HA gel of various doses led to improvements in papillary regeneration, as HA promotes neovascularization (52). Çankaya and Tamam compared the interdental papillary fill after HA was injected into the maxillary and mandibular jaws. The injection was delivered until the color of the gingiva changed to white. After 3, 12 and 24 months, the interdental area demonstrated 54.21, 73.22 and 79.35% coverage remaining in the maxilla, and 57.24, 71.40 and 78.71% coverage remaining in the mandible, respectively (52). Hyaluronan promotes fibroblast attachment to the cementum, while also acting as an antibacterial agent. Moreover, sodium hyaluronate enhances chemical signaling between cells. As a result, sodium hyaluronate is often used in the guided tissue regeneration membrane (GTR) (53). Notably, Vanden Bogaerde (54) examined the clinical effectiveness of esterified HA fibers in the treatment of 18 periodontal defects. The mean PPD was decreased by 5.8 mm after a follow-up of 12 months, and the CAL increase was 2.8 mm (54). In a histological examination in experimental animals, novel alveolar bone growth was observed in bone lesions (55). In 2022, a systemic review by Rodríguez-Aranda et al (56) also demonstrated favourable results with HA in periodontal regeneration. This systemic review revealed improvements in terms of CAL, PPD, BOP, and radiographic parameters, when HA was used alone or in combination with bone graft or other biomaterials (56).

Collectively, the results of previous studies have demonstrated the effective use of HA in periodontal therapy. An overview of studies using HA as a periodontal therapeutic intervention with different sample sizes and HA forms are presented in Table I (49,57-69).

HA is a vital biomaterial used in periodontal therapy. Treatment with HA leads to clinical improvement in patients with gingivitis, periodontitis, implants and periodontal defects. Treatment with HA accelerates wound healing, resulting in improved postoperative results and high levels of patient comfort. However, further research into the therapeutic effects of HA in periodontal disease is required. This will further determine the specific uses, the optimal administration of HA for the postoperative treatment of periodontal conditions and the potential for complete periodontal tissue regeneration. 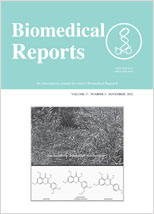