Accuracy of point‑of‑care ultrasonography in the diagnosis of necrotizing fasciitis: A case report

Necrotizing fasciitis is a serious infectious condition that may compromise the patient's life. In the present case study, a 42‑year‑old male patient was reported. The condition manifested as the presence of subjective fever, general malaise, myalgia, non‑productive cough, dysphagia and neck pain ~1 week prior to hospital admission. Vascular dissection was considered as the initial diagnostic suspicion, and thus, angiotomography of neck vessels was performed, ruling out aortic and neck vessel dissection. Radiology indicated negativity for aortic syndrome and cervical vascular disease, but the presence of cervical‑mediastinal edema, lamellar fluid between muscular and fatty planes and posterior pulmonary atelectasis, absence of pleural fluid or consolidations, and tonsillar hypertrophy without abscesses. Due to the rapid evolution of the condition, the presence of dyspnea with the need for supplemental oxygen, and the disproportion between the intensity of the pain described by the patient and the external findings observed, the presence of necrotizing fasciitis was considered. Point‑of‑care ultrasonography was performed, indicating a cobblestone pattern of the subcutaneous cellular tissue, with diffuse thickening of the anterior cervical fascia and increased echogenicity with soft tissue edema posterior to the fascia. Magnetic resonance imaging confirmed the inflammatory findings in the fascia and other cervical soft tissues, without exhibiting any signs of necrosis, but with the presence of abscesses in the visceral and carotid space.
View Figures 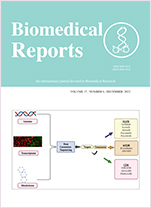