As pulmonary fibrosis (PF), a severe interstitial pulmonary disease, has such a poor prognosis, the development of prevention and treatment methods is imperative. (−)‑Epigallocatechin‑3‑O‑gallate (EGCG), one of the major catechins in green tea, exerts an antifibrotic effect, although its mechanism remains unclear. Recently, it has been reported that microRNAs (miRNAs or miRs) transported by extracellular vesicles (EVs) from vascular endothelial cells (VECs) are involved in PF. In the present study, the effects of EGCG on the expression of miRNAs in EVs derived from human umbilical vein endothelial cells (HUVECs) were assessed and miRNAs with antifibrotic activity were identified. miRNA microarray analysis revealed that EGCG modulated the expression levels of 31 miRNAs (a total of 27 miRNAs were upregulated, and 4 miRNAs were downregulated.) in EVs from HUVECs. Furthermore, TargetScan analysis indicated that miR‑6757‑3p in particular, which exhibited the highest degree of change, may target transforming growth factor‑β (TGF‑β) receptor 1 (TGFBR1). To evaluate the effects of miR‑6757‑3p on TGFBR1 expression, human fetal lung fibroblasts (HFL‑1) were transfected with an miR‑6757‑3p mimic. The results demonstrated that the miR‑6757‑3p mimic downregulated the expression of TGFBR1 as well the expression levels of fibrosis‑related genes including fibronectin and α‑smooth muscle actin in TGF‑β‑treated HFL‑1 cells. In summary, EGCG upregulated the expression levels of miR‑6757‑3p, which may target TGFBR1 and downregulate fibrosis‑related genes, in EVs derived from VECs. 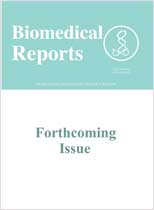