Gastric cancer is a major public health problem. It is the fourth most common cancer worldwide, with 603,000 new cases among men and 330,000 among women annually. Gastric cancer is the second leading cause of cancer-related mortality, with 700,000 deaths per year worldwide (1,2). Although surgical resection remains the primary treatment option, a substantial proportion of patients with gastric cancer who have undergone curative surgery develops disease recurrence. Overall survival outcomes remain unsatisfactory, although histopathological features such as depth of invasion of the primary tumor and lymph node involvement used as prognostic factors have improved survival rates. Numerous studies have attempted to determine the optimal method to estimate gastric cancer prognosis using molecular markers (3,4).

Chemokines and their receptors, particularly stromal cell-derived factor (SDF)-1α and CXC chemokine receptor 4 (CXCR4), have been shown to impact cancer progression. CXCR4 is a key receptor in the crosstalk between tumor cells and their microenvironment. Mesenchymal or marrow-derived stromal cells, which constitute a large proportion of the non-neoplastic cells within the tumor microenvironment, secrete SDF-1α (5,6). SDF-1α is also produced by various types of tumor cells and may act in an autocrine and paracrine manner (7–9). The pattern of CXCR4 expression in tumor cells has a critical role in determining the site of metastatic spread, as cancer cells that express CXCR4 are attracted to organs in which SDF-1α is secreted (10). SDF-1α induces proliferation, invasion and survival of cancer cells, and promotes tumor angiogenesis (11–13). Thus, CXCR4 and SDF-1α expression is associated with disease progression and consequently could serve as a prognostic marker in various cancer types (14–16).

This study used tissue samples from 221 patients undergoing elective surgery for gastric cancer at Chungnam National University Hospital, Daejeon, Korea, between 2000 and 2003. All patients had participated in our previous study which investigated the impact of CXCR4 expression on gastric cancer progression (21). Data from this previous study are discussed here for the purpose of combined analysis of SDF-1α and CXCR4 expression. The patient population included 155 men and 66 women, ranging in age from 29 to 86 years (mean, 58.6). Patients had histologically confirmed adenocarcinoma; clinicopathological features were assessed using the general guidelines established by the Japanese Gastric Cancer Association (23). No patients had received preoperative chemotherapy. All protocols were approved by the institutional review board.

Immunohistochemical staining was performed using monoclonal anti-SDF-1α antibodies (MAB350; R&D Systems, Minneapolis, MN) and the Envision-HRP detection system (DakoCytomation, Carpinteria, CA) according to the manufacturers' protocols. Sections (3 μm) were cut from gastric cancer tissue microarray blocks, mounted on slides treated with APES (Sigma Chemical Co., St. Louis, MO), and dried for 2 h at 56˚C before staining. Briefly, the sections were deparaffinized in xylene and rehydrated in graded alcohol. After antigen retrieval by heating with citrate buffer (pH 6.0) in a pressure cooker at full power for 3 min, tissue sections were treated with 3% hydrogen peroxide for 10 min to block endogenous peroxidases. The sections were then incubated for 30 min in a humid chamber at room temperature with the anti-SDF-1α antibody (1:50) diluted with background reducing diluent (S0809; DakoCytomation). Slides were then incubated with Envision reagent for 30 min, followed by 3,3′-diamino-benzidine (DAB) chromogen for 5 min, counterstained with Mayer's hematoxylin and mounted. Exclusion of the primary antibody during immunostaining was used as a negative control, while lymphocytes of normal spleen sections served as a positive control. Immunostaining was evaluated independently by two authors (S.M.H., J.M.K.) who were blinded to the patient outcomes and clinicopathological findings. Immunohistochemical staining was scored according to intensity, and tumors were classified according to four grades based on staining intensity (grade 0, no staining intensity; grade 1, weak staining intensity; grade 2, moderate staining intensity; grade 3, strong staining intensity). In the case of heterogeneous sample staining, the higher score was chosen when more than 50% of the cells showed greater staining intensity. Relative expression of SDF-1α was indicated by its staining intensity (i.e., strong staining indicated high SDF-1α expression and vice versa), as in our previous report in which we used the same defining system for CXCR4 (21).

The association of SDF-1α and CXCR4 expression with clinicopathologic features was assessed using the χ2 test and Student's t-test. Survival rates were determined using Kaplan-Meier curves, and P-values were determined by the log-rank test, with P<0.05 considered to be statistically significant. All statistical analyses were conducted using SPSS 13.0 (SPSS, Chicago, IL).

Clinicopathological features of the gastric cancer patients according to SDF-1α expression.

Clinicopathological features of the gastric cancer patients according to CXCR4/SDF-1α expression.

The present study has some limitations. As the determination of CXCR4 and SDF-1α expression was dependent solely on immunohistochemistry, the possibility exists of errors due to diagnostic inaccuracy. To obtain more accurate results, several other methods such as Western blotting, quantitative mRNA expression, or gene expression profiling should be considered simultaneously. Also, all clinicopathological data were collected retrospectively. Accordingly, a well-planned prospective study incorporating multiple validating techniques such as Western blotting is warranted in the future. In conclusion, CXCR4 and SDF-1α expression may reflect the prognosis of patients with gastric cancer, such that a combination of high CXCR4 and high SDF-1α expression suggests a dismal prognosis. 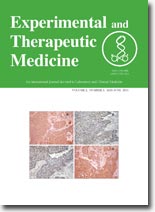