The aim of this study was to evaluate the efficacy and safety of polyethylene glycol 4000 (PEG 4000) for the treatment of constipation in children over 8 years of age. A total of 216 children from 7 hospitals were enrolled. A total of 105 patients received oral PEG 4000 (20 g/day) and 111 patients received oral lactulose (15 ml/day) for 2 weeks. The stool frequency, stool consistency and abdominal pain of the patients were monitored. In the PEG group, following one week and two weeks of treatment, the median weekly stool frequency improved from 2 times prior to treatment to 6 and 7 times, respectively, following treatment. The clinical remission rates of the PEG and lactulose groups following one week of treatment were 70.48 and 39.64%, respectively, and following two weeks of treatment were 72.38 and 41.44%, respectively. Abdominal pain disappeared in 74.6% of patients following two weeks of PEG 4000 treatment. No significant clinical adverse effects or abnormalities in the laboratory tests were observed in the two treatment groups. In conclusion, PEG 4000 is a safe and more effective drug compared to lactulose for the treatment of constipation in children.

Constipation is a common digestive disease in children, which accounts for 3–5% of general pediatric visits and up to 25% of children with gastroenterological disorders (1). Constipation in children is presented as a decrease in stool frequency, firm or hard stools, difficult and painful defecation and voluntary stool retention. Constipation affects the emotion, appetite and quality of life of afflicted children. Conventional treatments for constipation include bowel habit training, intake of fiber-enriched food, increased drinking of water and physical exercise, and the use of various laxatives and stool softeners (2). Polyethylene glycol 4000 (PEG 4000, Forlax) is a non-toxic, hydrosoluble, high-molecular polymer, which is not absorbed in the gastrointestinal tract following oral administration. PEG 4000 acts as an osmotic agent that increases fecal water content. A number of clinical studies have demonstrated that PEG 4000 is effective in the treatment of constipation in adults and children (3–7). In order to investigate the application of PEG 4000 in Chinese children, we conducted a multicenter study involving 216 children (8–18 years of age) suffering from constipation from 7 hospitals in China. This study aimed to investigate the efficacy and safety of PEG 4000 treatment compared to that of lactulose treatment.

Patients were selected from 227 children (8–18 years of age) who visited pediatric clinics with symptoms of constipation at the 7 participating hospitals in China from July 2004 to March 2005. Subjects were selected based on: i) symptoms which consisted of weekly stool frequency of 2 or less and stool consistency type 1–3 (Bristol Stool Scale) for at least 2 weeks; ii) no presence of organic or systemic disease; iii) no initiation of any treatment for constipation or administration of drugs affecting gastrointestinal movements; iv) obtainment of informed consent by patients and parents or guardians. The procedures were approved by the Ethics Committee for Research and Education of the Fourth Military Medical University, Xi’an, China. Among the 227 patients, 11 cases were excluded due to lack of medical records. A total of 216 subjects of either gender were randomly assigned into two groups. The PEG 4000 treatment group consisted of 105 cases and the control lactulose treatment group consisted of 111 cases.

Patients in the PEG 4000 treatment group received 20 g of PEG 4000 dissolved in a glass of water or drink each morning before breakfast for two weeks. Patients in the lactulose treatment group received 15 ml of lactulose (10 g) oral solution (Duphlac) per day after breakfast for the first 3 days, and then 10 ml (6.7 g) per day for the following 11 days.

A blind randomized study design was adopted to reduce possible deviation in the statistical testing. First, a biostatistician constructed random digit tables using statistical software SAS v8.2. Then PEG 4000 and lactulose were digitally labeled. The researchers in each study center received corresponding drugs from drug administrators according to the patient sequence.

Assessment of the treatments

The efficacy and safety of the PEG 4000 treatment were compared with the lactulose treatment according to the following primary and secondary parameters.

The examined primary efficacy parameters included weekly stool frequency and stool consistency. The stool consistency was classified into types according to the Bristol Stool Scale: 1, separate hard lumps; 2, sausage-shaped, but lumpy; 3, like a sausage but with cracks; 4, like sausage or snake, smooth and soft; 5, soft blobs with clear-cut edges; 6, fluffy pieces with ragged edges, a mushy stool; 7, watery without solid pieces.

The examined secondary efficacy parameters included the remission rate of abdominal pain and the rate of clinical remission. Clinical remission was achieved when the weekly stool frequency became >3 and stool consistency was normalized (Bristol type 4–6).

The clinical remission rates and remission rates of abdominal pain were compared between the two group by using χ2 tests. Using descriptive statistics, a safety evaluation was made according to results from laboratory tests, physical examinations, vital signs and adverse events.

As shown in Table I, there were no significant differences in the gender, age, weight and height of the patients between the PEG 4000 and the lactulose group.

Comparison of the study population.

Effect of PEG 4000 and lactulose on secondary efficacy parameters

Serum concentrations of sodium, potassium, calcium and glucose were measured, and full blood counts, urine tests and blood tests for renal and liver function were performed before and after treatment. All patients in the study demonstrated normal results in the above tests before and after treatment, except one patient in the lactulose group who had a slightly increased level of AST (58 units/l). However, due to loss of contact following the two weeks of treatment, the liver function test on this patient was not followed up.

Children with chronic constipation often receive long-term laxative treatment. Thus, a safe, effective and non-stimulant laxative is preferred. PEG 4000 is tasteless, non-toxic, hydrosoluble, non-absorbable and is not metabolized by colonic bacteria. It acts as a pure osmotic agent that adds moisture to stools to produce ‘hypocatharsis’. With the addition of favorable flavors, it is palatable and increases children compliance with the treatment. Lactulose is a synthetic disaccharide, which is non-absorbable, but is metabolized by colonic bacteria to produce gas, resulting in abdominal discomfort. Lactulose is well known as an effective laxative for the treatment of constipation in adults and children (8). PEG 4000 was first registered for clinical trials in China in 2003. The present study aimed to evaluate the safety and efficacy of PEG 4000 treatment compared to lactulose for the constipation of Chinese children over 8 years of age.

No significant clinical adverse effects or abnormalities in the laboratory tests were observed in the two treatment groups. The main adverse effects of PEG 4000 and lactulose were diarrhea, abdominal pain and abdominal distention. As PEG 4000 is not absorbed in the gastrointestinal tract it may not have systematic toxicity following oral administration. Thus, PEG 4000 is safe for the treatment of constipation in children (9,10).

In this study, we observed that each gram of PEG 4000 could retain 2.7 g of water (by means of hydrogen bonding). This feature of PEG 4000 leads to an increase in fecal water content, thus it acts as a stool softener facilitating defecation. Soft feces could be formed 24–48 h following treatment. A large number of children with constipation returned to normal defecation following 5 days of treatment. The majority of patients recovered from constipation following 2 to 3 weeks of therapy.

The authors express their gratitude to Dr Michael Nowicki (University of Mississippi Medical Center, MS, USA) for his critiques, valuable suggestions and help in preparing the manuscript. This work was supported by the National Natural Science Foundation of China (30800417, 81170331). 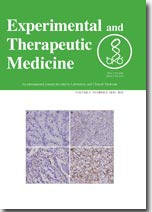