Emodin, an anthraquinone derivative isolated mainly from the root and rhizome of the medicinal plant Rheum palmatum L., was found to exert anticancer effects on various cultured cancer cells. Phosphatase of regenerating liver-3 (PRL-3), a novel gene, has been known to play an important role in the promotion of cellular proliferation as well as inhibition of apoptosis in cancer cells. However, there is relatively little information in the published literature with regard to the anticancer mechanism of emodin, and whether emodin is involved in the regulation of PRL-3 in human gastric carcinoma cells is not known. In the present study, we investigated the effects of emodin on SGC-7901 cell proliferation, apoptosis and regulation of PRL-3. The results showed that the proliferation of SGC-7901 cells was inhibited by emodin in a time- and concentration-dependent manner. The results also showed that early apoptosis rates increased in a concentration-dependent manner after emodin treatment. Furthermore, real-time quantitative PCR analysis showed that PRL-3 mRNA was significantly decreased by treatment with emodin. Western blotting showed that PRL-3 protein expression was also downregulated significantly. Overall, the present study demonstrated that emodin inhibited cell growth and induced apoptotic cell death in the SGC-7901 human gastric carcinoma cell line. Downregulation of PRL-3 is involved in the inhibition of proliferation and apoptosis induced by emodin. PRL-3 may be a new potential therapeutic target for gastric cancer using emodin. 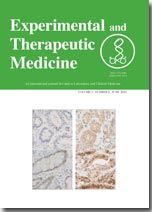