Alzheimer’s disease (AD) is the most common form of dementia. Currently, there is no cure for the disease, which worsens as it progresses and eventually leads to mortality. The cause of the majority of Alzheimer’s cases remains unknown. The most significant hypothesis attempting to explain the cause of the disease is the cholinergic hypothesis (1), which proposes that AD is caused by reduced synthesis of the neurotransmitter acetylcholine.

Acetylcholinesterase inhibitors (AChEIs), including tacrine, rivastigmine, galantamine and donepezil, are currently used to treat the cognitive manifestations of AD (2). However, AChEIs may cause a broad spectrum of adverse events in the gastrointestinal system, including nausea, vomiting and diarrhea (3,4). These side-effects arise in ∼10–20% of users and are mild to moderate in severity. These adverse events, which force a number of patients to stop taking AChEI agents, are generally recognized to be a result of parasympathetic nervous system activity. AChEIs ameliorate dementia by inhibiting acetylcholinesterase (AChE) in the central nervous system (5,6).

The AChEI huperzine A, an alkaloid isolated from Huperzia serrata, has been used in the treatment of the cognitive deterioration associated with AD in China (7). It also results in nausea, vomiting and diarrhea, similar to other AChEIs. To date, it is not known how quickly these side-effects become tolerated. The present study aimed to observe the effects of huperzine A on gastrointestinal motility and AChE activity in mice, following varying periods of administration, to provide guidance to doctors on how to use huperzine A so as to attenuate adverse events.

Male Swiss mice weighing 20±2 g were obtained from the Experimental Animal Center of Luye Pharmaceutical Company (Shandong, China). All experimental procedures carried out in this study were performed in accordance with the guidelines for the care and use of laboratory animals of Yantai University and were approved by the Ethics Committee of the university. All mice were housed in diurnal lighting conditions (12 h/12 h) and allowed free access to food and water.

Following the gastrointestinal motility test, the brain, stomach and duodenum of mice in each group were separated on ice and homogenized with ice-cold saline to form a 10% (w/v) homogenate. AChE activity was determined based on the methods of Ellman et al(8). Briefly, a reaction mixture containing 955 μl sodium phosphate (0.1 M, pH 7.4), 25 μl 5,5′-dithiobis(2-nitrobenzoic acid) (DTNB; final concentration, 0.5 mM) and 10 μl homogenate was incubated for 5 min at 37°C, then 10 μl 0.1 M acetylcholine iodide (final concentration, 1 mM) was added. After incubation for 15 min at 37°C, the absorbance was measured at 412 nm at room temperature. AChE activity was expressed as U/g protein.

Data were analyzed using one-way analysis of variance (ANOVA) with Bonferroni post hoc test for multiple t-tests. A value of P<0.05 was considered to indicate a statistically significant difference. All data in this study were expressed as mean ± standard deviation.

Effects of huperzine A on gastrointestinal motility

Following a single dose of huperzine A, AChE activity in the stomach and duodenum was significantly inhibited; however, following the administration of multiple doses (7 or 28 doses, one dose per day), no significant differences in AChE activity were observed compared with those in the Lop group (Fig. 2).

Effects of huperzine A on AChE activity in the brain

Following single- or multiple-dose administration of huperzine A, the AChE activities in the brains of the mice were significantly inhibited compared with that in the Lop group (Fig. 3).

AChEIs have been approved for the symptomatic treatment of AD for approximately twenty years. However, the side-effects associated with increased cholinergic activity, particularly in the gastrointestinal system, prevent patients from receiving effective doses of the drug. In addition, the advanced age and frail nature of many patients with AD mean that poor tolerability is a serious concern.

In the present study we investigated gastrointestinal motility and AChE activity in the stomach and duodenum following single- and multiple-dose oral administration of huperzine A at therapeutic doses in mice (14,15).

This study was supported by the Taishan Scholar Project, a project of Shandong Province Higher Educational Science and Technology Program (grant no. J10LF76) and the Foundation for Outstanding Middle-aged and Young Scientists (grant no. BS2011YY061). 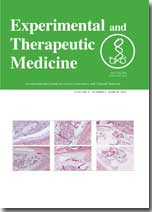