ARDS is a common and major inflammatory lung disease, characterized by rapid progression. It is estimated that there are 190,000 newly diagnosed cases of ALI in the United States alone each year, 75,000 of whom die annually (3). In China, the incidence of ALI/ARDS is higher, with mortality rate as high as 52% (2). In recent years, it has been noted that miRNAs play an important role in multiple biological processes and signal transduction pathways of ALI/ARDS (4).

The expression changes of miRNAs are associated with immune response, inflammatory signaling pathways and pathogenesis of inflammatory lung diseases, including ALI, hence, miRNAs can be considered as new therapeutic target (4). Although miRNAs change the expression of related genes moderately, it may greatly affect the expression of a large number of downstream genes, thereby influencing a variety of biological processes. Therefore, miRNAs might be potentially used as one of the markers (5,6).

Toll-like receptor (TLR) family serves both as signal molecules and receptors of lipopolysaccharide (LPS) (7). TLR4, a member of TLR family, is mainly distributed on the surface of mononuclear macrophage, which mediates the intracellular conduction of LPS inflammation signals, and is the preferential receptor of LPS (8). Nuclear factor (NF)-κB collectively refers to many DNA binding proteins which specifically bind to κB site of promoters of a variety of genes, and promotes transcription, which plays an important role in immune response, inflammatory response and cell growth regulation (7). NF-κB signal pathway is the most important downstream pathway among all signal transduction pathways mediated by LPS, suggesting that TLR4/NF-κB pathway may be the key target to trigger inflammatory response and organ injury (9). Zhang and Xu (10) has indicated that miRNA-140-5p regulates hypoxia-mediated human pulmonary artery smooth muscle cell proliferation. Herein, the aim of the present study was to investigate the function of miRNA-140-5p in ts ALI and its regulatory mechanism.

miRNA-140-5p mimic and mimic control (mimic-NC) were purchased from Sangon Biotech Co., Ltd. (Shanghai, China). A549 cell was co-transfected with 20 nM miRNA-140-5p mimic and mimic control (mimic-NC) using Lipofectamine 3000 (Invitrogen, Guangzhou, China). After transfection for 4 h, old medium was removed and new medium was added into cell. After transfection for 48 h, A549 cell was treated by 100 ng/ml of LPS for 4 h, and then analyzed other study.

Cell was washed with PBS and fixed with 4% paraformaldehyde for 15 min, and blocked with 0.5 ml PBS containing 0.1% Triton X-100 and 1% BSA at room temperature for 1 h. Cell were incubated with TLR4 (Santa Cruz Biotechnology, Inc.) at 4°C over-night. Cell were then washed with PBS and incubated with Alexa 555 labelled Rabbit Anti-Goat secondary antibody (Santa Cruz Biotechnology, Inc.) in the dark for 1 h at room temperature and stained with DAPI for 15 min in the dark. Images cells were obtained by using a phase fluorescence microscope (Axio Observer; Carl Zeiss AG).

miR-140-5p expression in mice with ALI

miR-140-5p regulated inflammation in in vitro model of ALI

ALI and ARDS are acute respiratory distress syndromes caused by pulmonary capillary diffuse injury and enhanced permeability due to internal and external factors, mainly characterized by pulmonary edema, hyalinosis and atelectasis, with respiratory distress and refractory hypoxemia as clinical features (3). Internal pulmonary factors include direct injury to the lung, such as injury by stomach contents, lung injury, radiation injury, severe pneumonia, etc. External pulmonary factors consist of severe shock, endotoxemia, severe non-thoracic trauma, large area burns, large blood transfusion, acute pancreatitis and drug poisoning (12). In spite of recent great progress concerning the studies on ALI/ARDS, there is still a lack of effective clinical treatments in addition to protective mechanical ventilation (13). Therefore, it is urgent to explore a novel therapeutic strategy to alleviate ALI/ARDS (13). To the best of our knowledge, this is the first report demonstrating the suppressive expression of miR-140-5p in mice with ALI, compared with normal control group. Nagy et al (14) has showed that miR-140-5p regulates inflammation in cystic fibrosis.

At present, researches concerning the relationship between ALI/ARDS and miRNAs are still in early stage, and the study on human lung tissues and organs will provide direct and reliable evidence about the role of miRNA in ALI/ARDS (5). Our study showed that down-regulation of miR-140-5p significantly induced the levels of TNF-α, IL-1β, IL-6 and MPO in ALI in vitro. Li et al (15) reported that miR-140-5p inhibited inflammatory cytokines secretion through targeting TLR4.

ALI, a kind of severe lung infectious disease, is mainly caused by bacterial infection-induced sepsis. LPS, the main component of the cell wall of gram negative bacteria, is the major pathogenic factor of ALI (9). LPS interacts with the receptor on the effector cell membrane to initiate an intracellular signal transduction system, which causes the activation of nuclear transcription factor NF-κB, to initiate gene transcription and to produce a variety of proinflammatory cytokines. TLR4 is considered to be an important receptor mediating LPS signal transduction (16). MyD88, a key adaptor molecule in TLR4 signaling pathway, plays an important role in the transmission of upstream signaling as well as the incidence and progression of diseases (17). TLR4-mediated MyD88 signal pathway regulates the expression of multiple genes related to inflammation during immune response to pathogen invasion (18). Consistent with this finding, our studies showed that over-expression of miR-140-5p significantly suppressed TLR4/MyD88/NF-κB signaling pathway in in vitro model of ALI. Sun et al (19) suggest that miR-140-5p mediated the inflammation of human dental pulp stem cells through TLR4 signaling pathway.

NF-κB, one of the downstream molecules of TLR4, is a heterodimer composed of p65 and p50 subunits (20). In the inactive state, NF-κB binds to inhibitive protein IκB and exists in the cytoplasm in an inactive form (21). Some studies have showed that in microglia, LPS activates TLR4, releases the inhibition of NF-κB by IκB, promotes NF-κB nuclear translocation, and stimulates the expression of genes related to inflammation, thereby promoting the synthesis and release of IL-1 and TNF-α (21,22). We found that the inhibition of TLR4 using TLR4 inhibitor or NF-κB inhibitor reduced the proinflammation of miR-140-5p in ALI in vitro through TLR4/MyD88/ NF-κB signaling pathway. Jude et al (23) indicated that miR-140-3p regulated TNF-α-induced CD38 expression in human airway smooth muscle cells through regulating the protein expression of p38 MAPK and NF-κB.

Results from our current study suggest that miR-140-5p inhibits the inflammation of ALI via TLR4/MyD88/ NF-κB signaling pathway. Our findings may provide a novel strategy of miR-140-5p for the treatment of ALI and protection against inflammation in further clinical research.

The analyzed data sets generated during the study are available from the corresponding author on reasonable request.

The experimental procedures conformed to the Guide for the Care and Use of Laboratory Animals, and all of the procedures were approved by the Institutional Ethics Committee of Sichuan Cancer Hospital (Sichuan, China). 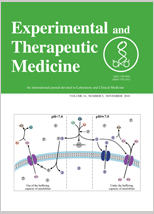