Breast cancer was the second leading cause of cancer-related mortality (17-20%) in women worldwide in 2019(1). Based on the sensitivity to different treatments, prognosis and clinicopathological characteristics, breast cancer can be divided into several subtypes (2,3). According to the expression levels of estrogen receptor (ER), progesterone receptor (PR), human epidermal growth factor receptor (HER) 2 (HER2) and Ki67 (a proliferation index marker), various molecular subtypes of breast cancer have been identified, including luminal A-like, luminal B-like, HER2-positive, basal-like (mainly triple-negative) and normal breast-like (4,5). Among these subtypes, luminal A tumors are defined as ER-positive, PR >20%, HER2-negative and Ki67 <14% (6,7).

The accumulation of multiple mutations results in tumorigenesis, including tumor suppressor gene inactivation and oncogene activation (16). The inactivation of tumor suppressor genes is considered to play an important role in the occurrence of cancer. As the first member of the BTG/transducer of ERBB2 gene family, BTG2 has two highly conserved domains (BTG boxes A and B), which are separated by 20-25 non-conserved amino acids (17-19). As a novel tumor suppressor in malignancies, BTG2 is associated with numerous cellular functions, such as cell proliferation, apoptosis and DNA damage repair (20-23). In pancreatic cancer, microRNA (miR)-27a silencing has been indicated to inhibit cell proliferation and invasion, and promote apoptosis through the elevation of BTG2(24). In non-small-cell lung cancer, the downregulation of nucleolar and spindle-associated protein 1 or LINC01234 inhibits cell growth, migration and invasion by increasing the expression of BTG2 (25,26). In human muscle-invasive bladder cancers, BTG2 also suppresses muscle invasion via inhibition of DNA methyltransferase 1(27). In ER-positive breast cancer, downregulation of BTG2 is associated with overexpression of cyclin D1 protein and with increased tumor grade and size (28). In addition, BTG2 inhibits the expression of HER ligands and serves an essential role in the endocrine (tamoxifen) resistance of ER-positive tumors (29). Thus, the suppression or absence of BTG2 promotes the progression of triple-negative breast cancer. However, to the best of our knowledge, studies on the function of BTG2 in luminal A-subtype breast cancer and its association with these cell processes have not been conducted to date.

The present study aimed to investigate the function of BTG2 in luminal A-subtype breast cancer using the MCF-7 cell line due to its positive expression of ER and PR and negative expression of HER (30,31). MTT, Transwell invasion and wound healing assays were applied to investigate the function of BTG2 on MCF-7 cell proliferation, migration and invasion. Finally, the mRNA and protein level of BTG2 was also confirmed in luminal A breast tumor tissue.

A PPI network was constructed using the Search Tool for the Retrieval of Interacting Genes/Proteins (STRING; https://string-db.org/) and Cytoscape software 3.6.1 (www.cytoscape.org). Hub genes were identified from the PPI network.

To understand the biological significance of DEGs, GO enrichment (http://geneontology.org/) and KEGG analyses (https://www.genome.jp/kegg/) were conducted using Database For Annotation, Visualization And Integrated Discovery (DAVID; http://david.ncifcrf.gov) (35), which is a free analysis online tool that provides a convenient method for identifying the biological role of DEGs.

The OncoLnc (http://www.oncolnc.org) database was used to perform survival analysis based on DEGs (36). OncLnc contains clinical data of 8,647 patients from 21 studies on cancer and precomputed survival analyses for users to explore survival associations in cancer. The difference in the expression level of BTG2 between healthy and breast cancer tissues was further analyzed with the Oncomine database (www.oncomine.org) (37). BTG2 expression was assessed in breast cancer tissues relative to that in healthy tissues. UALCAN (http://ualcan.path.uab.edu), which is an open web-portal for cancer subgroup gene expression, was then used to perform survival analysis of BTG2 in different cancer subgroups based on race, menopause status and cancer type (38).

Cell invasion was calculated based on the number of cells that passed through the polycarbonate membrane that separated the upper and lower chambers of an 8.0-µm Transwell chamber (Corning, Inc.). Briefly, Matrigel was thawed and diluted in serum-free DMEM (1:3) on ice. The Transwell chambers were placed in a 24-well plate, and 40 µl diluted Matrigel was added, followed by incubation at 37˚C for 2 h. Subsequently, 2x105 MCF-7 cells overexpressing BTG2 or transfected with the pcDNA3.1 empty vector [overexpression (OE)-negative control (NC)] or non-transfected cells were suspended in 200 µl serum-free DMEM and added to the upper chamber, while 800 µl DMEM containing 10% FBS was added to the lower chamber. The 24-well plate was placed in an incubator at 37˚C in the presence of 5% CO2 for 24 h. Subsequently, the upper chamber was removed while the lower chamber was washed with PBS three times. The cells in the lower chamber surface of the membrane were subsequently stained with 1% crystal violet at 25˚C for 10 min and the number of invading cells was counted under a light microscope (magnification, x200; Olympus Corporation).

A total of 5x105 MCF-7 cells/well were seeded into a six-well plate. Subsequently, a 1-ml sterile pipette tip was used to create a linear scratch in the cell monolayer. Fresh serum-free DMEM was then added to each well, and the cells were incubated at 37˚C in a 5% CO2 incubator for 24 h. A light microscope (magnification, x100) was used to observe the progressive change in the scratch width after 24 h. The migration distance was measured using ImageJ software 1.8.0 (National Institutes of Health).

Data are presented as the mean ± SEM. All experiments were duplicated and repeated at least three times. Statistical analyses were performed using GraphPad Prism 8.0 (GraphPad Software, Inc.). Unpaired Student's t-tests were used for the comparison between two groups. One-way ANOVA with the post hoc Tukey's test was used for the comparison of the mean values between multiple groups. Multiple regression analysis was used for the survival analyses. P<0.05 was considered to indicate a statistically significant difference.

Identification of DEGs and bioinformatics analysis

In the present study, 236 DEGs were identified in dataset GSE20437, which comprised epithelial samples from patients with breast cancer and patients that were cancer-free and receiving prophylactic mastectomy. The up- and downregulated genes are displayed in the volcano plot of Fig. 1. Results of the KEGG analysis demonstrated that the DEGs were enriched in ‘tight junction’, ‘DNA replication’, ‘base excision repair’, ‘pathways in cancer’ and ‘human T-cell leukemia virus type 1 infection’ (Fig. 2).

BTG2 suppresses the invasion and migration of MCF-7 cells

Crystal violet staining demonstrated that the number of MCF-7 cells that crossed the polycarbonate membrane of the Transwell invasion chamber in the OE-BTG2 group was significantly reduced, compared with the empty vector and blank control groups (Fig. 10A and B).

Furthermore, a scratch assay was used to further identify the effect of BTG2 overexpression on the migration of MCF-7 cells. Results displayed in Fig. 10C and D revealed that the wounded scratch area of MCF-7 cells in the OE-BTG2 group was markedly larger than that of the OE-NC and control groups after 24 h. These results suggested that the expression level of BTG2 may be associated with the inhibition of invasion and migration in MCF-7 cells.

Expression of BTG2 in luminal A breast cancer tissue

Breast cancer is considered to be a complex disease; based on the expression level of immunohistochemistry markers, such as PR, ER, HER2 and the proliferation index marker Ki67, breast cancer can be molecularly divided into luminal A, luminal B, HER2-enriched, basal and normal breast-like subtypes (40-43). As the most common subtype, luminal A breast cancer exhibits the following characteristics: ER-positive, PR >20%, HER2-negative and Ki67 <14%. To the best of our knowledge, luminal A tumors are sensitive to ET and insensitive to chemotherapy, and patients with luminal A subtype exhibit a better prognosis. However, ET often causes severe side effects and endocrine resistance, leading to poor prognosis (15,44-46). Therefore, there is an urgent need to identify effective treatment strategies and therapeutic targets for luminal A breast cancer.

The BTG2 gene is widely expressed in numerous organs and tissues, such as the lung, intestines, pancreas and prostate, and is involved in various biological activities in cancer cells as a tumor suppressor (47). It has been reported that BTG2 serves an important role in cell proliferation, DNA damage repair and apoptosis. Overexpression of BTG2 inhibits cell proliferation in pancreatic and lung cancer cells (48). However, overexpression of BTG2 also promotes the migration of bladder cancer cells and causes poor survival rates in patients with bladder cancer, indicating that the biological functions of BTG2 as a tumor suppressor may be cancer type-dependent (49). A previous study on the function of BTG2 on breast cancer mainly focused on triple-negative breast cancer (50), while few studies on BTG2 and luminal A breast cancer have been reported to date, to the best of our knowledge. Therefore, the identification of the biological function of BTG2 in luminal A breast cancer may accelerate the development of effective therapeutic targets for luminal A breast cancer.

Results of a previous study highlighted that miR-25-3p was upregulated in the triple-negative breast cancer cell lines MDA-MB-231 and SUM-1315, and miR-25-3p promoted cell proliferation (15,44-46). Moreover, suppression of miR-25-3p induced cell apoptosis. The aforementioned processes were mediated through regulation of BTG2 and the subsequent activation of the AKT and ERK-MAPK signaling pathways (50). In addition, miR-92a-3p expression was elevated in triple-negative breast cancer cell line MDA-MB-231 and luminal cell line MCF, and miR-92a-3p promoted cell proliferation and metastasis via BTG2 downregulation (51). Further investigations into the miR-92a-3p/BTG2 axis may lead to the development of an effective strategy for the treatment of luminal breast cancer.

In conclusion, the results of the present study demonstrated that BTG2 was a key targeted gene associated with breast cancer, and overexpression of BTG2 may suppress cell proliferation, invasion and migration in luminal A breast cancer. Thus, BTG2 may serve as a novel target for the treatment of luminal A breast cancer; however, further studies are required to fully elucidate the mechanisms underlying its specific function.

The datasets used and/or analyzed in the current study are available from the corresponding author on reasonable request.

All patients signed an informed consent form, and the experiments were approved by the Affiliated Weihai Second Municipal Hospital of Qingdao University's Ethics Review Board. 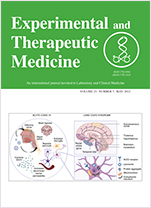