Mirabegron increases atrial fibrillation (AF) risk. The left atrium (LA) is the most critical ‘substrate’ for AF and has higher arrhythmogenesis compared with the right atrium (RA). The present study aimed to investigate the electrophysiological and arrhythmogenic effects of mirabegron on the LA and RA and clarify the potential underlying mechanisms. Conventional microelectrodes, a whole‑cell patch clamp and a confocal microscope were used in rabbit LA and RA preparations or single LA and RA myocytes before and after mirabegron administration with or without cotreatment with KT5823 [a cyclic adenosine monophosphate (cAMP)‑dependent protein kinase inhibitor]. The baseline action potential duration at repolarization extents of 20 and 50% (but not 90%) were shorter in the LA than in the RA. Mirabegron at 0.1 and 1 µM (but not 0.01 µM) reduced the action potential duration at repolarization extents of 20 and 50% in the LA and RA. Mirabegron (0.1 µM) increased the occurrence of tachypacing‑induced burst firing in the LA but not in the RA, where it was suppressed by KT5823 (1 µM). Mirabegron (0.1 µM) increased the L‑type Ca2+ current (ICa‑L), ultrarapid component of delayed rectifier K+ current (IKur), Ca2+ transients and sarcoplasmic reticulum Ca2+ content but reduced transient outward K+ current (Ito) in the LA myocytes. However, mirabegron did not change the Na+ current and delayed rectifier K+ current in the LA myocytes. Moreover, pretreatment with KT5823 (1 µM) inhibited the effects of mirabegron on ICa‑L, Ito and IKur in the LA myocytes. Furthermore, in the RA myocytes, mirabegron reduced ICa‑L but did not change Ito. In conclusion, mirabegron differentially regulates electrophysiological characteristics in the LA and RA. Through the activation of the cAMP‑dependent protein kinase pathway and induction of Ca2+ dysregulation, mirabegron may increase LA arrhythmogenesis, leading to increased AF risk.

β3-Adrenoreceptors (β3ARs) are involved in adipocyte metabolism, gut relaxation and vascular vasodilation (1). Mirabegron is a selective β3AR agonist approved for overactive bladder treatment (2-4). Although the role of β3AR in adipose, intestinal and vascular tissues is well established, its existence and function in the heart remain unclear. In human cardiomyocytes, β3ARs couple with the inhibitory G protein to exhibit a negative inotropic effect, which counterbalances the effects of β1- and β2-adrenergic stimulation in heart failure by increasing nitric oxide production (5,6). However, the differential expression of β3ARs can lead to distinct effects in tissues and cells. β3ARs can stimulate the L-type Ca2+ current (ICa-L) in human atrial cells and enhance atrial tissue contractility through the cyclic adenosine monophosphate (cAMP)-dependent protein kinase pathway (7).

All the experimental procedures were approved by the Institutional Animal Care and Use Committee of Taipei Veterans General Hospital, Taipei, Taiwan (approval no. IACUC-2021-011). Furthermore, the experimental protocols conformed to the institutional guideline for the care and use of laboratory animals as well as the Guide for the Care and Use of Laboratory Animals, published by the US National Institutes of Health (21). Male New Zealand white rabbits (n=36; weight, 2.5-3.5 kg; age, 6-8 months) used in the present study were purchased from Animal Health Research Institute (Council of Agriculture, Executive Yuan). All of the rabbits were housed in a temperature- and humidity-controlled environment (20-22˚C; 50-70% humidity) with a 12 h light/dark cycle, raised in stainless steel cages and had free access to food and water. Rabbits were anesthetized with an intramuscular injection of a mixture of zoletil (10 mg/kg; Virbac) and xylazine (5 mg/kg; Bayer AG) and sacrificed with an overdose of inhaled isoflurane (5% in oxygen; Panion & BF Biotech, Inc.) from a precision vaporizer (22,23). The anesthesia dosage was confirmed to be adequate on the basis of the absence of corneal reflexes and motor responses to pain stimuli. The hearts were excised through midline thoracotomy. The tissue preparations (1x1.5 cm2) of the LA and RA were separated from the LA and RA appendages, respectively. Electropharmacological measurements were obtained within 2 h after the separation. Tissue preparations (1-1.5 cm) of the RA and LA were superfused at 37˚C with normal Tyrode's solution composed of NaCl (137 mM), KCl (4 mM), NaHCO3 (15 mM), NaH2PO4 (0.5 mM), MgCl2 (0.5 mM), CaCl2 (2.7 mM) and dextrose (11 mM) at a constant rate of 3 ml/min. Tyrode's solution was saturated with a mixture of 97% O2 and 3% CO2 and its pH was adjusted to 7.4 with NaOH.

The transmembrane action potentials of the RA and LA were recorded using machine-pulled glass capillary microelectrodes filled with KCl (3 M) (20). The microelectrodes were connected to an FD223 electrometer (World Precision Instruments) under 150-mg tension. The electrical events were simultaneously displayed on a Gould 4072 oscilloscope (Gould) and a Gould TA11 recorder (Gould). Electrical stimuli were applied using a Grass S88 stimulator (Grass Instruments) through a Grass SIU5B stimulus isolation unit. The action potential parameters were measured by applying 2-Hz electrical stimuli. The action potential amplitude (APA) was calculated as the difference between the resting membrane potential (RMP) and the peak of action potential depolarization. The action potential duration (APD) at repolarization extents of 90, 50 and 20% of the APD were measured and designated as APD90, APD50 and APD20, respectively. Burst firing was defined as the occurrence of accelerated spontaneous activities (faster than the basal rate) with sudden onset and termination. The same RA and LA tissue preparations were sequentially treated with different concentrations (0.01, 0.1 and 1 µM) of mirabegron (Avara Pharmaceutical Technologies) in Tyrode's solution for 30 min to investigate the electrophysiological effects of mirabegron with and without 1 µM KT5823 (an inhibitor of cAMP-dependent protein kinase; MilliporeSigma).

Single LA and RA myocytes from rabbits were enzymatically dissociated, as described previously (24). Whole-cell patch clamp recordings of the single LA and RA myocytes were obtained before and after the administration of mirabegron (0.1 µM) with or without KT5823 (1 µM) using an Axopatch 1D amplifier (Axon Instruments) at 35±1˚C. The ionic currents were recorded at ~3-5 min after rupture or perforation to obtain measurements before ion channel activity decay over time. A small hyperpolarizing step from a holding potential of -50 mV to a test potential of -55 mV for 80 msec was delivered at the beginning of each experiment. The area under the capacitive current curve was divided using the applied voltage step to obtain the total cell capacitance. In general, 60-80% series resistance was electronically compensated. Ionic currents were recorded in the current- and voltage-clamp modes.

ICa-L was measured as an inward current during depolarization from a holding potential of -50 mV to test potentials ranging from -40-+60 mV in 10-mV increments for 300 msec at a 0.1-Hz frequency by using a perforated patch clamp with amphotericin B. The external solution contained TEACl (20 mM), CsCl (133 mM), HEPES (10 mM), MgCl2 (0.5 mM), CaCl2 (1.8 mM) and glucose (10 mM) titrated to a pH of 7.4 with NaOH. Tetrodotoxin (10 µM) and 4-aminopyridine (2 mM) were added to the external solution to block Na+ channels and transient outward K+ current (Ito), respectively. The micropipettes were filled with a solution containing CsCl (130 mM), MgCl2 (1 mM), Mg2ATP (5 mM), HEPES (10 mM), EGTA (10 mM), NaGTP (0.1 mM) and Na2 phosphocreatine (5 mM) titrated to a pH of 7.2 with CsOH. Steady-state inactivation of ICa-L was evaluated using a standard protocol consisting of a 300-msec prepulse and a 150-msec test pulse. The peak current elicited by the test pulse was divided by the maximal current and plotted as a function of prepulse voltage. Data points were fitted using a Boltzmann function. Recovery from ICa-L inactivation was assessed using a two-pulse protocol with a 200-msec prepulse and test pulse (from -80-+10 mV) separated using varying time intervals. Data points were fitted with a single-exponential function (25).

Intracellular Ca2+ was measured in single LA myocytes, as described previously (26). In brief, LA myocytes were loaded with fluorescent Ca2+ (10 µM) fluo-3/AM for 30 min at room temperature. After intracellular hydrolysis of fluo-3/AM for 30 min, the excess extracellular dye was removed by changing the bath solution. Fluo-3 fluorescence was triggered using a 488-nm argon-ion laser line, with the emission recorded at >515 nm. The LA myocytes were repetitively scanned at 2-msec intervals for line scan imaging (8-bit). Fluorescence imaging was performed using a laser scanning confocal microscope (Zeiss LSM 510; Zeiss GmbH) and an inverted microscope (Axiovert 100; Zeiss GmbH). To exclude variations in the fluorescence intensity due to different volumes of injected dye and to correct for variations in dye concentrations, the fluorescent signals were calculated by normalizing the fluorescence (F) against the baseline fluorescence (F0); in this manner, reliable information was obtained on transient intracellular Ca2+ changes from baseline values [ΔF=(F-F0)/F0]. The intracellular Ca2+ changes, including transient Ca2+i, peak systolic Ca2+i and diastolic Ca2+i, were obtained during a 2-Hz field stimulation with 10-msec twice-threshold-strength square-wave pulses. Through the addition of 20 mM caffeine after electric stimulation at 2 Hz for at least 30 sec, the estimated sarcoplasmic reticulum (SR) Ca2+ content was measured as the total SR Ca2+ content from the peak amplitude of the caffeine induced Ca2+i.

All continuous variables are expressed as means ± standard deviations. Paired t test, one-way or two-way repeated-measures analysis of variance with the Bonferroni post hoc test was used to compare the difference between LA and RA or the effects of mirabegron on the LA and RA tissue preparations and isolated single myocytes. The McNemar test was used to compare the incidence of burst firing before and after drug administration in the LA and RA tissue preparations. P<0.05 was considered to indicate a statistically significant difference.

Effects of mirabegron on ionic currents and Ca2+ homeostasis

The present study compared baseline ICa-L and Ito in the LA and RA myocytes and found that the LA myocytes had a smaller ICa-L but a larger Ito than the RA myocytes (Fig. S1).

The present study, for the first time to the best of the authors' knowledge, found that mirabegron significantly increased the inducibility of burst firing through tachypacing in the LA but not in the RA, suggesting that mirabegron differentially induces atrial arrhythmogenesis in the LA but not the RA. Moreover, the results indicated that KT5823, a cAMP-dependent protein kinase inhibitor, suppressed burst firing induced by 20-Hz tachypacing and mirabegron in the LA. These results suggested that the cAMP-dependent protein kinase pathway may serve a role in mirabegron-induced atrial arrhythmogenesis.

In the present study, mirabegron was found to accelerate LA and RA repolarization, which possibly reduces the effective refractory period, favoring the genesis of reentry (29). The results of the present study revealed that mirabegron significantly shortened the APD20 and APD50 but not APD90 of the LA and RA. In theory, APD20 and APD50 are affected by not only Ca2+ channels but also other ion channels, such as voltage-gated K+ channels (Ito and IKur). The present study found that mirabegron reduced ICa-L but did not alter Ito in the RA myocytes. By contrast, mirabegron significantly increased ICa-L but reduced Ito in the LA myocytes. These findings suggested that mirabegron affected the electrophysiological characteristics of the LA and RA differentially, ultimately leading to atrial arrhythmogenesis. The whole-cell patch clamp experiments demonstrated that mirabegron increased ICa-L and IKur but reduced Ito in the LA myocytes. These results suggested that the shortening of the APD20 and APD50 of the LA is mainly attributable to the composite effects of mirabegron on ICa-L, IKur and Ito. The results also indicated that mirabegron did not alter the APD90 of the LA and RA. Phase 3 repolarization occurs because of the time-dependent inactivation of ICa-L and activation of IKr-tail. The IKr-tail, rapid component of IKr-tail and slow component of IKr-tail all play major roles in phase 3 repolarization (30). In the current study, IKr-tail in the LA myocytes remained unchanged after mirabegron treatment and this unchanged IKr-tail was responsible for APD90 expression caused by mirabegron in the LA.

In conclusion, mirabegron differentially modulated the electrophysiological and arrhythmogenic effects in the LA and RA. Through the activation of the cAMP-dependent protein kinase pathway and induction of Ca2+ dysregulation, mirabegron may increase LA arrhythmogenesis, increasing AF risk in patients receiving mirabegron treatment.

The datasets used and/or analyzed during the present study are available from the corresponding authors on reasonable request. 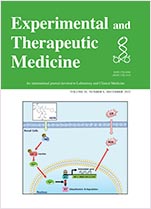