The effect of androgens on the prevention or promotion of cell cycle progression in ovarian and breast cancer is controversial. This effect determines the basic rules of how to treat postmenopausal patients properly after surgery. In the present study, we investigated the effects of different androgens, namely dihydrotestosterone (DHT), testosterone and dehydroepiandrosterone (DHEA) in MCF-7 breast cancer and OVCAR-3 ovarian cancer cells. We found that DHT could down-regulate p27, but not p21, within 4 h. Further studies proved that DHT induced p27 degradation through the ubiquitin-proteasome proteolytic pathway. Inhibition of the androgen receptor and of phosphorylation did not hamper the degradation. However, proteolysis inhibitors effectively antagonized the DHT-induced p27 degradation. Knockdown of the S-phase kinase-associated protein 2 (SKP2), rather than of the Kip1 ubiquitination promoting complex 1 (KPC1), also prevented p27 down-regulation. DHT led to the direct binding of p27 to SKP2 independent of the phosphorylation status. Collectively, DHT, but not the other examined androgens regulated the degradation of p27 in MCF-7 and OVCAR-3 cells. Furthermore, SKP2 was shown to act as a DHT receptor. 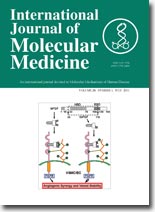