Insulin-like growth factor-1 (IGF-1) is one of the most important components of bovine colostrum. It exhibits antiapoptotic and antioxidative activities. Prion diseases are neurodegenerative disorders caused by cell death through mitochondrial dysfunction and increasing generation of reactive oxygen species (ROS). This study examined the protective effect of IGF-1 on residues 106-126 of the cellular prion protein [PrP (106-126)]-mediated mitochondrial neurotoxicity and oxidative stress. In SH-SY5Y human neuronal cells, treatment with PrP (106-126) decreased the cell viability and IGF-1 pretreatment markedly blocked the PrP (106-126)-induced neuronal cell death. IGF-1 inhibited PrP (106-126)-induced intracellular ROS generation and mitochondrial oxidative stress. In addition, IGF-1 blocked the translocation of the Bax protein to the mitochondria induced by PrP (106-126). These results demonstrate that IGF-1 protects neuronal cells against PrP (106-126)-mediated neurotoxicity through an antioxidative effect and blockage of mitochondrial Bax translocation. The results also suggest that regulation of IGF-1 secretion may have a therapeutic potential in the management of mitochondrial dysfunction and oxidative stress-induced neurodegeneration.

Prion diseases or transmissible spongiform encephalopathies (TSEs) are a group of animal and human brain diseases that are uniformly fatal and often characterized by a long incubation period and spongiform degeneration, multifocal neuropathologic picture of neuronal loss and neuronal death (1). Prion diseases are peculiar in that they are caused by an infectious agent, prion, whose main component is an abnormal isoform (PrPSc) of prion protein (PrP) (2). A synthetic peptide similar to sequence 106–126 of human [PrP (106–126)] induces apoptosis in primary rat hippocampal cultures (3). PrP (106–126), which is composed of amino acid sequence 106–126 of PrP, has been reported to induce apoptosis in a variety of cells (4). PrP (106–126) has been used to explore the neurotoxic mechanisms underlying prion disorders and has been demonstrated to induce mitochondria dysfunction (3).

Oxidative stress results from increased content of ROS (11). Oxidation of the mitochondrial permeability transition pores by ROS may contribute to cytochrome c release due to disruption of the mitochondrial membrane potential (12). Oxidative stress leads to the intracellular production of ROS (13). Hence, oxidative stress can cause irreversible cellular damage since intracellular defense mechanisms are depleted and therefore cannot protect cells against ROS-mediated damage (13). In particular, ROS are recognized as crucial mediators of biological responses (14), including neurode-generative disorders by misfolded protein (4). PrP contributes to the neuronal loss that occurs in prion disorders, through mechanisms involving modulation of cellular oxidation pathways (4).

Previous reports indicated that insulin-like growth factor (IGF) signaling can reduce oxidative stress in neurodegenerative disorders (15). Insulin-like growth factor-1 (IGF-1) is a multifunctional peptide that is structurally similar to insulin (16) and which is essential for normal fetal and postnatal growth, development, metabolism and apoptosis in mammals (16). IGF-1 is a trophic hormone with multiple neuroprotective actions (17). IGF-1 has salutary effects on mitochondria. However, the molecular mechanism of IGF-1-mediated neuronal survival is only beginning to be understood. Moreover, the pathogenesis of a number of neurodegenerative diseases is attributed to IGF-1 deficiency (18). IGF-1 has a neuroprotective effect via regulation of the serine kinase Akt that forms part of the canonical IGF-I pro-survival signaling pathway (17) and which is altered in neurodegenerative diseases including Huntington’s disease and spinocerebellar ataxia (19).

Synthetic PrP (106–126) (sequence, Lys-Thr-Asn-Met-Lys-His-Met-Ala-Gly-Ala-Ala-Ala-Ala-Gly-Ala-Val-Val-Gly-Gly-Leu-Gly) was synthesized by Peptron (Seoul, Korea). The peptide was dissolved in sterile dimethylsulfoxide (DMSO) at a concentration of 10 mM and stored at −80°C.

SH-SY5Y cells were resuspended in mitochondrial buffer (210 mM sucrose, 70 mM mannitol, 1 mM EDTA and 10 mM HEPES), broken by a 26-gauge needle and centrifuged at 700 x g for 10 min. The postnuclear supernatant was centrifuged at 10,000 x g for 30 min. The pellet was used as the mitochondrial fraction, and the super-natant was used as the cytosolic fraction. Total proteins were obtained and subjected to western blotting.

SH-SY5Y cells were incubated in MEM (Hyclone Laboratories, Logan, UT, USA) containing 10 μM 2′,7′-dichlorodihydrofluorescein diacetate (H2-DCFDA) at 37°C for 30 min. Cells were washed with phosphate-buffered saline (PBS) and lysed in the aforementioned lysis buffer. Cells were transferred to a clear 96-well plate, and fluorescent emission was measured at 515 nm on bottom read, with an excitation wavelength of 488 nm, using a SpectraMax M2 instrument (Molecular Devices, Sunnyvale, CA, USA). SH-SY5Y cells were cultured on cover slips positioned in a 24-well plate. Cells were incubated in MEM (Hyclone Laboratories) containing 10 μM H2-DCFDA) at 37°C for 30 min and were then washed with PBS.

The change in MTP was evaluated by the cationic fluorescent indicator JC-1 (Molecular Probes, Eugene, OR, USA), which aggregates in intact mitochondria (red fluorescence) indicating high or normal MTP and low MTP when it remains in monomeric form in the cytoplasm (green fluorescence). SH-SY5Y cells were incubated in MEM containing 10 μM JC-1 at 37°C for 30 min, washed with PBS, and subsequently transferred to a clear 96-well plate. JC-1 aggregate fluorescent emission was measured at 583 nm with an excitation wavelength of 526 nm, and JC-1 monomer fluorescence intensity was measured with an excitation and emission wavelength of 525 and 530 nm, respectively, using a Guava easyCyte HT System (Millipore). SH-SY5Y cells were cultured on cover slips in a 24-well plate, incubated in MEM containing 10 μm JC-1 at 37°C for 30 min and then washed with PBS. Finally, cells were mounted with DakoCytomation fluorescent medium and visualized via fluorescence microscopy.

All data are expressed as mean ± standard deviation (SD), and were compared using the Student’s t-test and the ANOVA Duncan’s test with the SAS statistical package (SAS, Cary, NC, USA). The results were considered statistically significant at *P<0.05 or **P<0.01.

IGF-1 is neuroprotective in neurodegenerative diseases and is involved in Huntington’s disease (20). To examine whether IGF-1 treatment protects neuronal cells from PrP (106–126)-mediated neurotoxic effects, SH-SY5Y cells were pretreated with IGF-1 before exposure to PrP (106–126). The protective effect of IGF-1 was determined by an Annexin V viability assay. SH-SY5Y cells were pretreated for 12 h with 200 ng/ml IGF-1 and then exposed to 100 μM PrP (106–126) for 24 h. Cells were responsive to PrP (106–126) treatment (43.7% increase in Annexin V-positive cells) and IGF-1 had no effect on Annexin V assay results (Fig. 1A). As shown in Fig. 1B, IGF-1 at different concentrations (50, 100, 200 and 400 ng/ml) significantly attenuated the neurotoxicity induced by 24-h exposure to 100 μM PrP (106–126). These results were confirmed by morphological observations of the treated cells using light microscopy (Fig. 1C). PrP (106–126)-induced morphological changes were significantly alleviated by IGF-1. TUNEL assay results revealed that the concentration of fluorescent-fragmented nuclei increased in the 100 μM PrP (106–126)-treated group compared to the 200 ng/ml IGF-1-pretreated group and the control group (Fig. 1D). These results suggest that IGF-1 promotes SH-SY5Y survival by preventing cell death induced by PrP (106–126).

The synthetic peptide PrP (106–126) is composed of human prion protein (PrP) amino acid residues 106–126 (25). PrP (106–126) maintains the neurotoxic properties of the entire pathological PrPSc and is widely used as a reasonable model to study the mechanism of prion disorders (25). However, the mechanism by which this peptide induces cell death in neuronal cells is not fully understood. Most of these diseases (including Creutzfeldt-Jakob disease, scrapie and Alzheimer’s disease) are caused by accumulation of PrPSc (26). Therefore, the accumulation of PrPSc has been postulated to be a solitary inducer of disease onset due to neuronal cell death (26).

IGF-1 is a multifunctional peptide that is structurally similar to insulin and has neuroprotective and antiapoptotic properties (16). The IGF-I pro-survival signaling pathway is altered in neurodegenerative diseases including Huntington’s disease and spinocerebellar ataxia (19). Furthermore, scrapie infection affects the expression, binding affinity and signal transduction mediated by IGF-1R in neuroblastoma cells (27). However, the protective effect of IGF-1 on PrP (106–126)-induced neuronal cells has yet to be fully clarified.

We considered whether IGF-1 could exert a neuroprotective effect on prion disease, and this prompted our examination of the possible beneficial effects of IGF-1 on PrP (106–126)-induced neuronal cell damage. Our results demonstrate that IGF-1 prevents prion-induced neuronal cell death and neurotoxicity in SH-SY5Y cells pretreated with IGF-1 for 12 h prior to 24 h exposure to PrP (106–126) (Fig. 1).

PrP (106–126) induces neuronal cell death by activating JNK protein phosphorylation and decreasing the level of the Bcl-2 protein (21,28). JNK, an established mediator of stress-induced apoptosis, is involved in the neurodegenerative processes in neurodegenerative disorders (29), and represents a potential therapeutic target for blockage of apoptosis induced by PrP (106–126) (11). We demonstrated the involvement of IGF-1 action on PrP (106–126)-induced phosphorylated JNK and decreased Bcl-2 protein expression by western blotting. PrP (106–126) induced the phosphorylation of JNK and decreased Bcl-2 expression; these actions were inhibited by IGF-1 (Fig. 2).

Similarly, previous studies have demonstrated that activation of glycogen synthase kinase 3-β (GSK-3β) precedes the activation of JNK and that this effect contributes to apoptotic signaling (16). Markedly, the activation of GSK-3β is an important mediator of prion peptide-induced neurodegeneration and neuronal cell survival in neurodegenerative disorders is mediated by JNK inactivation via phosphorylated AKT dependent GSK-3β inhibition (16,30). In addition, the protective effects of IGF-1 are mediated by pAKT expression in neuronal cells (15). Our results indicate that the inhibition of PrP (106–126)-induced JNK activation is a downstream event of AKT/GSK-3β signaling and may add more weight to GSK-3β blockage in the treatment of prion disorders.

This study has shown that PrP (106–126)-induced intracellular ROS production changed by IGF-1 treatment, and was investigated by antioxidant agents (GSN and NAC) (Fig. 3).

This study was supported by the Cooperative Research Program for Agriculture Science and Technology Development (PJ907116) in the Rural Development Administration, Republic of Korea. 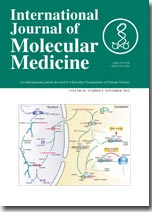