15-Deoxy-∆12,14-prostaglandin J2 (15d-PGJ2), a peroxisome proliferator-activated receptor γ ligand, has been reported to have antiproliferative activity in certain types of cancer. The purpose of this study was to elucidate the effect of 15d-PGJ2 on endometrial cancer cells, as well as the mechanism of action. Endometrial cancer-derived cells (HHUA, Ishikawa and HEC-59) were treated with various concentrations of 15d-PGJ2, and its effects on cell growth, the cell cycle and apoptosis were investigated in vitro. Using cDNA microarrays, some potential targets of this drug were identified. All endometrial cancer cell lines were sensitive to the growth-inhibitory effect of 15d-PGJ2. Cell cycle arrest at the G2/M phase of the cell cycle and induction of apoptosis were observed. Concerning the gene expression changes induced by 15d-PGJ2 treatment, the upregulation of aldo-keto reductase family 1 member C3 (AKR1C3) and the downregulation of anterior gradient homolog 3 (AGR3) and nitric oxide synthase 2A (NOS2A) were confirmed using western blot analysis in all the cell lines examined. These results suggest that 15d-PGJ2 may be a novel therapeutic option for the treatment of endometrial cancer.

Peroxisome proliferator-activated receptor (PPAR)γ is a nuclear hormone receptor and its ligands, troglitazone and pioglitazone, have been shown to induce apoptosis in several types of cancer cells, including endometrial cancer cells (4–6). 15-Deoxy-Δ12,14-prostaglandin J2 (15d-PGJ2) is a PPARγ ligand that activates PPARγ at micromolar concentrations in humans in vivo (7–9). Recently, 15d-PGJ2 was reported to have antiproliferative activity in certain types of cancer (4,10–12). However, the effect of 15d-PGJ2 on endometrial cancer cells has not yet been investigated.

15d-PGJ2 was obtained from Enzo Life Sciences (Plymouth Meeting, Montgomery County, PA, USA), and prepared as a 20 mg/ml stock solution in dimethyl sulfoxide (DMSO). The stock solution was stored in aliquots at −20°C.

The cell proliferation and cell viability were determined in 96-well plates by a modified methylthiazol tetrazolium (MTT) assay using WST-1 (Roche Diagnostics, Penzberg, Germany) following the manufacturer’s instructions. We distributed 5×103 cells in DMEM supplemented with 10% FBS into each well of a 96-well flat-bottomed microplate (Corning, Inc., New York, NY, USA) and incubated them overnight. The medium was then removed, and the cells were incubated for 48 h with 100 μl of experimental medium containing various concentrations of 15d-PGJ2. Thereafter, 10 μl of WST-1 dye was added to each well, and the cells were further incubated for 4 h. All experiments were performed in the presence of 10% FBS. Cell proliferation was evaluated by measuring the absorbance at 540 nm. Data were calculated as the ratio of the values obtained for the 15d-PGJ2-treated cells to those for the untreated controls.

The cell cycle was analyzed by flow cytometry after 2 days of culturing. Cells (5×104) were exposed to 15d-PGJ2 in 6-well flat-bottomed plates for 48 h. Analysis was performed immediately after staining using the CellFIT program (Becton-Dickinson, San Jose, CA, USA), whereby the S phase was calculated using an RFit model.

Cells were plated and grown overnight until they reached 80% confluence and then treated with 15d-PGJ2. After 48 h, detached cells in the medium were collected, and the remaining adherent cells were harvested by trypsinization. The cells (1×105) were washed with PBS and resuspended in 250 μl of binding buffer (Annexin V-FITC kit; Becton-Dickinson) containing 10 μl of 20 μg/ml PI and 5 μl of Annexin V-FITC, which binds to phosphatidylserine translocated to the exterior of the cell membrane early in the apoptotic pathway as well as during necrosis. After incubation for 10 min at room temperature in a light-protected area, the samples were analyzed on a FACSCalibur flow cytometer (Becton-Dickinson). FITC and PI emissions were detected in the FL-1 and FL-2 channels, respectively. For each sample, data from 30,000 cells were recorded in list mode on logarithmic scales. Subsequent analysis was performed with CellQuest software (Becton-Dickinson).

Cells were prepared for FACS analysis as described above and stained using a Mitocapture Apoptosis Detection kit obtained from BioVision (Palo Alto, CA, USA) with a fluorescent lipophilic cationic reagent that assesses mitochondrial membrane permeability, according to the manufacturer’s recommendations.

For Gene Ontology (GO) analysis, differentially expressed genes were defined as those with a >2-fold increase or decrease in expression relative to the controls. GO term enrichment in the upregulated or downregulated gene sets was assessed using the GOstat web tool (13).

Data are presented as the means ± SD of representative experiments and were analyzed by the Bonferroni-Dunn test using StatView 4.5 software (Abacus Concepts, Berkeley, CA, USA). A P-value <0.05 was considered to indicate a statistically significant difference.

We then investigated whether 15d-PGJ2 would lead to the induction of apoptosis and/or cell cycle arrest in the endometrial cancer cells (Table I). 15d-PGJ2 led to an increase in the sub G0/G1 apoptotic cell population and the cell population in the G2/M phase of the cell cycle compared to treatment with the vehicle alone, with a concomitant decrease in the proportion of cells in the S phase.

To assess the ability of the endometrial cancer cells to undergo apoptosis in response to 15d-PGJ2 exposure and to distinguish between the different types of cell death, we double-stained the 15d-PGJ2-treated cells with Annexin V and PI and analyzed the results using flow cytometry. Annexin V binding combined with PI labeling was performed for the distinction of early apoptotic (Annexin V+/PI−) and necrotic (Annexin V+/PI+) cells. At increasing doses of 15d-PGJ2, a simultaneous increase in both the Annexin V+/PI− fraction (early apoptotic) and Annexin V+/PI+ (regarded as necrotic) subpopulations was detected (Table II).

a P<0.05 compared to the vehicle. Effect of 15d-PGJ2 treatment on the mitochondrial transmembrane potential (MTP assay). Cells were cultured with 10 μM of 15d-PGJ2 for 48 h, and the MitoCapture intensity (representing MTP) was determined by flow cytometry.

Loss of MTP in response to treatment with 15d-PGJ2

It has been shown that the loss of MTP occurs prior to nuclear condensation and caspase activation and is linked to cytochrome c release in many, but not all, apoptotic cells (14,15). It was found that the treatment of endometrial cancer cells with 15d-PGJ2 resulted in the loss of MTP (Table II).

In order to identify potential and novel target genes responsive to the anticancer effects in 15d-PGJ2-treated endometrial cancer cells, we examined the global changes in gene expression in the HHUA cells following treatment with 10 μM of 15d-PGJ2 for 48 h (Tables III and IV). Of the 44,000 genes, GO analysis was carried out on the genes upregulated and downregulated by the treatment (Tables V and VI).

Permutation analysis of the correlation between GO terms and upregulated genes following treatment with 15d-PGJ2.

Permutation analysis of the correlation between GO terms and downregulated genes following treatment with 15d-PGJ2.

Effects of 15d-PGJ2 on the expression of novel proteins

Results of western blot analysis in the 3 cell lines.

In the present study, we demonstrated that 15d-PGJ2 inhibits cell viability in endometrial cancer cells. The prominent arrest of these cells in the G2/M phase of the cell cycle and the induction of apoptosis likely account for this inhibitory effect, suggesting that 15d-PGJ2 has anticancer activity.

In order to investigate the molecular mechanisms involved in the effects of 15d-PGJ2 on the cell cycle arrest and the induction of apoptosis, we investigated the global gene expression profile changes in HHUA endometrial cancer cells following treatment with 15d-PGJ2. Surprisingly, the expression of PPARγ or angiotensin II type 1 receptor (AT1R) was not altered, although 15d-PGJ2 has been characterized as a potent PPARγ ligand. To identify novel target genes of 15d-PGJ2, we focused on some GO terms of the numerous genes upregulated and downregulated by 15d-PGJ2 treatment in the HHUA cells. GO analysis revealed that oxidation reduction (GO:0055114) and oxidoreductase activity (GO:0016491) were enriched in genes that were overexpressed in the 15d-PGJ2-treated HHUA cells compared to the untreated HHUA cells. Both GO terms include AKR1C3.

AKR1C3 is a multifunctional enzyme involved in androgen, estrogen, progesterone and prostaglandin metabolism. AKR1C3-mediated steroid metabolism may play a critical role in the maintenance of viable normal and abnormal endometrial epithelium (16). AKR1C3 has been reported to play important roles in the physiology of endometrial cells and that suppressed AKR1C3 expression represents a feature that allows the differentiation of hyperplastic and neoplastic endometrial epithelium from normal endometrial epithelium (16). In the present study, we demonstrated that 15d-PGJ2 markedly upregulated the levels of the AKR1C3 protein in all 3 endometrial cancer cell lines. Based on these observations, it can be hypothesized that the 15d-PGJ2-induced anticancer activity may be mediated, at least in part, by the upregulation of AKR1C3 in human endometrial cancer cells.

We confirmed the downregulation of AGR3 using western blot analysis in all 3 cell lines examined. AGR genes, a protein disulfide isomerase (PDI) family, harbour core thioredoxin folds (CxxS motifs) that have the potential to regulate protein folding and maturation. AGR3 is overexpressed by a hormone (estrogen-receptor α)-independent mechanism, identifying a novel protein-folding associated pathway that can mediate resistance to DNA-damaging agents in human cancers (17). These findings indicate that the downregulation of AGR3 by 15d-PGJ2 may cause DNA-damage, leading to the apoptosis of endometrial cancer cells.

Nitric oxide, a reactive free radical, acts as a biological mediator in several processes, including neurotransmission and antimicrobial and antitumor activities. The NOS2A gene encodes a nitric oxide synthase which is expressed in the liver and is inducible by a combination of lipopolysaccharide and certain cytokines. A recent study revealed that NOS2 upregulation contributes primarily to the proliferation and tumor maintenance in highly tumorigenic human glioma stem cells (18). Therefore, our finding that 15d-PGJ2 downregulated NOS2A expression suggests that the eicosanoid may inhibit the proliferation and maintenance of endometrial cancer cells via NOS2A downregulation.

In conclusion, the data from the present study demonstrate that 15d-PGJ2 exhibits anti-proliferative activity, potently induces cell cycle arrest, and stimulates apoptosis in human endometrial cancer cells. These events were accompanied by the upregulation of AKR1C3 and the downregulation of AGR3 and NOS2A. It is suggested that 15d-PGJ2 may be a novel therapeutic option for the treatment of endometrial cancer. 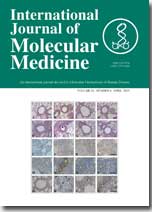