Invasive cervical cancer (ICC) is one of the most common types of cancer affecting women worldwide, in both incidence and mortality (1,2). There is a long developmental process between the stages of cervical intraepithelial neoplasia (CIN) to cervical cancer. Early screening and appropriate treatment may prevent the development of CIN; some lesions can be cured completely, and other minor lesions will soon return to normal without treatment (3). Since the introduction of the Papanicolaou test (Pap smear) decades ago, the mortality and morbidity rates for patients with invasive cervical cancer have reduced greatly, particularly in developed countries (4–9). The achievement of Pap smear testing for public health is significant. However, there are still 500,000 cases of cervical cancer and 275,000 cervical cancer deaths among women worldwide, and the incidence rates in developing countries are particularly high (10). The sensitivity of the Pap smear varies substantially in areas with different screening infrastructures (11). In several meta-analyses of the accuracy of Pap smears, the sensitivity ranged from approximately 50 to 80%, but can be as low as 20% (12–14), which limits the efficacy of cancer detection (15). Over the past decade, the liquid-based Pap test has been introduced to overcome the drawbacks of the conventional Pap smear and has resulted in the reduction of limited and unsatisfactory specimens and in an improvement in the adequacy and detection rates for squamous intraepithelial lesions (16). Due to sampling error, there are still some discrepancies in the interpretation between the cytological and histological diagnoses of the simultaneously sampled smears and biopsy specimens.

Laboratory and epidemiological research has suggested a strong association between HPV infection and cervical cancer (17). However, the discrepancy between high rates of HPV infection and low rates of cervical cancer development among women suggests that additional genetic events are necessary for the progression to a malignant phenotype. Chromosomal instability at a numerical or structural level is a hallmark of malignant tumors (18). Indeed, recurrent patterns of chromosomal alterations with specific imbalances that are important for tumor initiation and progression have been revealed in cervical cancer (19). Deletion, duplication and amplification of various genomic regions have been demonstrated in cervical cancer by comparative genomic hybridization and fluorescence in situ hybridization (FISH) methods (20–23). A number of studies have demonstrated frequent gain or loss of several specific chromosomal regions in cervical cancer, e.g., gain of 3q, 5p, 8q, 11q, 17q and 20q and loss of 3p, 4p, 5q and 18q (21,23–28). At present, the gene(s) involved in these regions and their biologic functions in this disease have not yet been fully identified.

A proto-oncogene can be abnormally activated and turned into an oncogene; gene amplification is the dominant mechanism for oncogene activation in solid tumors (29). The aberrant activation and/or overexpression of different oncogenes are associated with the development and progression of human tumors (30). MYC genes are key regulators of cell proliferation, and the enhanced expression of MYC genes promotes unrestricted proliferation and contributes to the genesis of most human tumors (31). The amplification and overexpression of the MYC gene have been detected in both cell lines and cervical cancers (32,33). Studies from the US NIH in 2005 for cervical cancer demonstrated that the process of cervical cell variation into cervical cancer is always accompanied with the amplification of the long arm of chromosome 3 (34,35). The most important genes involved are human telomerase RNA component (hTERC). Sokolova et al (36) assessed biopsy specimens showing high-grade dysplasia and cancer with FISH probes to 35 unique loci and identified 2 loci, the 3q26.3 region (comprising the hTERC gene) and the 8q24 region (comprising the c-MYC gene), which showed the highest frequency of copy number gains in high-grade dysplasia and cancer. These loci are frequently altered in cervical cancer tumorigenesis (21,22,28,37). Thus, they may be useful markers for the detection of cervical dysplasia and carcinoma.

The FISH technique, which provides an accurate quantification of the signals (2) is relatively simple to operate, has good reproducibility, stability, and has the advantages of good sensitivity and specificity; it does not require cell culture and be used in interphase cells; FISH is easily adaptable to clinical detection.

Specimens were obtained from the First Affiliated Hospital of Chongqing Medical University (Chongqing, China) between December 2010 and July 2011. Adenocarcinoma specimens were not included. The age of the patients ranged between 22 and 66 years. Exclusion criteria included pregnancy, menstrual period, chronic or acute systemic viral infections, a history of cervical neoplasia, an immunocompromised state, the presence of other cancers, a history of surgery to the uterine cervix, persons had been undergone colposcopic biopsy or cases that had been treated.

A cervical brush (a special Pap Brush; Beijing TCT Medical Technology Company, Ltd., Beijing, China) was used to collect the cervical epithelial exfoliated cells following the manufacturer’s instructions. The exfoliated cells were preserved in phosphate-buffered saline at 4°C until FISH examination. All the patients were diagnosed and had their specimens banked at the First Affiliated Hospital of Chongqing Medical University. Patients who had low- and high-grade lesions identified by cytology underwent colposcopic cervical biopsy and that sometimes included subsequent conization or major surgery. The final diagnosis was made by tissue-proven pathology rather than cytology, apart from the controls. Controls were recruited from healthy women who underwent routine Pap screening. Informed consent was obtained from all patients and control subjects. The Institutional Review Board of the Peking Union Medical College Hospital as the lead hospital of the project approved this study.

Following hybridization and the removal of the coverslips, the slides were washed in 3 bottles of 2X SSC/50% formamide solution for 10 min in each bottle, in 2X SSC for 10 min, in 0.1% Nonidet P-40/2X SSC for 5 min, in 70% ethanol for 3 min. Following stringent washing with a series of solution, the slides followed by air drying were applied with the anti-fade solution containing the nuclear counterstain 4,6-diamidino-2-phenylindole (DAPI), and the slides were coverslipped. After being placed back in a black box for 10–20 min, the slides were observed under a fluorescence microscope (Olympus).

Each sample had 2 slides and each slide was detected by FISH with 1 probe group. All the slides were analyzed under a fluorescence microscope using ×10, ×40 and ×100 magnification equipped with the corresponding wavelength filter, a CCD camera and an image-capturing and analyzing system. A magnification of ×10 to was used to find the cell region in slide; ×40 magnification was used to scan the entire hybrid area and observe the quality of the specimens, and ×100 magnification was used for the evaluation of signal scoring. In most cases, the entire surface area of each slide was analyzed. However, in cases involving a large number of cells per slide, only the first 100 cells were analyzed. In these cases, the estimated number of cells on the entire slide was extrapolated from the percentage of surface area enumerated after enumerating 100 cells. The exact copy number of the signals per nucleus was recorded, and at least 100 nuclei/sample were analyzed. Only satisfactory samples with ≥3 copies/nucleus of the given genes in >75% of the counted cells were considered to contain gene amplification.

FISH was successively performed on 171 cases. The distribution of the specimens based on the cytology and biopsy classification is shown in Table I.

Distribution of specimens based on the cytology and biopsy classification.

Amplification of hTERC and c-MYC

Comparison of the amplification rate for hTERC and c-MYC in the different groups (%, M).

On the basis of the percentage of cells that had gene amplification for the chromosome probe markers, 3q26.3 (hTERC) or 8q24 (c-MYC), in the enumerated cells per sample, ROC curves were generated to confirm the accuracy of diagnosis of each mean (Fig. 2). Sensitivity and specificity were computed for each mean at the best. The area under the ROC curve (AUC) of each grade was calculated for the diagnosis of a certain CIN type or worse with certain critical value (Tables IV–VI). According to the AUC values calculated, the comparison of hTERC, c-MYC and cytology in discriminating certain a CIN type or worse is shown in Table VII. Cytological diagnosis involved digitization as follows. negative for intraepithelial or malignant (NILM) cervical cytology, 0; ASCUS/ASC-H, 1; LSIL, 2; HSIL, 3; and SCC, 4.

Comparison of hTERC detection for the screening of different cervical lesions.

Comparison of cytological detection for the screening of different cervical lesions.

Comparison of hTERC, c-MYC and cytology in discriminating between the different types [or worse (>)] of cervical intraepithelial neoplasia.

The performance of combined testing also was calculated. According to AUC values calculated, the current results indicated that the combined detection of the hTERC and c-MYC genes in cervical epithelial exfoliated cells by the FISH technique could better discriminate between the CIN1 and worse group (Table VIII). Their sensitivity and specificity are shown in Table VIII in detail. ROC curve analysis demonstrated that the sensitivity and specificity for detecting CIN2+ lesions (CIN2 or worse) were 57.01 and 90.62, respectively for testing for hTERC alone; 58.02 and 90, respectively for testing for c-MYC alone; and 60.49 and 92.22, respectively for the combined testing of hTERC and c-MYC.

Comparison of estimated SEN, SPE with hTERC, c-MYC and cytology in discriminating between different types of cervical intraepithelial neoplasia lesions.

Cervical cancer is the principal cause of mortality due to cancer in women worldwide. The 5-year survival rate ranges from 15–80%, depending on the extent of the disease (38). Novel predictive markers may increase survival rates by improving the treatment of patients at high risk for cancer. Pre-invasive disease can be detected by cervical cytology. All currently available cytology technologies rely on the visual analysis of exfoliated cells from the uterine cervix. Improvement of conventional cytological screening has been proposed by the introduction of molecular-based markers applied to liquid-based cytology (LBC), the suspension of cells collected from the cervix (39).

Zhang et al (2) analyzed copy number alterations of several oncogene loci in a panel of 84 cervical tumors. c-MYC at 8q24 was included. The amplification of c-MYC was detected in 25% of tumors, using interphase FISH. The increased protein expression of c-MYC was observed in tumors with the corresponding gene amplification. c-MYC may have critical biological impact on the development and progression of carcinoma of the uterine cervix. In an internal study, Sokolova et al (36) assessed FISH probes to the 3q26 and the 8q24 regions on a new set of 100 biopsy cases. Experimentation revealed that the 3q26 and the 8q24 regions had the highest frequency of copy number gains in samples with high-grade dysplasia and cancer. Specifically, the 3q26 probe was positive in 100% of cancer specimens, 90% of CIN3 specimens, 78% of CIN2 specimens, 26% of CIN1 specimens, and 0% of normal specimens. The 8q24 probe was positive in 100, 95, 96, 26 and 5% of cancer, CIN3, CIN2, CIN1 and normal cases, respectively. The increasing trend was in agreement with our findings. Our study indicated that the amplification of c-MYC was 6.25% in normal or cases of inflammation, 19.23% in CIN1, 37.93% in CIN2, 61.11% in CIN3 and 87.50% in carcinoma cases. ROC curve analysis demonstrated that the AUC value of c-MYC gene detection for the screening of cervical lesions ≥CIN3 was >0.8 and the AUC values for screening of cervical lesions of other grades were >0.7, indicating the moderate diagnostic results of this indicator. When the abnormal amplification rate of c-MYC was >10, cervical lesions ≥CIN3 were better diagnosed (sensitivity, 87.50%; specificity, 76.77%). Furthermore, our study revealed that using FISH to detect the amplification of hTERC had a bigger AUC for the diagnoses of different cervical lesions than the detection of c-MYC.

In the present study, there were a significant number of cases with marked discrepancies in the interpretation between the cytological and histological diagnoses of the simultaneously sampled Pap smears and biopsy specimens. These discrepancies between the cytological and histological diagnoses are likely to be attributed to sampling error rather than interpretation error. Although the amplification of hTERC or/and c-MYC results in the discrepant cases also showed discordance between the liquid-based cytology Pap smears and biopsy specimens, our data reveals that using FISH to detect the amplification of hTERC or/and c-MYC on cervical epithelial exfoliated cells may be as a useful and specific screening method in pre-cancerous lesions and may be helpful in arbitrating some diagnostic disagreements, although obtaining additional biopsies or Pap smears may eliminate these discrepancies. 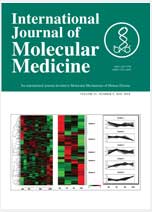