Both transforming growth factor (TGF)-ß and the non-receptor tyrosine kinase Src play major roles during tumorigenesis by regulating cell growth, epithelial-to-mesenchymal transition (EMT), migration/invasion and metastasis, but little is known about the signaling crosstalk between them. To interfere with Src function in vitro and in vivo many studies have employed the pharmacologic Src inhibitors PP2 and PP1. Both agents have recently been shown to be powerful inhibitors of TGF-ß receptor type I/ALK5 and type II. As this situation prohibited any definite conclusions with respect to the relative contribution of TGF-ß vs. Src signaling, we decided to reappraise a potential role of Src in TGF-ß1-mediated cellular responses using RNA and dominant-negative (dn) interference to block Src expression and function, respectively. In TGF-ß-responsive pancreatic ductal adenocarcinoma (PDAC) cells, we show that Src is activated by TGF-ß1 and that its specific inhibition strongly attenuated basal proliferation and enhanced TGF-ß1-mediated growth arrest. However, Src inhibition was unable to impair TGF-ß1-controlled EMT as evidenced by cell morphology and regulation of the epithelial marker E-cadherin. Despite its dispensibility for TGF-ß-induced EMT, specific inhibition of Src dramatically reduced basal and TGF-ß1-induced cell migration in Panc-1 cells as measured with a novel real-time migration assay (xCELLigence DP system). Biochemically, dnSrc inhibition failed to block TGF-ß1/ALK5-induced activation of Smad2 and Smad3, but partially inhibited transcriptional activation of TGF-ß/Smad-responsive reporter genes, and effectively blocked basal and TGF-ß1-induced activation of p38 MAPK. Together, the data provide evidence for a role of Src in the regulation of basal proliferation as well as in basal and TGF-ß1-mediated cell motility but not EMT in TGF-ß-responsive pancreatic (tumor) cells. 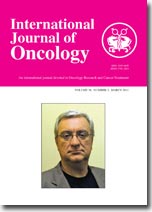