Statins are effective cholesterol-lowering drugs that exert pleiotropic effects, including cytotoxicity to cancer cells. We previously reported that simvastatin triggered the mitochondrial apoptotic pathway in MethA fibrosarcoma cells, which was accompanied by the translocation of stabilized p53 to the mitochondria. In this study, we investigated whether statins induce the endoplasmic reticulum (ER) stress response and the mechanisms by which this response is linked to the stabilization of p53 and its translocation to the mitochondria. Statins induced typical ER stress-related proteins, such as BiP/78 kDa glucose-regulated protein (Grp78) and CCAAT/enhancer-binding protein homologous protein (CHOP), as well as the phosphorylation of protein kinase RNA-like endoplasmic reticulum kinase (PERK), eIF2α and JNK. The statin-induced phosphorylation of eIF2α and JNK was inhibited by supplementation with components of the mevalonate pathway, such as mevalonate, farnesyl pyrophosphate (FPP) and geranylgeranyl pyrophosphate (GGPP). Salubrinal, an inhibitor of the dephosphorylation of eIF2α, suppressed the loss of mitochondrial membrane potential and the translocation of stabilized p53 and Bax to the mitochondria; however, SP600125, a JNK kinase inhibitor, did not exert this effect. Furthermore, the eIF2α knockdown sensitized cells to simvastatin-induced apoptosis and the overexpression of a non-phosphorylatable eIF2α-mutant [serine 51(Ser51)/alanine] enhanced the stabilization of p53 and its translocation to the mitochondria in response to simvastatin treatment. Taken together, these data indicate that eIF2α phosphorylation in the context of the ER stress response plays a role in cell survival by counteracting the p53-mediated mitochondrial apoptosis in response to statins.

Statins inhibit β-hydroxy-β-methylglutaryl CoA (HMG-CoA) reductase, which converts HMG-CoA to mevalonate. They are effective cholesterol-lowering drugs and exhibit anti-cancer effects by inducing apoptosis and cell cycle arrest (1). Moreover, the inhibition of the mevalonate pathway by statins causes perturbation of the endoplasmic reticulum (ER) and stress. In response to ER dysfunction, cells combat the stress and restore ER homeostasis by means of the unfolded protein response (UPR), which includes ER-associated degradation and control of translation (2,3). Among various ER responses, eIF2α phosphorylation primarily protects cells from stress by attenuating global translation and specifically upregulating chaperone proteins, although under prolonged and severe stress it leads to apoptosis (4). Statin-induced eIF2α phosphorylation has been shown to protect macrophages from hypoxia-induced cell death (5); however, lovastatin-induced eIF2α phosphorylation has been shown to lead to apoptosis in human head and neck squamous cell carcinoma (6). Elucidating the role of eIF2α phosphorylation induced by statins may lead to the development of novel protective and therapeutic approaches against hypercholesterolemia and cancer.

Under various stress conditions, the tumor suppressor p53 plays a pivotal role in the execution of ER stress-induced apoptosis via the activation of the BH3-only proteins, such as Puma and Noxa, in a transcription-dependent manner (7) and via a transcription-independent pathway; it activates members of the pro-apoptotic Bcl-2 family, such as Bax, Bid and Bak, or their translocation to the mitochondrial membrane (8). In our previous study, we demonstrated that simvastatin induced apoptosis in cancer cells by stabilizing p53 and stimulating its translocation with Bax to the mitochondria, resulting in the release of cytochrome c(9). However, the mechanisms by which the ER stress response, particularly eIF2α phosphorylation, is linked to the p53-mediated mitochondrial apoptotic pathway in statin-induced apoptosis, have not been investigated.

In the present study, we investigated the molecular link between eIF2α phosphorylation in the ER stress response and the p53 transcription-independent mitochondrial apoptotic pathway in the statin-induced apoptosis of MethA fibrosarcoma cells. We report that the eIF2α phosphorylation on serine 51 (Ser51) of the ER stress response attenuates cell death by inhibiting the stabilization of p53 and its translocation to the mitochondria in statin-induced apoptosis.

siRNAs directed against eIF2α and CHOP were purchased from Santa Cruz Biotechnology and transiently transfected into MethA cells using Lipofectamine 2000 (Invitrogen). Stable clones were selected in the presence of 4 μg/ml puromycin and screened by western blot analysis or RT-PCR. Substitution of the residue serine 51 of eIF2α with alanine (Ala) was performed using the QuikChange™ Site-Directed Mutagenesis kit (Stratagene, La Jolla, CA, USA). Briefly, wild-type eIF2α was amplified from MethA cDNA by PCR and cloned into the EcoRI and XhoI sites of pBluescript SK(+) vector (Stratagene). The mutant form of eIF2α was amplified from wild-type eIF2α/pBluescript SK(+) with Pfu polymerase (Intron, Seongnam, Korea) using the following mutagenesis primers and PCR conditions: forward, 5′-gcg aat tca tgc cgg ggc taa gtt gta g-3′; reverse, 5′-cgc tcg agt taa tct tca gct ttg gct t-3′; 18 cycles of 30 sec at 95°C, 60 sec at 55°C and 10 min at 68°C. The PCR product was DpnI (Promega)-treated and transformed into DH5α competent cells and the substitution was confirmed by DNA sequencing. The wild-type and mutant forms of eIF2α were subcloned into the EcoRI and XhoI sites of the pCMV-tag2b vector (Stratagene) and transfected into the MethA cells. Stable clones of the eIF2α wild-type and mutant forms were selected in the presence of 4 mg/ml neomycin and screened by western blot analysis.

To analyze subgenomic content, cells were incubated under the indicated conditions, washed with PBS, fixed with 70% ice-cold ethanol at 4°C for 1 h and stained with 50 μg/ml propidium iodide (PI) (Sigma-Aldrich) containing 100 μg/ml RNase (Sigma-Aldrich) at 37°C for 30 min. DNA content was analyzed by a FACSCalibur (Becton-Dickinson, San Jose, CA, USA). To analyze MMP, cells were washed with PBS and stained with 500 μl of 4 μg/ml rhodamine-123 solution at 37°C for 20 min. They were then incubated with 0.1 mg/ml PI stock solution for 3 min. Incorporation of rhodamine-123 and PI was analyzed by a FACSCalibur. The green fluorescence of rhodamine-123 and the red fluorescence of PI were collected over the range of FL1 and FL2, respectively. All data were calculated using CellQuest software (Becton-Dickinson).

MethA cells were plated (1×105 cells) on poly-L-lysine-coated coverslips (BD Biosciences) and treated with the indicated reagents for 12 or 36 h. Following incubation, the cells were washed with PBS, stained with MitoTracker Red (Molecular Probes, Eugene, OR, USA) for 20 min, washed twice with PBS, fixed, and permeabilized with Cytofix/Cytoperm solution (BD Biosciences) for 20 min at 4°C. The cells were washed with PBS and blocked with PBS containing 1% BSA for 20 min. They were then incubated with primary antibodies (anti-p53 and anti-Bax) diluted in 1% BSA/PBS for 1 h at RT. After washing with PBS 5 times, cells were incubated with anti-rabbit conjugated Alexa 488 (Molecular Probes) for 1 h at RT and stained with 1 μg/ml Hoechst dye (Molecular Probes) for 10 min. After washing with PBS, the coverslips were mounted using Vectashield HardSet (Vector Laboratories, Burlingame, CA, USA) on glass slides and analyzed under a laser scanning microscope (LSM 5; Carl Zeiss, Oberkochen, Germany).

To evaluate the effect of statins on subgenomic content and MMP, we treated MethA fibrosarcoma cells with simvastatin (a natural statin) or lovastatin (a synthetic statin) for 24 h and analyzed DNA fragmentation and changes in MMP. As shown in Fig. 1, both simvastatin and lovastatin induced DNA fragmentation in a dose-dependent manner and disrupted MMP, while these effects were completely inhibited by supplementation with downstream products of the mevalonate pathway, such as mevalonate, FPP and GGPP. Supplementation with squalene, the direct precursor of cholesterol, was ineffective, indicating that the level of cholesterol was not critical for apoptosis (data not shown), but that the key factor was the depletion of isoprenoids of the mevalonate pathway. To investigate whether the statin-induced apoptosis was related to ER stress, we examined several cardinal indicators of ER stress in statin-treated MethA cells by immunoblot analysis (Fig. 1C). We discovered that the CHOP and BiP/Grp78 protein expression was induced and that the phosphorylation of PERK, eIF2α and JNK was increased. These results indicate that statins induce a general ER stress response during apoptosis.

To determine which downstream products of the mevalonate pathway are critical for statin-induced ER stress, we examined the effects of mevalonate, FPP and GGPP supplementation on simvastatin-treated MethA cells. As shown in Fig. 1D, these downstream products of the mevalonate pathway reduced the phosphorylation of eIF2α and JNK, suggesting that the depletion of isoprenoids induced by statins disrupts ER homeostasis.

Several kinases, including PERK, phosphorylate eIF2α on Ser51 in response to various ER stress inducers. To investigate whether the phosphorylation of eIF2α on Ser51 is involved in the statin-induced ER stress response and apoptosis, we examined the effect of the overexpression of the non-phosphorylatable mutant form of eIF2α (Ser51/Ala) on simvastatin-induced apoptosis. The overexpression of the mutant eIF2α (Ser51/Ala) attenuates the eIF2α phosphorylation pathway (10). The flag-tagged wild-type eIF2α-transfected clone was used as the control. Both the DNA fragmentation and MMP loss induced by simvastatin were enhanced in the eIF2α mutant-expressing clone compared to the wild-type-expressing clone (Fig. 4A and B). The effect of the overexpression of the eIF2α mutant on p53 and Bax protein in response to simvastatin was also analyzed by immunoblot analysis. As shown in Fig. 4C, simvastatin treatment induced the phosphorylation of the flag-tagged eIF2α wild-type protein, but not that of the flag-tagged mutant protein. At the same time, simvastatin effectively stabilized p53 and Bax proteins in the flag-tagged eIF2α mutant clone compared with the flag-tagged eIF2α wild-type clone (Fig. 4C). These results indicate that the phosphorylation of eIF2α on Ser51 is responsible for the cell survival effect in the p53-mediated mitochondrial apoptosis of statin-treated MethA cells.

Under stress conditions, p53 is stabilized and acts as a transcription factor for the expression of pro-apoptotic target genes, such as Puma, Noxa, Bax and Bid (11). In addition, cytoplasmic p53 directly activates the mitochondrial apoptotic pathway in a transcription-independent manner; i.e., p53 interacts with the Bcl-2 family members, Bcl-2 or Bcl-xL, leading to the translocation of Bax and Bid to the mitochondrial outer membrane (12). We previously reported that in response to statin, p53 itself is stabilized and translocated along with Bax to the mitochondria, thus activating the mitochondrial apoptotic pathway (9). In the present study, we demonstrate that statins induce the ER stress response in MethA cells by depleting the isoprenyl products of the mevalonate pathway and that the phosphorylation of eIF2α on Ser51 plays a role in promoting cell survival. To our knowledge, this is the first study to demonstrate that the phosphorylation of eIF2α counteracts the stabilization of p53 and its translocation to the mitochondria in statin-induced apoptosis.

Statins exert stress on cancer cells and display various cardinal features of ER stress response, which are pro- or anti-apoptotic. Lovastatin has been shown to induce apoptosis accompanied by reduced global protein translation by inducing eIF2α phosphorylation. It has also been shown to induce general control non-repressed 2 (GCN2)-mediated activating transcription factor (ATF)4 production followed by the increased expression of ATF3 and CHOP in a head and neck squamous cell carcinomas cell line (6). Lovastatin-induced apoptosis was attenuated in CHOP−/− and GCN2−/− murine embryonic fibroblasts (MEFs), thus demonstrating the involvement of ATF4, CHOP and ATF3 in apoptosis. In multiple myeloma cells, lovastatin has been shown to induce BiP/Grp78 and CHOP protein expression, the phosphorylation of eIF2α and apoptosis, as well as the cleavage of poly(ADP-ribose) polymerase (PARP) (13). In contrast to these apoptotic effects of statin-induced ER stress, numerous studies have demonstrated that the ER stress response also attenuates the apoptotic response. Fluvastatin has been shown to induce BiP/Grp78 expression and to activate ATF6 and X-box binding protein-1 (XBP-1), but not CHOP and ATF4 in RAW264.7 cells (5). Among the induced proteins, the induction of BiP/ Grp78 is responsible for the cytoprotective effect of fluvastatin pre-treatment against hypoxia-induced cell death. Simvastatin pre-treatment also exerted a neuroprotective effect by attenuating the ER stress response, with concomitant increases in ATF6 and XBP-1 protein expression during acute ischemia and reperfusion in rats (14). Recently, a novel protective effect of statins against atherosclerosis was proposed based on the finding that stearic acid-induced ER stress in macrophages was attenuated by statins (15). In sum, statins seem to exert differential ER stress responses depending on the strength, nature and duration of the stress. However, we observed that statins induce the majority of indicators of the ER stress response in MethA cells: the early phosphorylation of PERK, eIF2α and JNK and the induction of CHOP and BiP/Grp78 protein expression.

This study was supported by a grant from the Korea Healthcare Technology R&D project, Ministry and Welfare, Republic of Korea (A084773). 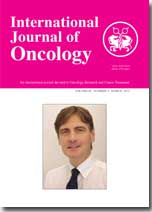