Cancer metastasis is one of the most critical events in cancer patients, and the median overall survival of stage IIIb or IV patients with metastatic lung cancer in the TNM classification is only 8 or 5 months, respectively. We previously demonstrated that Juzentaihoto, a Japanese traditional medicine, can inhibit cancer metastasis through the activation of macrophages and T cells in mouse cancer metastatic models; however, the mechanism(s) through which Juzentaihoto directly affects tumor cells during the metastasis process and which herbal components from Juzentaihoto inhibit the metastatic potential have not been elucidated. In this study, we focused on the epithelial-to-mesenchymal transition (EMT), which plays an important role in the formation of cancer metastasis. We newly determined that only the Cinnamomi Cortex (CC) extract, one of 10 herbal components of Juzentaihoto, inhibits TGF-β-induced EMT. Moreover, the contents of catechin trimer in CC extracts were significantly correlated with the efficacy of inhibiting TGF-β-induced EMT. Finally, the structure of the catechin trimer from CC extract was chemically identified as procyanidin C1 and the compound showed inhibitory activity against TGF-β-induced EMT. This illustrates that procyanidin C1 is the main active compound in the CC extract responsible for EMT inhibition and that procyanidin C1 could be useful as a lead compound to develop inhibitors of cancer metastasis and other diseases related to EMT.

The essential characteristics of cancer are the ability to invade surrounding tissues and metastasize to distal tissues, known as cancer metastasis, which is the major cause of mortality in cancer patients. In non-small cell lung cancer (NSCLC) patients, the median overall survival of patients with metastatic lung cancer (stage IIIb or IV in the TNM classification) is limited (only 8 or 5 months, respectively) (1); therefore, suppression of cancer metastasis results in the improved survival of lung cancer patients.

Cancer metastasis consists of several steps: intravasation, attachment to a vessel, extravasation, angiogenesis and growth in distal tissues (2–5). Among them, epithelial-to-mesenchymal transition (EMT) is involved in an early step of metastasis (6,7). EMT is a phenomenon in which cobblestone-like epithelial cells change into spindle-like mesenchymal cells with down-regulation of epithelial markers such as E-cadherin and also upregulation of mesenchymal markers such as N-cadherin (8). In addition to metastasis, this physiological phenomenon is important for resistance to apoptosis, maintenance of cancer stem cells and production of extracellular matrix. Thus, EMT would be an attractive therapeutic target in metastatic cancers.

Juzentaihoto, which is a Japanese Kampo medicine, has been widely used for the decline of physical strength, general debility, cold hands and feet, fatigue, night sweats, circulatory problems and anemia (9). Interestingly, our previous studies showed that Juzentaihoto indirectly inhibited cancer metastasis through the activation of macrophages and T cells in mouse models (10–12). Although Juzentaihoto could suppress cancer metastasis, it is not well known how Juzentaihoto can directly affect tumor cells during the metastasis process and which herbal ingredients of Juzentaihoto are involved in the regulation of EMT.

Here we firstly report that Cinnamomi Cortex (CC), one of the herbal medicines from Juzentaihoto, inhibits TGF-β-induced EMT phenotypes. After fractionation of CC extract, the content of catechin trimer was well-associated with the inhibitory activities of CC extract. Finally, procyanidin C1 from CC extract is newly identified as the responsible molecule for the EMT inhibition.

Whole cell lysates were collected in lysis buffer supplemented with some protease and phosphatase inhibitors as described previously (13). Equal amounts of protein were resolved by electrophoresis on acrylamide gels and transferred to PVDF membranes. Antibodies against phospho-specific Smad-2 (Ser 465/467), E-cadherin, and N-cadherin were purchased from Cell Signaling Technology (Beverly, MA, USA) and an antibody against PCNA was purchased from Santa Cruz Biotechnology (Santa Cruz, CA, USA).

Cell morphology was determined by BZ-8000 (Keyence, Osaka, Japan) after staining with hematoxylin and eosin. For the migration assay, Transwell cell culture chambers were used as described previously (14). Briefly, the filters were precoated with 1.25 μg fibronectin on the lower surfaces. The cell suspension (3×104 cells/100 μl) in serum-free medium was added to the upper compartment and incubated for 6 h. The migrated cells were stained with hematoxylin and eosin, and counted under the microscope in three predetermined fields at a magnification of ×400.

Fractionation of CC and identification of procyanidin C1 from CC

For chemical profiling of 7 CC extracts, liquid chromatography-mass spectrometry (LC-MS) analysis was performed with a Shimadzu LC-IT-TOF mass spectrometer (Kyoto, Japan) equipped with an ESI interface (Shimadzu). The ESI parameters were as follows: source voltage +4.5 kV, capillary temperature 200°C and nebulizer gas 1.5 l/min. The mass spectrometer was operated in positive ion mode scanning from m/z 200 to 2,000. A Waters Atlantis T3 column (2.1 mm i.d. × 150 mm, 3 m; Milford, MA, USA) was used and the column temperature was maintained at 40°C. The mobile phase was a binary eluent of (A) 5 mM ammonium acetate solution and (B) CH3CN under the following gradient conditions: 0–30 min linear gradient from 10 to 100% B, 30–40 min isocratic at 100% B. The flow rate was 0.15 ml/min. Mass spectrometry data obtained from the extract were deposited in the MassBank Database and stored with pharmacological information on the extract in the Wakan-Yaku Database System, Institute of Natural Medicine, University of Toyama.

Our previous studies showed that Juzentaihoto, a Japanese Kampo medicine, prevents metastasis in mouse models (10–12). Because Juzentaihoto contains ten (‘Ju’ means ‘ten’ in Japanese) kinds of herbal ingredients, we thus investigated whether each component can suppress TGF-β-induced EMT. We firstly screened the expression of an epithelial marker, E-cadherin, in a human non-small-cell lung cancer cell line, A549 cells, treated with TGF-β, TGF-β receptor kinase inhibitor (TGFRi), or herbal medicines (Fig. 1A). Known as EMT, the reduction of E-cadherin expression in A549 cells was detected after TGF-β treatment in A549 cells. Among the ten herbal components, only Cinnamomi Cortex (CC) extract strikingly suppressed TGF-β-induced EMT, as indicated by the restoration of E-cadherin. We could not detect any inhibition of the cell viabilities by CC extract (data not shown).

In order to further determine the inhibition of TGF-β-induced EMT by CC extract, E-cadherin, N-cadherin, and phosphorylated Smad-2 were examined. Similarly to Fig. 1A, restoration of E-cadherin expression by CC extract was detected in a concentration/time-dependent manner (Fig. 1B and C). Interestingly, phosphorylation of Smad-2 by TGF-β, a downstream molecule of TGF-β signaling, was suppressed by CC extract after the early phase (10 and 20 min) as well as the late phase (24 and 48 h). We also detected the inhibition of TGF-β-induced EMT by CC extract at mRNA levels of snail, E-cadherin and fibronectin (data not shown). In addition to expression levels of EMT markers, we observed morphological changes with CC extract (Fig. 1D). A549 cells treated with TGF-β showed spindle-like shapes as compared with untreated cells. On the other hand, TGF-β-stimulated cells treated together with CC extract showed cobblestone-like shapes similar to the untreated cells or the cells with TGFRi and TGF-β. Moreover, consistent with cell morphology, TGF-β-induced cell migration was also suppressed with CC extract (Fig. 1E). These results support that CC extract suppresses TGF-β-induced EMT in A549 cells and consequently inhibits cell migration.

To gain insight into the variations of CC extracts in EMT-inhibitory activities, we examined six additional CC (CC-1 to -6) extracts, which differ according to the harvest location (Fig. 2A). CC-2, CC-3 and CC-5 extracts showed restoration of E-cadherin expression stronger than CC-1, CC-4, and CC-6 extracts; therefore, an active component(s) for the inhibition of EMT might be included in CC-2, CC-3 and CC-5 extracts more than in CC-1, CC-4 and CC-6.

In this study, we firstly identified Cinnamomi Cortex (CC) extract in 10 herbal components from Juzentaihoto as the only inhibitory herbal ingredient of TGF-β-induced epithelial-to-mesenchymal transition (EMT) in a human non-small cell lung cancer cell line, A549 cells. The inhibitory effects of CC extracts could be derived from the procyanidin C1 because of the correlation of the content of procyanidin C1 in CC extract with their inhibitory activities.

The inhibitory effect of CC extract on EMT phenotypes we showed here might be supported by the evidence gained from Ninjinyoeito and Keishibukuryogan, both of which are other Kampo medicines containing CC. Ninjinyoeito has also been reported to suppress cancer metastasis (16). On the other hand, Keishibukuryogan has been shown to suppress renal fibrosis, which is caused by TGF-β-induced EMT (17). Despite the inhibitory activity of CC extract, the possibility can not be excluded that other herbal medicines might play a role in concert with CC extract, because of the harmonization effects among various herbal medicines (11,12).

Collectively, our data identified CC in Juzentaihoto as the only herbal component inhibiting TGF-β-induced EMT, which could be worthy of clinical study in a variety of settings associated with EMT, including cancer metastasis and/or tissue fibrosis. As procyanidin C1 showed inhibition of EMT, it is suggested that the utilization of procyanidin C1 as a lead compound would be attractive for the development of cancer metastasis inhibitors.

This study was supported in part by Grants-in-Aid for Challenging Exploratory Research 24659348 (I.S.), by Grant-in-Aid 24700971 for Young Scientists (B) (S.Y.) from the Ministry of Education, Culture, Sports, Science, and Technology (Japan) and by a Grant-in-Aid for the Cooperative Research Project from Joint Usage/Research Center (Joint Usage/Research Center for Science-Based Natural Medicine), Institute of Natural Medicine, University of Toyama in 2013. 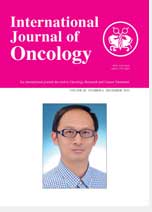