Telomerase is the ribonucleoprotein enzyme that maintains telomeres of eukaryotic chromosomes. Activation of telomerase is a common feature of the majority of human cancers, and inhibition of this enzyme has been proposed as a novel target for cancer therapeutics. Here, we investigated the effects of telomerase inhibition in the non-small cell lung cancer cell line NCI-H460, using a genetic approach by ectopic expression of dominant-negative (DN)-hTERT. Five clones were selected in which telomerase activity was completely abolished. As a result, telomere erosion was observed leading to proliferation arrest after a lag period of 20-28 population doublings. Although overall telomere length was similar between the different clones as measured by quantitative fluorescence in situ hybridization (Q-FISH), striking differences were found in telomere length of individual chromosomes. In particular, lack of individual telomeres and formation of end-to-end fusions were variable. Interestingly, this level of individual telomere dysfunction was positively correlated with the remaining life span of the different clones in vitro. In addition, the amount of telomere dysfunction induced by DN-hTERT was twice as high compared to the small molecule telomerase inhibitor BIBR1532, which induced growth arrest after >100 population doublings. Thus, pharmacological strategies that aim at inhibition of telomerase in cancer cells should take into account that not only overall telomere shortening, but rapid induction of a high level telomere dysfunction appears to be the crucial surrogate parameter for the development of future telomerase-based therapeutics. 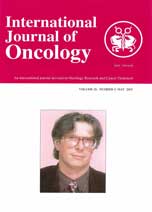