β-elemene has recently raised interest in P.R. China as a novel antitumor plant drug isolated from the Chinese medicinal herb Zedoary. To explore potentially useful combinations of β-elemene with taxanes in the clinic, we characterized the effects of β-elemene combined with taxanes in human lung cancer cells using a median effect analysis, micronucleus assay, apoptotic detection, and determination of gene expression in the signaling pathways of apoptosis. The synergistic analysis indicated that the interactions of β-elemene with paclitaxel or docetaxel ranged from slight synergism to synergism. Combinations of β-elemene with docetaxel induced much stronger synergistic interactions in p53 mutant H23 cells and p53 null H358 cells than in p53 wild-type H460 and A549 cells. Similar synergistic interactions were observed by micronucleus assay, apoptotic detection, and determination of apoptotic gene expression. Our findings indicate that the synergistic effects achieved with combinations of β-elemene and taxanes are related to the augmented cytotoxic efficacy of taxanes owing to the action of β-elemene. In H460 and A549 cells, dose-dependent upregulation of p53 protein expression was observed in cultures treated with docetaxel alone and with docetaxel plus β-elemene, whereas no significant change in p53 expression was observed in any of the treatment groups in H23 cells. Fas revealed no alteration of expression with any of the treatments in this study. However, the combination treatments induced increased cytochrome c release from mitochondria, significant caspase-8 and -3 cleavage, and downregulation of Bcl-2 and Bcl-XL expression. These results suggest that, although p53 plays an important role in taxane-induced cell death, apoptosis induced by β-elemene or in combination with docetaxel thereof seems to be initiated through a p53- and Fas-independent pathway via mitochondria in our lung cancer cells. The suppression of specific ‘survival’ gene expression appears to be the key action leading to the synergistic effect of combination treatments with β-elemene and taxanes. Finally, the β-elemene-induced alteration of cell membrane permeability, which has potential to result in enhanced cellular uptake of taxanes, may also contribute to the synergistic interactions of the combination treatments. 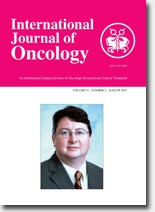