Colorectal cancer is a major cause of cancer-related mortality worldwide, with a high incidence of recurrence following curative resection, particularly among patients with stage II and III disease. There is therefore a need for novel prognostic biomarkers for advanced colon cancer and it was recently reported that aquaporin‑1 (AQP1) may be associated with aggressive characteristics of colon cancer cells in experimental data. the association of clinicopathological findings with AQP1 expression was evaluated by tissue microarray (TMA) analysis, to determine whether AQP1 is a prognostic biomarker for colon cancer. A total of 120 consecutive stage II and III colon cancer patients (51 with stage II and 69 with stage III) who underwent curative resection between 1997 and 2008 were analyzed. The TMA was prepared from archival formalin‑fixed, paraffin‑embedded tissue blocks. Immunostaining was graded semi‑quantitatively by considering the staining intensity and the percentage of positive tumor cells. Results showed the AQP1‑positive rate to be 35.8%. The expression of AQP1 was associated with lymph node metastasis, lymphovascular and vascular invasion. The 5‑year survival rate of the AQP1‑positive and -negative groups was 73.7 and 87.9%, respectively. the survival rate of the positive group was significantly lower compared to that of the negative group (P=0.030). Furthermore, the expression of AQP1 was an independent poor prognostic factor according to the multivariate analysis. therefore, AQP1 may be a promising candidate as a prognostic biomarker for colon cancer.

Colorectal cancer is a major cause of cancer-related mortality worldwide, causing ∼500,000 deaths annually (1). Following curative resection, there is a considerable risk of recurrence in patients with stage II and III disease. Recurrence occurs in ∼20% of stage II patients and ∼50% of the stage III patients may be cured with surgery alone (2–5). Therefore, it is critical to identify patients with a high risk of recurrence.

Aquaporins (AQPs) are a family of small membrane transport proteins that assemble in cell membranes as tetramers and primarily act as water-selective pores that facilitate the osmotically-driven transport of water across plasma membranes (6,7).

AQP1 is expressed in vascular endothelial cells throughout the body is not expressed in the central nervous, genital, lymphoid and gastrointestinal systems, including the colonic mucosa (8,9). It was reported that several types of cancer express AQP1 and it may be involved in carcinogenesis (10,11). An in vitro study demonstrated that AQP1-mediated plasma membrane water permeability is crucial for colon cancer cell migration and may be associated with tumor invasion and metastasis (12). However, available data on the clinical significance of AQP1 in colon cancer are limited. In the present study, the association of AQP1 expression in colon cancer with clinicopathological findings was evaluated using tissue micro-array (TMA) analysis and it was demonstrated that AQP1 is a prognostic factor for advanced colon cancer.

A total of 168 consecutive stage II and III colon cancer patients who underwent curative resection between January, 1997 and August, 2008 were investigated. The final stage was pathologically confirmed according to the International Union Against Cancer (UICC) classification system, 7th edition. The degree of lymphovascular and vascular invasion was classified as negative, mild or severe by the pathologists of our hospital. Patients with rectosigmoid cancer were included in this study. Tissue microarrays were prepared from each tumor and a representative area was carefully selected from a hematoxylin and eosin (H&E)-stained section. A total of 120 patients (51 cases with stage II and 69 cases with stage III disease) with no other causes of death were subjected to statistical analysis.

A TMA is composed of small 1.0-mm cores of tissue obtained from paraffin blocks. For tissue stamping, the tumor areas were marked on H&E-stained sections and then marked directly on the corresponding formalin-fixed, paraffin-embedded tissue blocks. Paraffin-embedded tumor material was cut into 4-μm sections and placed onto glass slides, followed by staining with H&E and anti-AQP1 antibody (H-55; Santa Cruz Biotechnology, Inc., Santa Cruz, CA, USA) at a 1:100 dilution. Immunostaining of the TMAs was graded semi-quantitatively by considering the staining intensity and the percentage of positive tumor cells by two pathologists who were blinded to the clinicopathological variables. The staining intensity was scored using three grades as follows: 0, no staining of cancer cells; 1, weak staining; and 2, strong staining. The percentage of stained tumor cells was classified on a scale of 3 grades: 0, no positive cells; 1, <50% positive cancer cells; and 2, >50% positive cancer cells (Fig. 1). The AQP1 expression by the tumor was defined as positive when the sum of the intensity and the extent scores was ≥3 and as negative when the score was <3.

The JMP-9 software package was used for statistical analysis. AQP1 expression was analyzed as nominal data. The association between AQP1 expression and clinicopathological characteristics was analyzed using the χ2 test or the two-sided Student’s t-test, as appropriate. Survival was assessed by the Kaplan-Meier method and compared by the log-rank test. The multivariate analysis was performed using Cox’s proportional hazards model to evaluate risk factors for cancer-related mortality. P<0.05 was considered to indicate a statistically significant difference.

Association between patient characteristics and AQP1 expression in colon cancer.

a Aquaporin-1 (AQP1) expression was defined as positive when the sum of the intensity and the extent scores was 3/4 and as negative when the score was 0–2. The AQP1 expression exhibited a significant correlation with lymph node metastasis (P=0.042), severe lymphovascular invasion (P=0.012) and vascular invasion (P=0.017). The AQP1 expression was also higher in left-sided compared to right-sided colon cancer (P=0.038). Only 1/10 of poorly differentiated adenocarcinomas expressed AQP1, although the difference was not statistically significant. Right, ascending and transverse colon; Left, descending and sigmoid colon; Muc, mucinous carcinoma; Sig, signet ring cell carcinoma; CEA, carcinoembryonic antigen; CA, carbohydrate antigen.

The AQPs are a family of small (∼30-kDa monomers) membrane transport proteins that assemble in cell membranes as tetramers and primarily act as water-selective pores, facilitating the osmotically-driven transport of water across plasma membranes (6,7). Recently, various studies have focused on the association of AQPs and cancer (10–17).

AQP1 is expressed in vascular endothelial cells throughout the body, except in the normal central nervous, genital and lymphoid systems. This molecule is also not expressed by normal colonic epithelial glands (6–9). It was reported that several types of cancer express AQP1 and it may be involved in tumor invasion and metastasis. Hu et al (13) demonstrated that AQP1 expression by tumor cells may increase local invasiveness and the ability to metastasize by comparing B16F10 melanoma and 4T1 breast tumor mouse cell lines with or without AQP1 expression. The results of that study demonstrated that AQP1 expression increased the water permeability of the plasma membrane and the migration of cancer cells in vitro.

The possibility of targeting AQP1 for the treatment of colon cancer was recently suggested. Bin et al (17) reported that acetazolamide, a carbonic anhydrase inhibitor (Diamox®) that is used to treat glaucoma and epilepsy, inhibited AQP1 expression and colon cancer xenograft tumor growth. Therefore, AQP1 may be a prognostic factor as well as a treatment target in colon cancer.

In conclusion, the expression of AQP1 is associated with characteristics of progression of colon cancer, such as lymph node metastasis and lymphovascular invasion and is a poor prognostic factor for advanced colon cancer. These clinical results are consistent with previous experimental findings that support the association of AQP1 with factors such as tumor growth, invasiveness and metastasis. Therefore, AQP1 is a molecule that requires further investigation regarding the prognostic evaluation and treatment of colon cancer.

This study was supported by grants from the Ministry of Education, Culture, Sports, Science and Technology of Japan. 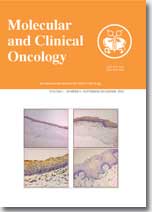