Clinicopathological significance of CD133 in lung cancer: A meta‑analysis

CD133 is one of the most commonly used markers of lung cancer stem cells (CSCs), which are characterized by their ability for self‑renewal and tumorigenicity. However, the clinical value and significance of CD133 in lung cancer remains controversial. Due to the limited size of the individual studies, the association between CD133 and the clinicopathological characteristics of lung cancer had not been fully elucidated. A meta‑analysis based on published studies was performed with the aim of evaluating the effect of CD133 on the clinicopathological characteristics of lung cancer and to investigate the role of CSCs in the prognosis of lung cancer. A total of 15 eligible studies were included in this meta‑analysis and our results indicated that a positive CD133 expression was significantly associated with poor differentiation and lymph node metastasis, although it was not associated with tumor stage or histological type. Therefore, CD133 may be considered as a prognostic maker of lung cancer. Further clinical studies, with larger patient samples, unified methods and cut‑off levels to detect CD133 expression, classified by tumor stage, therapeutic schedule, follow‑up time and survival events, are required to determine the role of CD133 in clinical application and the association between CD133 and the prognosis of lung cancer.

Lung cancer remains the most common cause of cancer-related mortality worldwide (1). Patients affected by lung cancer exhibit a poor prognosis. Despite the significant advances in surgical techniques, chemotherapy and radiotherapy, the relapse rate is high and only a few patients achieve long-term survival, with an overall 5-year survival rate of ∼15% (2). Evidence supports the cancer stem cell (CSC) hypothesis, according to which CSCs may be responsible for tumor initiation, metastasis, recurrence and resistance to treatment (3,4). Due to the characteristics of CSCs, the conventional therapies are unable to effectively eliminate these cells. The residual CSCs continue to proliferate, leading to the relapse of cancer. A variety of molecules have been investigated as putative markers of CSCs in malignancies, including lung cancer (5). Among the various markers, CD133 is one of the most commonly used. It is widely expressed in a number of malignancies, such as glioblastomas (6), hepatocellular (7), ovarian (8), colon (9) and lung (10) carcinomas.

A growing number of CD133-positive cancer cells have been identified in lung cancer (11,12). Eramo et al (10) observed that a rare population of CD133-positive cancer stem-like cells were able to self-renew and generate an unlimited progeny of non-tumorigenic cells, whereas the CD133-negative cancer cells lacked this potential. However, the association between CD133 expression and the clinicopathological characteristics of lung cancer remains unknown. Attempts to elucidate the association between CD133-positive cancer cells and clinicopathological characteristics in previous studies yielded controversial results (13,14). The limited sample availability resulted in discrepancies regarding the clinical significance determined by different CSCs studies. Therefore, we performed a systematic review of the literature with a meta-analysis to determine the association between CSCs marker CD133 and the clinicopathological characteristics of lung cancer and to investigate the role of CSCs in the prognosis of lung cancer.

Studies were identified via an electronic search through Medline, EMBASE and the China National Knowledge Infrastructure (CNKI) databases, using the key words ‘lung cancer’ and ‘CD133’, completed by the personal bibliography of two of the authors (Yaoxi Tan and Bo Chen). The bibliographies reported in all the identified studies were used to complete the study search. Review articles were scanned to identify additional eligible studies. The search was completed on November 15, 2012. To be eligible for inclusion in this systematic review, a study was required to meet the following criteria: i) it only included patients with primary lung cancer; ii) it investigated the association between CD133 and clinicopathological characteristics; iii) it was published as a full-text article in English or Chinese and; iv) it reported the number of CD133-positive and -negative patients. When duplicate studies were published, only the most recent or most informative was included in the analysis, to avoid overlap between cohorts.

The following information was extracted from each study: i) year of publication and first author’s name; ii) sample size, test method and cut-off level; iii) tumor data including stage, grade, histological type and lymph node metastasis. Information was carefully extracted from all the eligible studies independently by two of the authors of the present study (Yaoxi Tan and Bo Chen). Differences in the extraction of data were assessed by a third investigator (Jianqing Wu).

To assess the association between CD133 and the clinicopathological characteristics of lung cancer including stage, grade, histological type and lymph node metastasis, odds ratios (ORs) with 95% confidence intervals (CIs) were calculated. The heterogeneity of combined ORs was initially evaluated by graphical examination of the forest plots. Statistical assessment was then performed using a χ2-based test of homogeneity and evaluation of the inconsistency index (I2) statistic. The I2 statistic was defined as the percentage of variability due to heterogeneity rather than chance, with values >50% representing the possibility of substantial heterogeneity (15). P<0.05 was considered to indicate a statistically significant difference. If no obvious heterogeneity existed, the OR was calculated by the fixed-effects model (the Mantel-Haenszel method) and χ2 tests. Otherwise, the random-effects model (the DerSimonian-Laird method) was used. In addition, evidence of publication bias was determined using the Egger’s (16) and Begg’s methods (17). All the calculations were performed using the Stata statistical software version 12.0 (StataCorp, College Station, TX, USA).

Main characteristics of the 15 eligible studies.

Main results of the meta-analysis

Correlation of CD133 with tumor stage

Among the selected studies, 8 analyzed the association between CD133 and tumor stage. Cortes-Dericks et al (18) and Li et al (21) observed that positive CD133 expression exhibited a significant association with tumor stage. Of the 8 studies, one study (22) was limited to stage I and one study (19) assessed patients with stage I–II disease. Two studies (13,21) were performed on stage I–IV lung cancer of different histological types. Excluding the four studies mentioned above, we performed a meta-analysis of the studies which investigated stage I–III cancer. A comparison of stage I–II to stage III revealed that there was no association between a positive CD133 expression and tumor stage (pooled OR=0.78, 95% CI: 0.44–1.41 and P=0.411) (Fig. 1). There was no evident publication bias (Egger’s test, P=0.089), a finding also supported by the Begg’s funnel plots (figure not shown).

Correlation of CD133 with tumor differentiation

Correlation of CD133 with histological type

Several studies (14,18,21,23,25–27) reported that CD133 expression was correlated with poor prognosis in lung cancer, whereas other authors (13,19,22,28) observed no such association. The patient populations varied among these studies. For example, Herpel et al (19) conducted the study on previously untreated stage I–II NSCLC patients, while Shien et al (23) investigated patients with locally advanced N2 or N3 NSCLC, who underwent induction CRT followed by surgery. The methods used to detect CD133 expression were also different, including IHC, RT-PCR and tissue microarray. Even among the studies using IHC, the cut-off level and the antibodies used varied widely. In addition, certain studies reported disease-free survival, whereas others reported overall survival with different follow-up times. Therefore, due to these considerable differences, we were not able to directly perform a systematic review to assess the correlation between CD133 expression and the prognosis of lung cancer.

The studies mentioned previously provided important information regarding the indirect prognostic value of CD133 and the therapy targeting CSCs in lung cancer. Eramo et al (10) observed that CD133-positive stem-like cancer cells were capable of self-renewal. The injection of immunocompromised mice with CD133-positive lung cancer cells readily generated tumor xenografts phenotypically identical to the original tumor, leading to the conclusion that CD133 was a reliable marker of lung cancer. We inferred that there was a larger percentage of CSCs in the majority of lung cancer tissue, with a higher number of CD133-positive lung cancer cells. One of the properties of CSCs was the ability to undergo asymmetrical division, leading to pluripotential differentiation and metastasis (28). This finding was consistent with the results of our meta-analysis, suggesting that a positive CD133 expression was clearly associated with poor tumor differentiation and lymph node metastasis. Poor differentiation and metastasis were significantly associated with poor survival of cancer. In brief, positive CD133 expression was most likely correlated with poor prognosis of lung cancer. It should also be noted that, since CD133 positivity was correlated with the expression of resistance-related proteins (28), the proportion of CSCs in patients who had received radiotherapy and/or chemotherapy was higher compared to that in patients who received surgery alone. As a result, it was not clear whether CD133 expression was of higher prognostic value in patients who received radio-therapy and/or chemotherapy. Further studies are required to elucidate the direct association between CD133 expression and the prognosis of lung cancer.

A meta-analysis is a quantitative approach in which individual study findings on the same topic are statistically integrated and analyzed. With more samples, the results of a meta-analysis are more reliable compared to those of a single study. However, the present meta-analysis had certain limitations. When analyzing whether CD133 expression was associated with tumor differentiation or lymph node metastasis, there was significant heterogeneity. The methods used to detect CD133 expression varied widely among the studies and heterogeneity was eliminated following exclusion of the studies that did not use IHC. Although IHC was the most commonly applied method, the cut-off level was defined differently among the studies. In addition, the IHC results were based on the primary antibody used and different antibodies were used by the eligible studies. The dilution of the antibody also varied, leading to differences in the sensitivity of the method, depending on the antibody concentration. Another factor was the effect of ethnicity. The majority of the studies included were conducted on Asian patients. There is the possibility that different ethnic groups exhibit differences in CD133 expression, leading to heterogeneity and bias.

Although there was no evident publication bias in this meta-analysis, we were not able to completely exclude biases. For example, the study was restricted to studies published in English and Chinese, which may lead to bias.

This study was a project funded by the Priority Academic Program Development of Jiangsu Higher Education Institutions and also supported by the National Natural Science Foundation of China (no. 81272602). 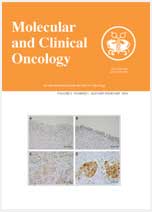