Recently, there have been important developments in minimally invasive full‑thickness resection of subepithelial tumors (SETs) of the upper gastrointestinal tract. However, there remain challenges with techniques such as laparoscopy‑endoscopy cooperative surgery (LECS) and non‑exposed endoscopic wall‑inversion surgery (NEWS). The aim of the present study was to further investigate the feasibility, efficacy and safety of laparoscopy‑assisted endoscopic full‑thickness resection (ETFR) of SETs and to evaluate the clinical outcomes. This retrospective study included 16 patients with upper gastrointestinal SETs who underwent laparoscopy‑assisted EFTR between July 2016 and December 2017. The patient characteristics, surgical outcomes, postoperative course, results of the histopathological examination and short‑term outcomes were reviewed and analyzed. A total of 10 patients in the LECS group and 6 patients in the NEWS group presented with SETs in the stomach (15 cases) or duodenum (1 case). The mean tumor size in the LECS group (5.6 cm) was larger compared with that in the NEWS group (2.1 cm). R0 resection was achieved in all patients, without adverse events or tumor recurrence. The NEWS group exhibited a lower white blood cell count and C‑reactive protein level on the first postoperative day, reflecting the less prominent inflammatory response, less bleeding and shorter hospitalization. Therefore, laparoscopy‑assisted EFTR by LECS and NEWS is a feasible and safe minimally invasive treatment option for upper gastrointestinal SETs in selected patients.

The term subepithelial tumor (SET) is clinically used for protuberant lesions covered by an intact mucosa (1). The distribution of SETs in the upper gastrointestinal tract varies among different reports, with the stomach being the organ most frequently involved (2-4). SETs were previously referred to as submucosal tumors (SMTs). SETs are classified into non-neoplastic and neoplastic lesions. The majority of the lesions are asymptomatic. However, carcinoid tumors, lymphomas, glomus tumors and gastrointestinal stromal tumors (GISTs) may be malignant or have malignant potential (5,6).

Recently, there have been important developments in minimally invasive full-thickness resection for SETs of the upper gastrointestinal tract, but there remain certain challenges. Laparoscopy-assisted endoscopic full-thickness resection (EFTR) techniques, such as laparoscopic-endoscopic cooperative surgery (LECS) and non-exposed endoscopic wall-inversion surgery (NEWS), are the most common procedures, but their applicability remains a matter of debate. LECS is a safe procedure that allows for very precise resection, preventing unnecessary and excessive resection (7-11). NEWS carries the major advantage of being highly accurate in determining the resection line with no risk of peritoneal contamination, and avoids exposure of the tumor into the peritoneal cavity, and it is is feasible for SETs <3 cm in greatest diameter (8-17). To the best of our knowledge, our group reported the first case on NEWS of the stomach (18) and first part of the duodenum in Thailand (19). The aim of the present study was to further investigate the feasibility, efficacy and safety of laparoscopy-assisted EFTR for upper gastrointestinal SETs and to evaluate the clinical outcome.

Patients with upper gastrointestinal SETs who were referred to the Department of Surgery, Faculty of Medicine, Thammasat University (Pathumthani, Thailand) between July 2016 and December 2017 and were identified in our electronic documentation system, were included in this retrospective study. The study protocol was approved by the Human Ethics Committee of Thammasat University (Faculty of Medicine); reference no. MTU-EC-SU-1-170/60. All patients included in this study provided their consent to the use of their clinical data for scientific and academic purposes.

The SETs were treated according to the National Comprehensive Cancer Network (20), the European Society for Medical Oncology (21) and the Asian consensus guidelines for the diagnosis and management of gastrointestinal stromal tumors (22). The inclusion criteria for laparoscopy-assisted EFTR were SETs ≥2 cm and SETs <2 cm with high-risk endoscopic ultrasound characteristics, including irregular border, cystic spaces, ulceration, echogenic foci and heterogeneity. Patients who were not deemed suitable for laparoscopy and endoscopic resection were excluded.

The location and local invasion of tumors were evaluated with upper gastrointestinal endoscopy and abdominal computed tomography. The patients were informed of multiple treatment options and consented to undergo endoscopy and laparoscopic surgery. The patients who had SET without evidence of lymph node and/or distant metastasis and who underwent laparoscopy-assisted EFTR (LECS and NEWS) were enrolled in the present study. LECS was conducted for tumors >3 cm in diameter on preoperative imaging, whereas NEWS was performed for tumors <3 cm, as the tumors were removed perorally using an endoscopic retrieval device (9,13,14).

Briefly, the LECS procedure was performed as follows: The lesion was identified and the mucosal markings created using endoscopy. Next, the laparoscopic outer serosal markings opposite to the previously created inner mucosal markings were incised. The lesion was circumferentially resected by endoscopic mucosal and submucosal dissection, followed by laparoscopic seromuscular resection. The lesion was removed through the abdominal incision. The resection defect was closed by full-thickness suturing with the hand-sewn technique in the lesser curvature close to the esophagogastric junction and the pylorus. In other areas, it was closed using a laparoscopic linear stapling device (Fig. 1).

Briefly, NEWS was performed as follows: Several endoscopic mucosal markings were created around the subepithelial mass, and several serosal markings were made using a laparoscopic technique on the opposite side. The injection solution was prepared with Glyceol and a small amount of indigo carmine dye. The solution was endoscopically injected into the submucosal layer. A circumferential seromuscular incision was carefully performed, and was continuously sutured to invert the lesion into the lumen. During suturing, a sponge was cut to approximately the size of the lesion and was inserted between the serosal layer of the inverted lesion and the continuous serosal suture line. The lesion was removed by careful endoscopic mucosal dissection. The resected lesion and sponge were removed perorally. Finally, the mucosal edges were closed with several endoscopic clips (Fig. 2).

The patient characteristics, surgical outcomes, postoperative courses, results of the histopathological examination and short-term outcomes were analyzed in LECS and NEWS. Data are expressed as mean ± standard error of the mean. Statistical analysis was performed using the χ2 test and Fisher's test for categorical data and the Mann-Whitney U test for continuous data. All data were analyzed with SPSS 22.0 (IBM Corp.). P<0.005 was considered to indicate statistically significant differences.

Several studies on the R0 resection of SETs without evidence of lymph node and distant metastasis using the endoscopic and laparoscopic approaches to reduce morbidity report these methods as challenging and under development. The advantages of performing intraluminal and intraperitoneal procedures during the same operation are minimal invasion and precise resection at the tumor margin. Hiki et al (7) first reported LECS as a safe minimally invasive procedure that maintained the patients' quality of life by resecting a lesion with minimal margins and preserving gastric function. NEWS is a novel technique developed and published by Goto et al (17), which includes a minimally invasive procedure that removes the tumor perorally with full-thickness resection of the gastric wall, thereby avoiding the risk of intraperitoneal seeding. In our institute, LECS was performed for upper SETs >3 cm in diameter, and NEWS was employed for SETs <3 cm due to the peroral removal, as previously reported (9,13,14).

The mean specimen area/tumor area ratio did not differ significantly between the two groups, reflecting the avoidance of excessive, unnecessary resection and precise cutting of the lesion. The operative duration of both techniques was also not significantly different, but the intraoperative blood loss was higher in the LECS group compared with that in the NEWS group, which was attributed to the tumor size and area of resection. Both techniques are effective and minimally invasive, and achieved R0 resection without recurrence, a short length of hospital stay and lack of adverse events. However, the LECS group had higher WBC compared with the NEWS group on the 1st postoperative day, as well as higher mean 1st postoperative day WBC/preoperative WBC ratio and CRP levels, reflecting the inflammatory process. The procedure of LECS includes dissecting the lesion and removing the resected specimen via the abdominal incision. The process of LECS also involves a step of transmural communication, meaning that the intraperitoneal cavity may be exposed to the gastrointestinal fluid. The cautious and delicate handling of the tissues during surgery is crucial for minimizing the contamination risk of the LECS procedure. The NEWS technique involves resecting a non-exposed tumor and removing it via the oral route, which prevents activation of the inflammatory process by peritoneal contamination. The patients in the NEWS group had lower levels of inflammatory markers and shorter postoperative hospitalization. The limitation of this study lies with its inability to draw definitive conclusions on the advantages of each technique in terms of patient characteristics, surgical outcomes and postoperative course, due to the limited number of cases in the LECS and NEWS groups. The aim of the present study was to report our early experience with laparoscopy-assisted EFTR in Thailand, and the results were in accordance with the first reports of this technique in previous studies (11,14,23).

In conclusion, the present study successfully demonstrated that laparoscopy-assisted EFTR by LECS and NEWS may be a feasible and safe minimally invasive treatment option for upper gastrointestinal SETs. NEWS is the non-exposed technique, which is preferred if the lesion is sized <3 cm. This study describes early findings and its main limitation is the small patient sample. Further studies are required to verify that LECS and NEWS can be introduced as the standard treatment for small gastric and duodenal tumors in Thailand.

The present study was approved by the Human Ethics Committee of Thammasat University (Faculty of Medicine) (Pathumthani, Thailand); reference no. MTU-EC-SU-1-170/60. All the patients in this study provided consent to the use of their clinical data for scientific and academic purposes. 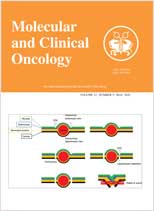