Prostate cancer (PCa) is the most common type of solid neoplasm in males (1). When radical prostatectomy (RP) is selected as a treatment for localized PCa, the prognosis is generally favorable (2). However, postoperative biochemical recurrence (BCR) occurs in 16-31% of patients within 5 years and in 25-53% within 10 years (3-5). Certain cases develop into castration-resistant PCa after clinical recurrence, frequently leading to poor outcomes. Thus, BCR is often used to justify the application of salvage therapies, such as endocrine therapy and radiotherapy.

Certain studies have identified various predictive factors for BCR. BCR after prostatectomy has been associated with multiple factors, including the preoperative prostate-specific antigen (PSA) score, positive surgical margins (PSM), the Gleason score (GS) at prostatectomy and pathological staging. Of these, PSM is the most important predictive factor for BCR (6-13). Certain patients with PSM have favorable prognosis after undergoing surgery alone, while others require salvage therapy immediately after surgery and have poor prognosis (14-16). Therefore, patients with PSM are considered to be a highly diverse group and the significance of PSM after RP remains controversial. This finding suggests the requirement for further subclassification of positive margins to identify patients with an elevated risk of BCR. However, only a small number of studies have reported on predictive factors for PSM and BCR in patients with PSM (17). In addition, studies evaluating the usefulness of the GS of the tumor at the margin in RP are currently scarce.

The present study aimed to investigate the preoperative factors that predict PSM and the significant predictive factors for BCR in cases with PSM. In addition, it was examined whether documenting the GS of the tumor at the margin in pathological reports is useful as a predictive factor for BCR.

Patients (n=241) who underwent prostatectomy at Kurume University Hospital (Kurume, Japan) between January 2007 and December 2011 were enrolled in the present study. Most of the surgeries during this period were open procedures. Patients who had received preoperative hormone therapy and/or radiation therapy and those with pathological T stage 0 (pT0) were excluded. As a part of this study, the pathological diagnoses of the patients were re-examined. All patients were pathologically diagnosed with prostatic adenocarcinoma. Histopathological evaluations were performed by three pathologists (HK, KU and HY). Pathological diagnosis was made according to the 2016 World Health Organization Classification of Tumors of the Urinary System and Male Genital Organs (18).

The prostatectomy specimens were pinned to a paraffin block and fixed in 10% formalin for a minimum of 48 h and inked on the surface. Paraffin-embedded tissue samples were cut into sections of 4-µm in thickness and examined on coated glass slides. A positive margin was defined as tumor cells abutting the inked surgical margin of the prostate apex, periphery and bladder neck. The GS of the tumor at the PSM was evaluated at the site in contact with the inked margin; when it was difficult to evaluate the GS at the PSM due to heat denaturation, it was evaluated using the continuous non-denaturing site GS (Fig. 1). PSM length was defined as the total length of the tumor in contact with the inked margin. When multiple PSMs were present, the added length of all margins was calculated.

The present study was approved by the Research Ethics Committee of Kurume University (Kurume, Japan) and conformed to the guidelines of the Declaration of Helsinki.

The associations between the margin status and GS of the tumor at the margin and clinicopathological characteristics were examined using the χ2 test or Fisher's exact test. Cancer survival analysis was performed using the Kaplan-Meier method, log-rank test and Cox's proportional hazards model. The threshold for statistical significance was set at P<0.05. BCR was defined as an increase in PSA level (>0.2 ng/ml) after two different measurements at least 3 months apart. For PSA, 10 ng/ml was used as the cutoff value that was classified as indicative of an intermediate risk in the D'Amico risk classification (7). For the positive core percentage and PSA density, the median was used as the cutoff value. JMP® Pro 14 software (SAS Institute, Inc.) was used to perform all statistical analyses.

Of the 241 patients who had undergone RP, 122 had at least one PSM. The median follow-up period was 72 months. The characteristics of the entire RP cohort, the subset of patients with PSM and the subset with negative surgical margins (NSM) are provided in Table I. Higher PSA level at diagnosis, GS at prostatectomy and pathological T stage, as well as BCR, were more frequently identified in patients with PSM than in those with NSM (all P<0.05).

[i] Values are expressed as n (%) or the median (range) for age and total PSA. PSA, prostate-specific antigen.

Kaplan-Meier curves demonstrated that the time to BCR was significantly shorter in patients with PSM than in those with NSM (Fig. 2). Univariate and multivariate analyses for preoperative predictive factors for PSM in RP are presented in Table II. Univariate analysis revealed that >10 ng/ml PSA at diagnosis, PSA density of >0.29 ng/ml/ml, GS at biopsy, clinical T stage, PSA density >0.29 and >25% positive core at biopsy were significant predictors for PSM. Furthermore, multivariate analysis demonstrated that >10 ng/ml PSA at diagnosis and >25% positive core at biopsy were independent prognostic preoperative factors for PSM.

Correlation of GS between the tumor at the margin and the main tumor.

[i] Values are expressed as the number of patients. GS, Gleason score.

Association of the GS of the positive surgical margin with other variables in the cohort (n=122).

Univariate and multivariate analysis for time to biochemical recurrence.

PSM is considered the most significant risk factor for BCR after RP. Stephenson et al (19) reported that the PSM was a predictor for BCR based on the result of a multivariate analysis in a large-scale multicenter study involving >7,000 individuals. In addition, Wright et al (20) reported that in cases with PSM, the risk of BCR is 3.7 times higher and the risk of PCa-associated death is 1.7 times higher.

Among the predictors of PSM, identifying the preoperative risk factors may prevent BCR through the implementation of more careful surgical manipulation during surgery. Some preoperative factors have been reported previously, as in previous studies, PSA >10 ng/ml and a biopsy-positive rate of >25% were the factors identified in the present study.

Preston et al (21) reported that among patients with localized PCa with a PSM, the disease-free survival in extraprostatic extention (EPE)+ patients with a negative resection margin was short. The importance of determining the appropriate dissection layer and resection site was confirmed. In the present study, the biochemical non-recurrent survival curves of 122 patients with PSM and 119 with NSM were compared and the incidence of BCR was indicated to be significantly higher in those with PSM.

The frequency of progression to clinical recurrence from BCR without treatment was 34% (22). In addition, hormone and radiation therapy were performed as salvage therapy for BCR. For radiotherapy in particular, improvement in cancer-specific survival has been reported (23,24). The results of the EORTC22911 trial reported improved clinical progression in the postoperative adjuvant radiotherapy group over a follow-up period of >5 years after RP (25). Furthermore, to identify the factors related to the effects of postoperative adjuvant radiotherapy, GS, seminal vesicular infiltration, pT stage, EPE and PSM were re-examined using isolated RP specimens of 522 individuals (26). They reported that only PSM was a prognostic factor. With this background, the present study examined risk factors for the purpose of extracting the PSM cases, particularly those that were highly likely to have BCR.

GS is generally used as an indicator of the grade of histopathological malignancy. GS in isolated specimens, in particular, exhibits a more accurate malignancy grade (7). Resnick et al (27) reported that GS in the excised specimen is a risk factor for BCR, even in PSM cases. In recent years, certain studies have reported that the GS of the tumor at the PSM is also a predictor for BCR (28,29). Udo et al (30) reported that the incidence of BCR increases when the PSM site contains Gleason grade 4 or higher tissues. In particular, cases with Gleason grade 4 tumors at the PSM have more BCRs than those with only grade 3 tumors (31).

According to the margin length, Marks et al (33) reported no significant difference between the extent of PSM and BCR. By contrast, Cao et al (34) indicated that the linear length of a PSM was an independent prognostic factor for BCR in stage pT2 cancers. Certain studies have reported a standard linear PSM length of 1 mm, while others have reported a standard length of 3 mm; the impact of the PSM length is still under debate. From the viewpoint of pathologists, measuring the length of multiple positive sites is time-consuming and labor-intensive. Even in the present study, the length of the positive margin site was not a predictor for BCR.

Several limitations of the present study should be acknowledged. First, in this study, PSM was present in 122/241 patients and this proportion is high. The reasons for this may be that about one-third of these cases were at high-risk according to the D'Amico classification and that most of the surgical procedures were open surgeries. Further studies on other surgical procedures (endoscopic/robot-assisted surgery) are required. Furthermore, the length of the tumor was evaluated; however, the width of the tumor was not considered when evaluating the GS of the tumor at the margin in the present study. At our hospital, the width is unified at 3.5 mm according to Japanese guidelines (35). As the width of all specimens was almost the same, the width was not considered in the present study.

The authors would like to thank Ms. Sachiko Ogasawara (Department of Pathology, Kurume University School of Medicine, Kurume, Japan) for providing technical assistance.

The datasets used and/or analysis during the current study are available from the corresponding author on reasonable request.

HK, KU, MM, SS and TI designed the study. HK, NO, KC, MN and KN performed the research. HK, JA and HY contributed to the pathological analysis. HK analyzed the data and wrote the manuscript. MM, SS, and TI agree to be accountable for all aspects of the work in ensuring that questions related to the accuracy or integrity of any part of the work are appropriately investigated. HK and KU checked and approved the authenticity of the raw data. All authors read and approved the final manuscript.

The present study was approved by the Ethics committee at Kurume University (Kurume, Japan). The Ethics Committee waived the requirement for obtaining written informed consent for the cases as the data of these patients were retrospectively analyzed. 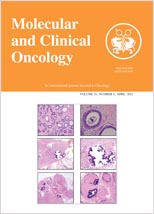