Abstract. Gastric cancer (GC) is the fifth most commonly diagnosed malignancy and the fourth leading cause of cancer death worldwide. Skin metastases from internal organs are rare; skin metastasis from GC occurs even more rarely than skin metastases originating from other organs, and is associated with systematic disease and poor prognosis. The present study described an interesting and rare case of an extensive skin rash in a 42-year-old man diagnosed with GC, which was mainly affecting his left hemithorax, abdomen and back. The rash masqueraded as erysipelas and was initially treated as such; however, it did not respond to antibiotics, corticosteroids and antihistamines. Due to its persistence and location, the rash was biopsied and GC metastasis was confirmed. Third-line chemotherapy was administered and the rash decreased in size; however, the patient suffered from disease deterioration with lung metastases and respiratory failure. The patient eventually died 4 months after the diagnosis of skin metastasis. In conclusion, cutaneous metastasis should be considered as a late and difficult to treat metastasis of GC, which requires high surveillance from medical oncologists, and a multidisciplinary approach for prompt and accurate diagnosis.

Gastric cancer (GC) is the fifth most frequently diagnosed type of malignancy and the fourth cause of cancer death worldwide; in 2020, 1,09 million new cases were diagnosed and 769,000 deaths were attributed to this tumor type (1). GC is a highly heterogeneous disease displaying genetic and molecular alterations (2) with a median overall survival of ≤12 months for advanced stage (3). The most common site of metastasis is the liver, followed by the lungs, bone, and the peritoneum (4,5). Multidiscipline management is the treatment of choice in GC while surgical resection enhanced by standardized lymphadenectomy remains the gold standard towards GC therapy (6,7).

According to the World Health Organization, GC can be classified as adenocarcinoma, signet ring-cell carcinoma (SRCC), and undifferentiated carcinoma (7). Despite that currently the overall prevalence has decreased (7), a number of studies indicate that the incidence of the SRCC subtype has been constantly increasing (8,9). Furthermore, SRCC seems to demonstrate a pattern of specific signatures that may be associated with poor response to systematic treatment; for example, it exhibits less chemosensitivity to the ‘traditional’ therapy regimens (i.e. epirubicin, cisplatin, and fluorouracil), whereas it appears to have greater sensitivity to taxane-based chemotherapy (10). Poor prognosis may also be attributed to the fact that most patients present quite late in the course of the disease when progression may already be present (11).

The exact underlying mechanisms for the development of GC remain not well understood. Some reports in the existing literature implicate i) alterations in immune function or an underlying immunodeficiency, ii) the presence of pathogens, iii) molecular biological abnormalities and iv) genetic predisposition (2,12-14). Moreover, several risk factors have been described such as alcohol intake and obesity, whereas approximately 70% of GC cases have been correlated with H. pylori infection (13). Positive correlations between Epstein-Barr virus (EBV) infection and gastric carcinoma have also been reported (14). In addition, genetic disorders (i.e. familial adenomatous polyposis and hereditary nonpolyposis colorectal cancer) have been also linked with gastric tumorigenesis (2). Finally, the treatment of a primary gastric lymphoma has been also associated with increased risk for developing gastric adenocarcinomas (15).

Cutaneous metastases develop in 0.7-9% of patients with internal cancers. The most common primary site is the breast, followed by the lung and colon (5). Skin metastases originating from systemic cancer typically present as nodular, nontender, firm, erythematous or pigmented lesions, with increased vascularity or ulceration (16). Less frequently, they appear like cellulitis, erysipelas (carcinoma erysipeloides) or other unusual morphologies (17). Skin metastasis from GC rarely occurs with an incidence of approximately 0.8-1.0%. In this article, we describe an interesting and rare case of an extensive skin rash masquerading as erysipelas which was eventually identified as gastric cancer metastases. The patient gave fully informed written consent to the publication of this report and any accompanying images.

Α 42-year old man presented to a general hospital (Elpis Hospital, Athens, Greece; November 2018) because of several abnormally enlarged left cervical and supraclavicular lymph nodes (LNs). The patient had also a two-month history of dyspepsia and gastroesophageal reflux. He was a 30 pack-year smoker (approximately one and a half pack daily) and had a previous medical history of two ischemic strokes. His father was diagnosed and died from gastric cancer at the age of 50. The FNA (November 2018) was positive for metastatic involvement of the examined lymph node from a low-grade carcinoma of unknown origin. The esophagogastroduodenoscopy revealed a crater-like, circular lesion in the prepyloric antrum, with an ulcer of about 10 mm in diameter; the lesion was bleeding, while it caused stenosis in antrum and pylorus; extensive gastritis was also confirmed in the stomach corpus and fundus. Microscopic examination revealed a poorly differentiated adenocarcinoma with multiple signet ring cells; H. pylori test was negative. Subsequently, the patient was referred to our hospital for further treatment (General Oncology Hospital of Kifissia ‘Agioi Anargiroi’, Athens, Greece; December 2018).

CT and MRI scans revealed a 38 mm lesion in the pylorus, the presence of a lymph node block [diameter (d)=30 mm] by the aorta and multiple LNs in the left perihepatic space (d=22 mm). Ascites, liver metastasis or peritoneal carcinomatosis were not confirmed. Moreover, thrombosis of the left subclavian vein, enlarged left cervical (d=20 mm) and supraclavicular LNs (d=13 mm) were reported. The tumor was characterized inoperable at that time and capecitabine-oxaliplatin chemotherapy (XELOX regimen) was initiated (December 2018). The treatment effects were classified as partial response according to Response Evaluation Criteria in Solid Tumors version 1.1 and the patient received six cycles of XELOX. However, in April 2019 the patient developed subcutaneous oedema in the left ambit, sub- and supraclavicular space, as well as multiple palpable LNs and oedema in the left cervical space (lymphoedema); paclitaxel-ramucirumab were administered due to disease progression; he received a total of nine cycles.

In January 2020, the patient presented with an extensive rash in his left hemithorax, abdomen and back (especially on the left) accompanied by mild pruritus and low fever (Fig. 1). On examination, the rash was hard but painless in palpation with large erythematous plaques but no skin ulceration; it was initially considered as erysipelas, but it did not respond to pharmaceutical therapy with antibiotics, corticosteroids and antihistamines (Fig. 2). The patient also developed ascites, and thrombosis of the external iliac and femoral vein, whereas the subcutaneous oedema was constantly deteriorating. Two weeks later, there was no clinical improvement, and a skin biopsy was obtained and confirmed the diagnosis of a low-grade carcinoma, consistent with metastasis from the known gastric cancer [AE1/3(+), CDX-2(+), CK20(-), CK7(+), and HER2(-)]. The treatment regimen switched to 5-FU, irinotecan and folinic acid (FOLFIRI), and the patient's rash decreased in size after three cycles; nonetheless, the patient suffered from disease deterioration with lung metastases, pleural effusion (chylothorax), respiratory failure and eventually died four months after the diagnosis of the skin metastasis.

According to previous observations, poorly differentiated adenocarcinoma with signet-ring cell features can be linked with the development of skin metastases. The pathogenesis of cutaneous metastasis remains unclear. Some potential mechanisms that have been implicated are i) hematogenous or lymphatic spread, ii) direct invasion of gastric cancer (consistent with the most frequent sites of cutaneous metastases), and iii) intraoperative implantation of cancer cells into the skin (surgical scars are also quite common sites due to iatrogenic implantation) (5). Regarding our patient, the first two mechanisms seem most relevant.

Between 2013-2020, according to Şahin et al, only ten cases have been reported in Pubmed database. The most common metastatic sites include the neck, the back, the abdomen, and the inguinal region; the lesions may evolve as single or multiple nodules with an erysipelas-like morphology (also confirmed in our patient). Gender-wise, men have been suggested to have a higher risk for developing skin metastases (18).

In cases of cutaneous metastasis originating from primary gastric cancer, the prognosis is poor. In six out of the ten described case reports, the survival time after diagnosis of skin metastases was reported to be between 1-16 months (18). Treatment plans vary depending on the extent of the cutaneous lesions and the systemic disease, as well as the performance status of the patient; they usually include local excision, irradiation, or systemic chemotherapy. To conclude, better prognosis has been associated with patients with a completely resectable cutaneous metastasis in the setting of a good primary tumor control (16).

Although uncommon, a skin lesion either upon diagnosis or during the course of the disease, should always raise suspicion for metastasis and a biopsy specimen should be obtained as soon as possible for further evaluation. In any case, a multidisciplinary approach and close collaboration between medical oncologists and dermatologists are of great significance.

The patient gave fully informed written consent for the publication of the present case report and accompanying images. 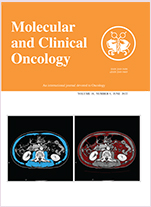