Association between obesity and frequency of high‑grade prostate cancer on biopsy in men: A single‑center retrospective study

The present study aimed to investigate the relationship between BMI and the prostate cancer (PCa) risk at biopsy in Italian men. Retrospective analyses of the clinical data of 2,372 consecutive men undergoing ultrasound‑guided multicore (≥10) prostate biopsy transrectally between May 2010 and December 2018 were performed. BMIs were categorized, according to Western countries' classification of obesity, as follows: <18.5 kg/m2 (underweight), 18.5‑24.99 kg/m2 (normal weight), 25‑30 kg/m2 (overweight) and >30 kg/m2 (obese). The distribution of patients undergoing biopsy was compared with a model population from the official survey data. Patient characteristics and the relationships between characteristics were investigated using correlation analysis, ANOVA, Kruskal‑Wallis and Dunn's tests. The present study estimated the influence on cancer incidence not only of BMI but also of other patient characteristics using multi‑variable logistic modelling and compared, using the models, the expected outcomes for patients who differed only in BMI. From a sample of 2,372 men, the present study enrolled 1,079 men due to a lack of clinical data [such as prostate specific antigen (PSA) and BMI data] in the other patients undergoing prostate biopsy. Their distribution was significantly different from the model distribution with the probability of undergoing biopsy increasing with increasing BMI. The median age was 69.4 years. The median BMI was 26.4 kg/m2, while the median PSA level was 7.60 ng/ml. In total, the biopsies detected PCa in 320 men (29.7%) and high‑grade PCa (HGPCa) in 218 men (20.2%). Upon applying the aforementioned Western countries' criteria for BMI categories, there were 4 (0.4%) underweight, 318 (29.5%) of normal weight, 546 (50.6%) overweight, and 211 (19.6%) obese patients. ANOVA/Kruskal‑Wallis tests revealed that overweight and obese men were younger than the normal‑weight men, while there was no statistical difference in their PSA values. Furthermore, 29.3% of normal‑weight men, 29.5% of overweight men and 29.9% of obese men were diagnosed with PCa, while 19.5% of normal‑weight men, 20.1% of overweight men and 21.8% of obese men were affected by severe cancer. BMI was found to be positively correlated with PCa risk and negatively correlated with both age and PSA level. Age and PSA level were both positively correlated with PCa risk, while digital rectal examination (DRE) outcome was strongly indicative of PCa discovery if the test outcome was positive. Logistics models attributed a positive coefficient to BMI when evaluated against both PCa risk and HGPCa risk. In patients having a negative DRE outcome who differed only in BMI, logistic regression showed a 60% increased risk of PCa diagnosis in obese patients compared with in normal‑weight patients. This risk difference increased when other characteristics were less indicative of PCa (younger age/lower PSA), while it decreased when patient characteristics were more indicative (older age/higher PSA, positive DRE). In conclusion, the present study demonstrated that, in men with higher BMIs, the risk of PCa is higher. The relative difference in risk between low and high BMI is most pronounced in younger patients having a lower PSA level and a negative DRE outcome. 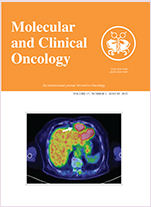